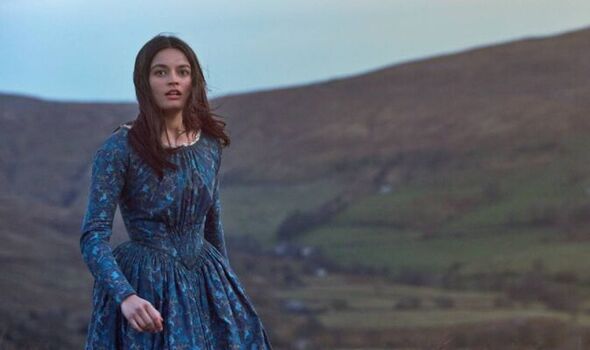 As the episode makes clear, many laces have to be undone, much to the frustration of Emily and her 19th-century “hot priest” – desperate to be naked and in each other’s arms. In fact, it perfectly sums up the new film. And anyone expecting Emily to be a sober-sided, sedate biopic of the celebrated writer will be disappointed.

So far as we know the real Emily Brontë led a relatively sheltered life, but this Emily enjoys sex, drugs and, although rock ’n’ roll is some way off in the future, she is a demon on the piano. She even gets a tattoo.

The writer and director Frances O’Connor, previously best known as an actor, has made clear the film is a free-flowing mix of fact and fiction, a reimagining of Emily’s life.

But we are left in no doubt that O’Connor, who has been developing this project for the past decade, is more than a little in love with her subject.

“I could’ve told a story that was a straight biography, but I felt that’s been done. I was more interested in finding a way to celebrate who Emily is, that’s connected to Wuthering Heights and is more strongly narrative in a way that is a little like a fairy tale.”

Emily is, in a sense, a Wuthering Heights origin story and O’Connor ingeniously suggests the possible inspiration for a number of elements in one of the greatest novels ever written.

The film opens with Emily on her deathbed and her older sister Charlotte, author of Jane Eyre and no literary slouch herself, asking: “How did you write it? How did you write Wuthering Heights?”

It’s a clever starting point because anyone who has ever read the novel has wondered exactly the same thing.

How could such a nice, young, middle-class woman write such a strange, haunting novel, a saga of violence and sadism in which, amongst many other terrible things, a small dog is hung and a waif – albeit a spectral waif – has her wrist forced on to a broken window pane and rubbed back and forth “till the blood ran down and soaked the bedclothes”.

And that’s to say nothing of the piquant hint of necrophilia.

Then the film flashes back and we learn about Emily’s life in Haworth, West Yorkshire, where she lived in the parsonage with her family.

She has an often difficult relationship with her older sister Charlotte but adores their brother Branwell, who becomes increasingly dissolute as the story progresses.

We see the development of her love affair with the curate William Weightman who assists her father, the Reverend Patrick Brontë, and tutors her in French.

Emily is a dreamer who lives in her own head and hates being forced to meet new people.

She’s known to the locals as “the strange one”, as Charlotte cruelly reminds her.

She’s happiest, at least at the start of the film, when making up her highly detailed fantasies or out wandering on the – as Kate Bush had it in her hit pop song – “wily, windy moors”.

Emily is thrillingly played by French-British actress Emma Mackey, from Netflix’s Sex Education. Mackey is a magnetic screen presence who can convey Emily’s innermost thoughts with a movement of her eyes or a tightening of her expression.

She is the focal point of every scene she’s in, which is most of them. It will be exciting to watch how her acting career and O’Connor’s directing career – this is her directorial debut – progress after this.

And although the film makes free with facts, there is also much in it that is completely accurate.

For example, all three sisters (Anne is the youngest) really did receive Valentine cards from Weightman, who is very loosely based on the real curate.

Perhaps one of the most surprising things is that there are several laugh-out-loud moments and we don’t usually associate humour with the Brontës’ tragic story.

The second youngest of six children, Emily was born in 1818.

Her mother’s death in 1821 was followed by the deaths from tuberculosis of the two eldest Brontë siblings, Maria, aged 11, and Elizabeth, aged 10, in 1825.

The surviving three Brontë sisters would all publish their first novels in the same year, 1847; Charlotte with Jane Eyre, Anne with Agnes Grey and Emily with Wuthering Heights.

It turned out to be Emily’s only novel.

She died the following year, also of tuberculosis, three months after catching a cold at Branwell’s funeral. She was just 30.

But apart from these basic biographical details, we don’t know very much at all for certain about enigmatic Emily, dubbed the “sphinx of modern literature” by one critic.

According to Juliet Barker, acclaimed expert and author of The Brontës: “The known facts of their [Emily and Anne’s] lives could be written on a single sheet of paper.”

Brontë scholar Dr Claire O’Callaghan, author of Emily Brontë Reappraised, told the Express: “Apart from Wuthering Heights and Emily’s poetry and a couple of little diary papers there is no actual other biographical information.”

“So there is a massive void when it comes to her personal views on friends, family or whether there was anybody that she was interested in romantically. There’s just nothing there.”

Much of what little we do know has been relayed to us by Charlotte, who was possibly not the most reliable witness.

“It is a compound of vulgar depravity and unnatural horrors,” wrote one. Another suggested that it should be burned.

Charlotte famously distanced herself from the book when, after Emily’s death, she wrote a po-faced preface to the second edition.

“Whether it is right or advisable to create beings like Heathcliff, I do not know: I scarcely think it is,” she wrote, and suggested Wuthering Heights was an “immature” work.

Yet within a couple of years of Emily’s death, the critical reappraisal of her novel had begun with, in 1850, one critic declaring it “the unformed writing of a giant’s hand; the large utterance of a baby god” and “the masterpiece of a poet”.

Some admirers of the Brontës feel you’re either a Jane Eyre person or a Wuthering Heights person but you can’t be both.

“There’s often a kind of ‘pick your team’ attitude and people are either Team Emily or Team Charlotte. Poor Anne often doesn’t get a look-in,” says O’Callaghan.

“This film does present Charlotte as very bossy and uptight and a very guarded older sister. But you also get moments of tenderness between them [Emily and Charlotte]. I suspect some Charlotte fans might feel a little bit defensive.”

And some members of “Team Emily” might feel that O’Connor’s artistic licence has tipped over into taking liberties. That would be a shame because the film is certainly true to the spirit of Emily’s work, if not the letter of her life.

Emily is now said to be as brilliant a poet as she was a novelist and she continues to have a huge influence on both high culture and popular culture.

The great 19th-century American poet Emily Dickinson asked that one of Emily Brontë’s poems be read at her funeral. There’s the famous Kate Bush song, of course.

The folk group The Unthanks set 10 of her poems to music, and played on Emily’s own piano. Twilight author Stephenie Meyer says her third novel in the series, Eclipse, was inspired by Wuthering Heights.

Sylvia Plath wrote a poem called Wuthering Heights and sketched Top Withens, the derelict farm building said to be the model for the house in the book.

Monty Python had a sketch about “the semaphore version of Wuthering Heights”.

“The Brontës are beloved,” says O’Callaghan. “When you put them on screen and you see the conditions under which they’re writing and the family dynamics, people are just drawn to the story.

“One of the things that is great about this film is the fact that it’s bringing the Brontës and especially Emily to a 21st century audience.”

“Emily normally has such a negative press as being difficult and weird but this movie really celebrates the fact that she is a little bit different and that she is her own woman.”