A timely primer given the disdain or denial that greets successful Indigenous athletes in this country, this two-part documentary details the life of Jackie Robinson, who in 1947 desegregated Major League Baseball in America when he played for the Brooklyn Dodgers. That moment inspired the 2013 feature film 42, with future Black Panther Chadwick Boseman as Robinson, but this documentary applies the successful hallmarks of co-director Ken Burns – compassion, scrupulous archival detail, vivid narration – to Robinson's story. The focus, as ever, is America's struggle to change, but even with Robinson's involvement in the Civil Rights movement, this is a smaller lens than some of Burns' work. The resulting intimacy is powerful. 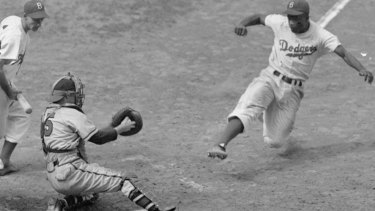 Jackie Robinson in action with his trademark home-base steal in 1948.Credit:AP