Outlander season six has been given the green light for Starz, with season five ending in May 2020. The next instalment of the historical drama series will be based on the book A Breath of Snow and Ashes. Jamie Fraser (played by Sam Heughan) is a fan-favourite and the star opened up about his iconic sex scenes.

Jamie Fraser is one of the main stars of the Diana Gabaldon novels and subsequently the popular TV adaptation.

The Highland warrior fell in love with wartime nurse Claire Randall (Caitriona Balfe) and they experienced a harrowing plot twist at the end of the fifth season.

Claire was raped by Lionel Brown (Ned Dennehy), but she was luckily rescued by Jamie and others.

The series is known for its racy scenes and Jamie star Heughan spoke on The Kelly Clarkson Show about his family’s reaction.

The star said his mother was proud of the show, but joked she would “probably fast-forward” through the sex scenes.

Fans have gone as far as creating lists of the best Jamie and Claire sex scenes of all time.

One of the most popular is on the couple’s wedding night, which was the first time they showed intimacy.

Speaking to Kelly Clarkson, Heughan said: “So when I grew up we had a black and white television, it was one of those ones where you had to turn the dial to tune in.

“She refused to buy a new one until I actually left home and moved to university, at which point she bought a 4K high-def colour screen TV.

“She is very, very proud of the show but I think she does probably fast-forward most of those scenes.”

According to marriedceleb.com his mother, Chrissie Heughan, is a freelance art teacher.

Chrissie, who lives in Edinburgh, is a professional artist who works with hand-cast paper and sculpture.

She rose to prominence as the mother of Sam and she is definitely proud of his achievements.

Back in February 2020 Heughan and Balfe spoke to Sling TV about filming sex scenes and keeping the passion alive.

The Jamie star said: “We have always tried to approach them with something more and show the development of their relationship. 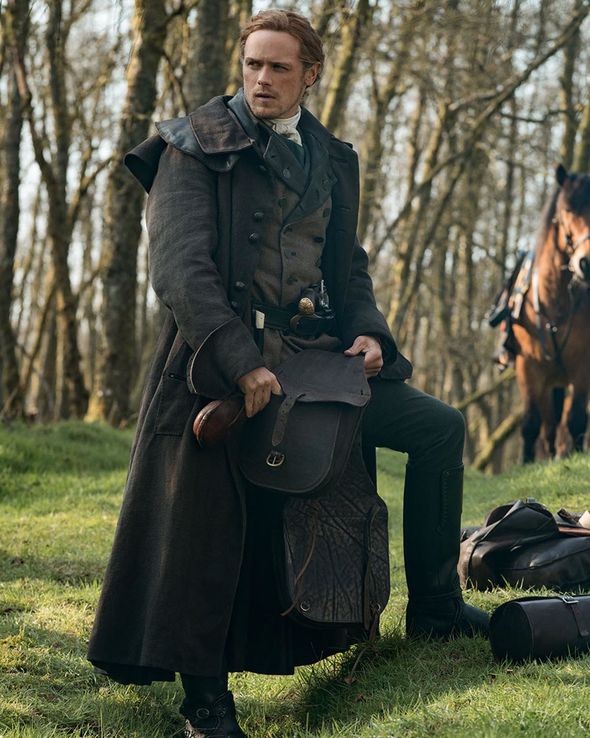 “Obviously it’s a part of the show that we have to deal with.” Balfe said they had always tried to make the sex scenes “further the story along”.

She admitted the couple were “passionate” but said it was an integral part of their relationship, and the racy scenes were there for a reason.

Heughan added: “We are a couple now in our latter years, we are probably in the prime, actually.”

Balfe said it was nice to see how even after so many years of marriage, they could still be as romantic with each other.

The sex scenes are often the biggest talking points in interviews as they play a prominent role in the series.

Fans went as far as to say they prefer the Outlander sex scenes to those in the scandalous Netflix romance drama – Bridgerton.

Heughan said there had been many stand-out moments from the series so far during a question and answer session with fans.

He said: “Outlander has certainly been my life and there are a lot of great moments. To be honest I think the opportunity it’s given me has been incredible.”