“I thought it was too nakedly political,” series creator Billy Ray tweets. “Now I wish I had left it in” 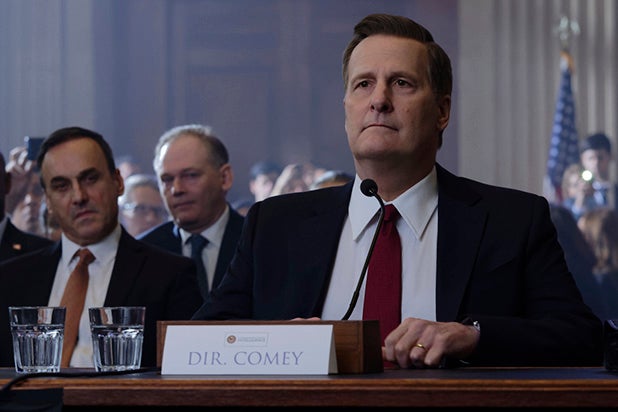 In the scene, which you can watch below, one of Comey’s men asks him, “Boss, what happens now?” on the FBI plane as they fly back from Los Angeles following POTUS’ firing of Comey. “To me?” Comey asks. “To us, to the country,” his report responds.

“What happens is the president will win for a while, but he’ll keep lying anyway because that’s who he is,” Daniels’ Comey says. “He’ll lie about everything he wishes not to be true until the American people decide they’ve had enough. We’ll be fine.”

“Comey Rule” showrunner Ray shared the scene on Twitter Saturday, writing: “I cut this scene from the final version of #TheComeyRule b/c I thought it was too nakedly political. Now I wish I had left it in. It takes place on the @FBI plane as @Comey returns from LA after being fired by the guy who used to be President Trump. Enjoy!”

Ray’s tweet comes on the heels of this week’s attack on the Capitol by Trump supporters as Congress was counting the votes to certify President-elect Joe Biden’s November win. The siege was encouraged by Trump, who was banned from Twitter Friday “due to the risk of further incitement of violence.”

“The Comey Rule,” which aired over two nights last September, is based Comey’s memoir, “A Higher Loyalty,” which was released in April 2018 by Flatiron Books. It gets its title from Trump’s reported desire for Comey to give him a loyalty pledge. Comey was first appointed FBI director by former President Barack Obama in 2013 and was fired by Trump less than a year into his presidency.

See Ray’s tweet with the cut “Comey Rule” scene below.