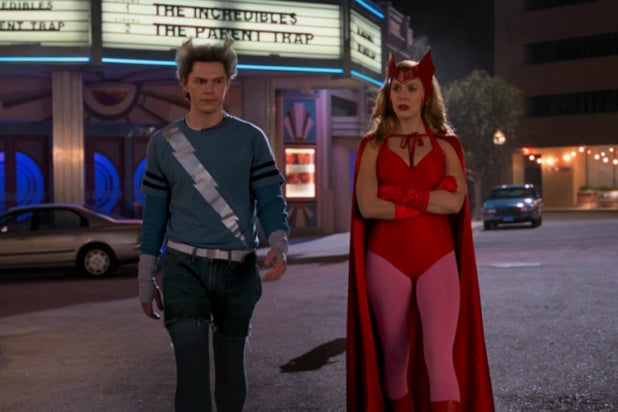 Since the Disney-Fox merger, fans have been wondering how the Marvel Cinematic Universe would bring the X-Men into the fold. Would they start over from scratch? Would they use the Marvel multiverse to bring the Fox versions of the characters directly? We might have gotten an answer on “WandaVision” last week when Evan Peters, who played Pietro Maximoff aka Quicksilver in the “X-Men” films “Days of Future Past,” “Apocalypse” and “Dark Phoenix,” showed up at the very end.

It’s the method that’s shocking — because Aaron Taylor-Johnson played Pietro in the MCU, not Peters. And so rather than Wanda (Elizabeth Olsen) bringing the MCU version of the character back to life the way she did with Vision (Paul Bettany), what we maybe, possibly just saw at the end of this episode of “WandaVision” is the Fox version crossing over.

But this week didn’t advance that plot much, dropping only the barest of hints about the whole situation. And certainly there was no big reveal here.

We have to consider the possibility that Marvel is messing with us here, especially with the way they are holding back most of the relevant info. So let’s consider the situation, starting with what we got this week in the sixth episode of “WandaVision.”

While the family is out trick-or-treating, Wanda and Pietro have a couple chats in which they discuss the situation had hand. The first time it comes up is when Wanda expresses her annoyance with Pietro because he keeps encouraging the twins to misbehave. And then we get this exchange, which is one of the big clues I mentioned in the headline.

Pietro: “I’m just trying to do my part, okay? Come to town unexpectedly, create tension with the brother-in-law, stir up trouble with the rugrats, and ultimately give you grief. I mean, that’s what you wanted, isn’t it?”

Wanda: “What happened to your accent?”

Pietro: “What happened to yours? The details are fuzzy, man. I got shot like a chump on the street for no reason at all, and the next thing I know I heard you calling me.”

There are two hints contained in those lines.

First, Pietro is quite literally saying here that he’s playing a role that she is making him play. He’s doing an Uncle Jesse, basically, performing his sitcom role.

Second, Pietro has the MCU version of Pietro’s memories, not the Fox “X-Men” version’s memories. More on that in a second, though.

So the question now is whether Evan Peters is playing the Fox version of Pietro brought over to the MCU as some kind of multiverse shenanigans, or  if this is all some kind of epic troll stunt casting from Marvel to mess with our heads. I don’t know what the truth is with this just yet, but let’s consider the situation in front of us.

Wanda — or someone — has seemingly dominated the minds of everyone in this town and forced them to play roles in a fake sitcom, and there’s certainly a distinct possibility that this is another example of that. Peters could be playing not Quicksilver, but rather a random dude who lived in that town and is now being forced to play the part of Quicksilver.

When Pietro revealed he remember dying in “Age of Ultron,” I initially thought that reinforced that idea. But a moment later I recalled an option that would allow Marvel to have its cake and eat it too: he could be the Fox version of Quicksilver yanked out of his own universe and forced to play the part of MCU Quicksilver.

Which brings me to the other big clue: Pietro ran really fast this week. This could be a point in favor of Evan Peters playing a real version of Pietro Maximoff and not just a nobody who became a puppet. But if Wanda could reanimate Vision’s corpse and restore his sentience, then it seems likely she could also give somebody superpowers.

The power of the Mind Stone, which is what gave Pietro his super speed in the MCU, is also contained within Wanda, after all.

Whatever the case, it seems like this week’s episode of “WandaVision” has at least nailed down the idea that this Pietro is playing a part like everyone else in Westview. Who this person is beneath that facade is another question entirely.

It’s really tough to feel confident about any particular option here, because this is kind of an odd point in the story to do something as monumental for the greater franchise like merging the MCU with Fox’s X-Men movieverse. There’s still three more episodes of “WandaVision” left, and there have not been any clues dropped about the multiverse over the course of the show so far. Aside from, you know, Pietro himself.

This twist is out of left field, rather than something that it felt like the show was building toward — especially now that we have a general idea of how this whole sitcom deal works. And dropping such a huge reveal as a cliffhanger at the end of last week’s episode, and then not really following up on it much, gives this plot thread a whiff of misdirection.

But on the other hand, Kevin Feige and co. absolutely know how fans are going to react to this whole deal, and they know how much of a punch to the gut it would be if a moment this highly anticipated turned out to just be a fakeout. This would be a pretty insane way to mess with the audience if they just brought in Evan Peters as a gag. And it would certainly frustrate fans.

The problem is that it’s tough to make a truly educated guess about this right now because there are still so many unknown variables. The big one is who’s in control of Westview. You might be tempted to think that answer is obvious, with Wanda popping out of Westview to threaten S.W.O.R.D. and Monica Rambeau (Teyonah Parris) last week.

Think again. The Wanda who went outside was using the character’s original Sokovian accent that she spoke with in “Ultron” and “Captain America: Civil War.” But she dropped the accent in favor of a standard American one in “Avengers: Infinity War,” and hadn’t used her original Sokovian one since then, including on “WandaVision” — except in this one scene. I’m not saying that was necessarily a fake Wanda, but it’s a big red flag that things are still not as they seem.

On top of that, there have been numerous clues that Wanda isn’t really in charge here. Her inability to remember the past in the first episode. Agnes having to function as a sort of tutorial for Westview in the second. And this week, Wanda had to beg her sons to not age themselves up after their dog died — not something you’d think she would have to do if she were controlling everything.

And this week, telling Pietro, “I don’t know how I did it,” after he asked her about this town she’s made.

Plus, I simply believed her when she told Vision last week that she didn’t make Pietro knock on her door. Her look of shock when she saw this ersatz version of her brother Pietro felt pretty convincing.

The leading theory for what’s going on on “WandaVision” is that Marvel is doing an adaptation of the “House of M” storyline from the comics.

At the heart of “House of M” was a demon named Mephisto. This is a guy who convinces people to sell their souls and manipulates humankind, and Mephisto can warp reality the same way Wanda can. Wanda unknowingly uses Mephisto’s disassembled soul to magically become pregnant (what with Vision being an android and all) and when Mephisto’s soul is reassembled, she loses her twins.

Wanda’s witch mentor, Agatha Harkness, then wipes her memory of having children to avoid her spiraling into cataclysmic grief, which basically backfires when those memories resurface years later, leading Wanda to rewrite reality to mold the world to her own happiness.

And the thought is that Agnes on “WandaVision” is the MCU version of Agatha. This week we had a rather odd scene with her and Vision, briefly meeting the real version of Agnes. Some fans might take this scene as proof she’s NOT Agatha, but that “all is lost” line gives me pause on jumping to any conclusions.

With so many variables — plus the MCU’s tendency to take a comic book premise and go in a totally new direction with it — anything remains possible. The fact that this Quicksilver reveal came smack in the middle of the season is a big part of why it’s difficult to confidently parse.

With so much left of the story still to go — we’ve got three episodes left to go — there are still not that many concrete clues to be found. And if years of theorizing about what’s next for the MCU for my job here has taught me anything, it’s that we should never trust a storyline to play out the way it did in the comics.