“When does a giant marshmallow Bill Barr show up?” one Twitter user jokes 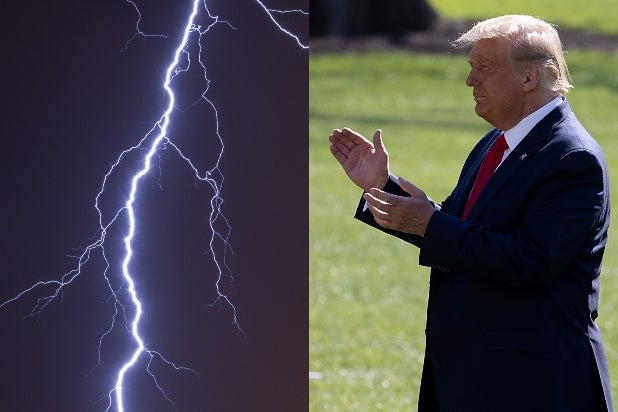 Even Mother Nature is reacting to the final presidential debate.

President Trump’s Chicago hotel was struck by what appears to be three simultaneous bolts of lightning on Thursday — though one Twitter user pointed out that it could just be one lightning strike followed by what are called “stepped leaders,” or a series of secondary strikes that commonly follow the first.

Photographer Barry Butler shared the image he took of the incredible early-morning incident on Twitter, writing: “Three Simultaneous Lightning Strikes on the Trump Hotel Chicago at 2:14am on Thursday.”

ABC 7 Chicago shared the image on its Twitter account where users sounded off in the comments with some pretty hilarious reactions to the ironic lightning strike that took place just hours before Trump is scheduled to face off against Joe Biden in the final presidential debate.

One user parodied the Trump administration’s proclivity for taking credit for things with this clever joke: “Trump Campaign: ‘We would like to thank President Trump for building the first hotel that safely attracts lightning so none of our citizens are ever stuck again. Lightning deaths are down almost 749% since Trump took office.’”

“When does a giant marshmallow Bill Barr show up?” wrote another user, referencing the Stay Puft marshmallow man who descends on the city in “Ghostbusters.”

The science whiz who made note of the previously mentioned scientific phenomena going on in the picture wrote: “Not to be ‘that guy’, but the fainter two look to be stepped leaders. The brightest flash is the return stroke. This happens all the time, it’s just how lighting works.”

Take a look at the image and more Twitter reactions here: