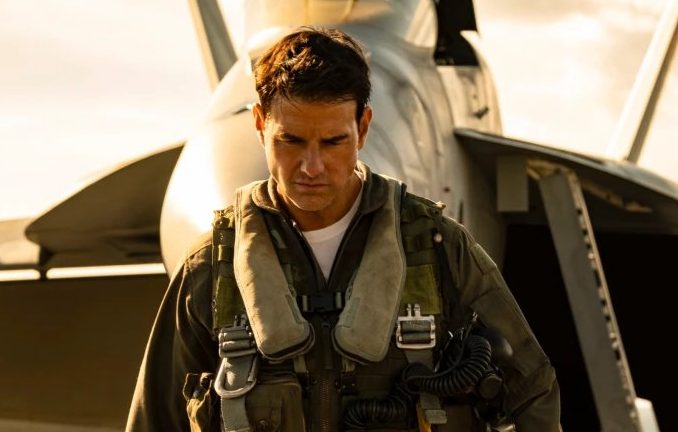 Top Gun: Maverick is at the centre of a lawsuit after Paramount was sued by the heirs of the author who wrote the article the original film was based on.

Released in 1986, the original movie, starring Tom Cruise and Val Kilmer, was based on an California magazine article about Navy fighter pilots by Ehud Yonay, who died in 2012.

His widow, Shosh Yunay, and son Yuval Yonay, filed a notice in 2018 reclaiming the copyright to the story, which took effect in 2020.

They have argued in their lawsuit, which was filed in Los Angeles, that Paramount distributed Top Gun: Maverick without obtaining a new license to the material, according to Variety.

They’re seeking damages and an injunction that would bar Paramount from distributing the film.

Paramount said in a statement: ‘These claims are without merit, and we will defend ourselves vigorously.’

In the US, authors have the right to terminate transfers of copyright after 35 years.

Top Gun: Maverick started production in May 2018. It was originally due for release in 2019, before being delayed until 2020 and then for another two years due to the Covid-19 pandemic.

The lawsuit claims that the film was not completed until May 2021, more than a year after the termination notice took effect.

Top Gun is currently soaring at the box office, bringing in more than $500million (£398million) globally, according to Deadline.

Tom, who reprises his role as Pete ‘Maverick’ Mitchell took a fair bit of convincing to make a sequel to the wildly popular film.

Director Joseph Kosinski explained: ‘So I read the script, I had some ideas, and Jerry (Bruckheimer) liked those ideas. He said, “You know what, you gotta go pitch this to Tom directly”.’

The director flew to Paris to meet Tom on a movie set where he was shooting one of his Mission: Impossible films and was given a 30-minute window to convince the actor to return to Fightertown.

He had a challenge on his hands because he found Tom wasn’t impressed at first.

Kosinki added to Polygon: ‘We flew to Paris, where Tom was shooting Mission: Impossible, we got about a half hour of his time between setups.

‘And I basically had 30 minutes to pitch this film, which I didn’t realise when we were flying over. But when I got there, I found that Tom really didn’t want to make another Top Gun.

‘It’s one of those moments as a director, you have one on every film, where you’re on the spot to make a case for why this movie should be made. I had 30 minutes to do it.’

The pitch was successful and by the end of the meeting, Cruise had told movie bosses he was happy to return. So much so, he ‘picked up the phone, he called the head of Paramount Pictures and said, “We’re making another Top Gun.”‘