⚠️ Read our coronavirus live blog for the latest news and updates 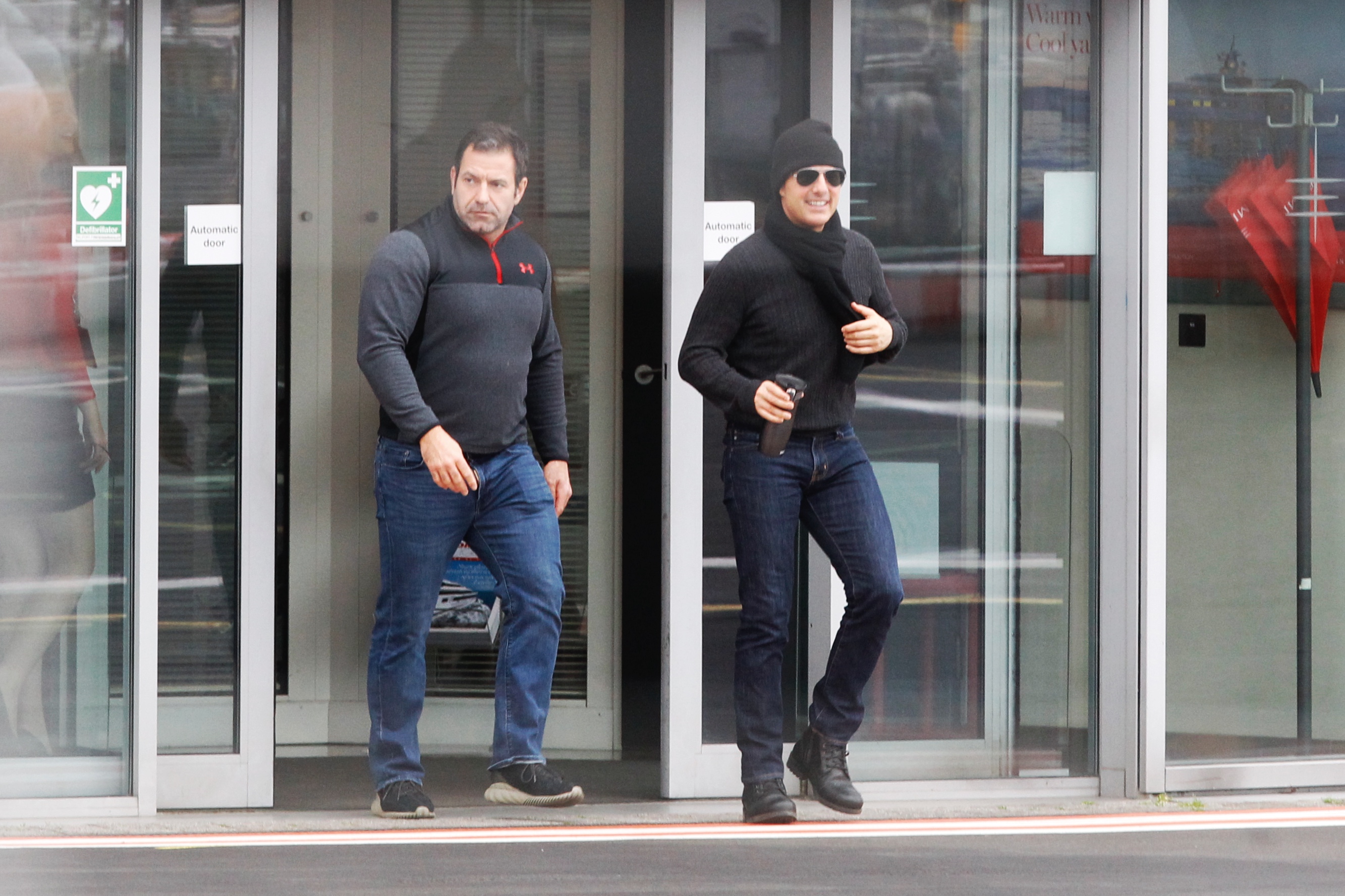 Tom, 57, has reprised the role of Ethan Hunt was in England to shoot the action packed opening sequence.
He was spotted performing dangerous stunts on motorbikes and cars along a runway.
Film crew watched on as Tom performed death defying burnouts in an original Fiat 500.
The orange mini car was engulfed in smoke at the Oscar nominated actor impressively manoeuvred it around the runway. 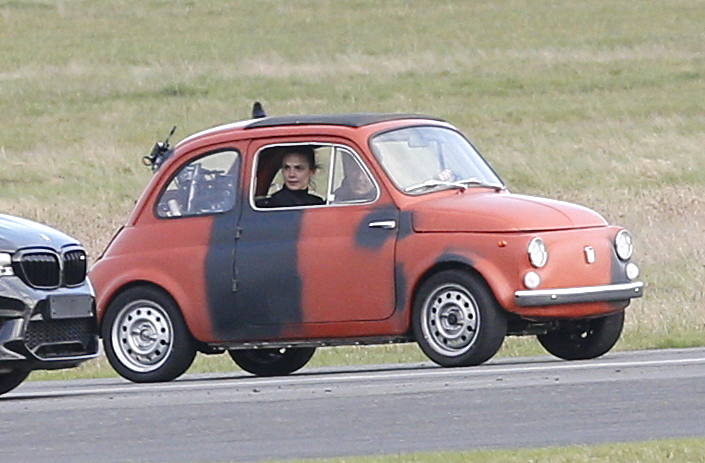 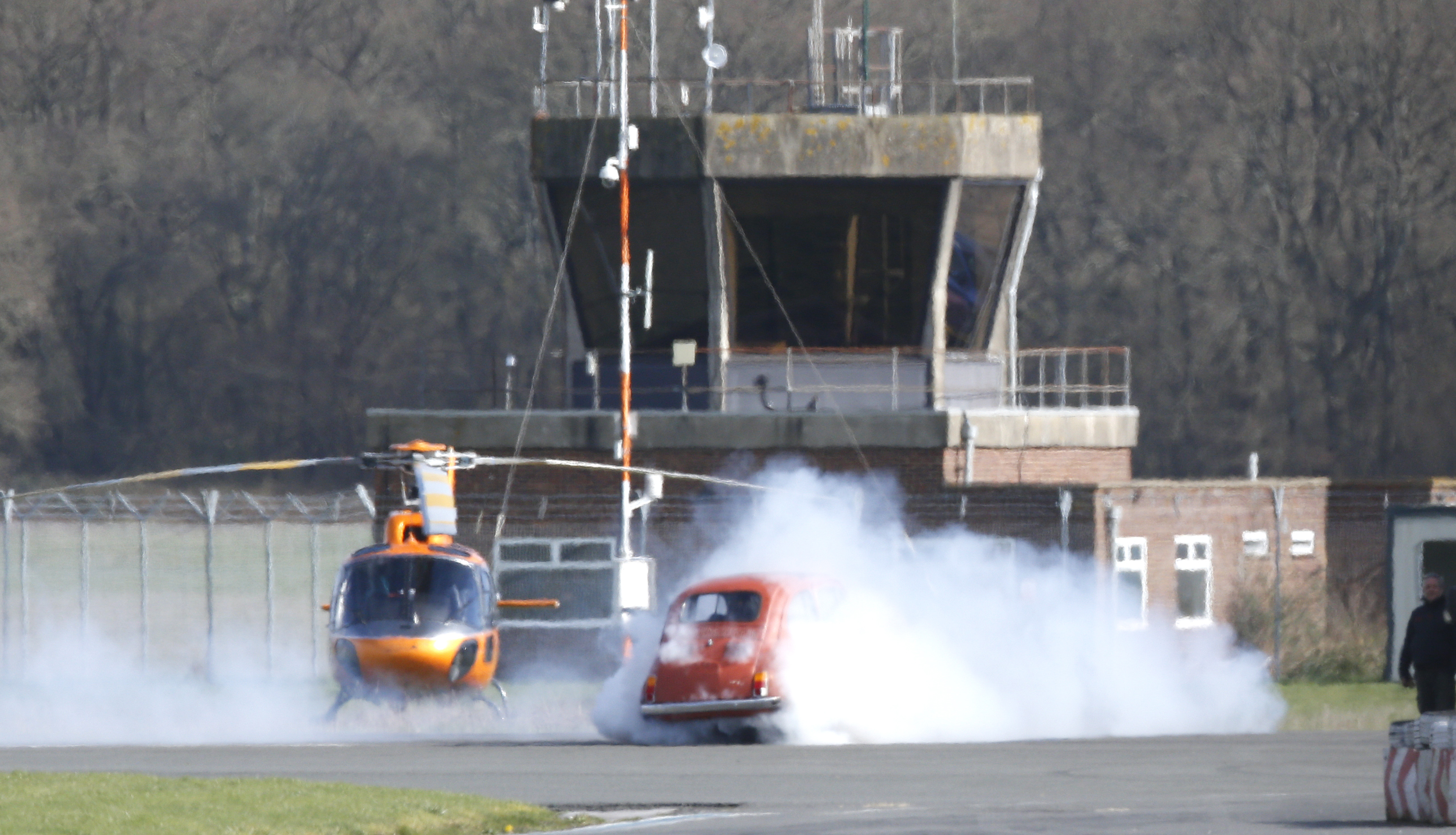 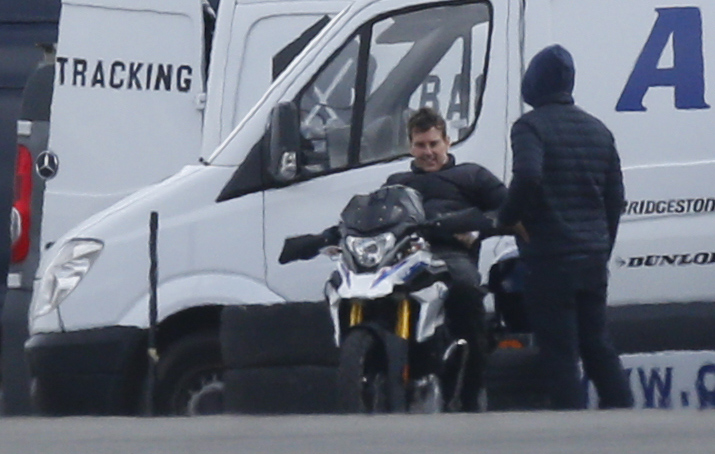 A bit later, the Fiat 500 was used in a dramatic chase scene with a helicopter as it got very close to the ground near the vintage car.
The dad-of-three was also a whizz on a fast motorbike riding on the back wheel in front of military style aircraft.
Tom seemed to be in a pretty good mood, smiling in between takes.
He wore a black beanie and puffer jacket to keep warm, but took the beanie off while cameras were rolling.

A black BMW with its doors off was driven by cruise with glamorous leading lady Rebecca Ferguson as Ilsa Faust in the passenger seat.
Cameras hitched to the top of the car filmed the two actors as Tom dazzled Rebecca with his impressive stunt driving skills.
Filmmakers built a huge Italian set in Surrey to allow filming for the massive franchise to go ahead.
The mammoth replica at Longcross Studios in Surrey will include iconic Italian landmarks such as, the Spanish Steps in Rome, which are 136 steps dominated by the Trinita dei Monti church at the top. 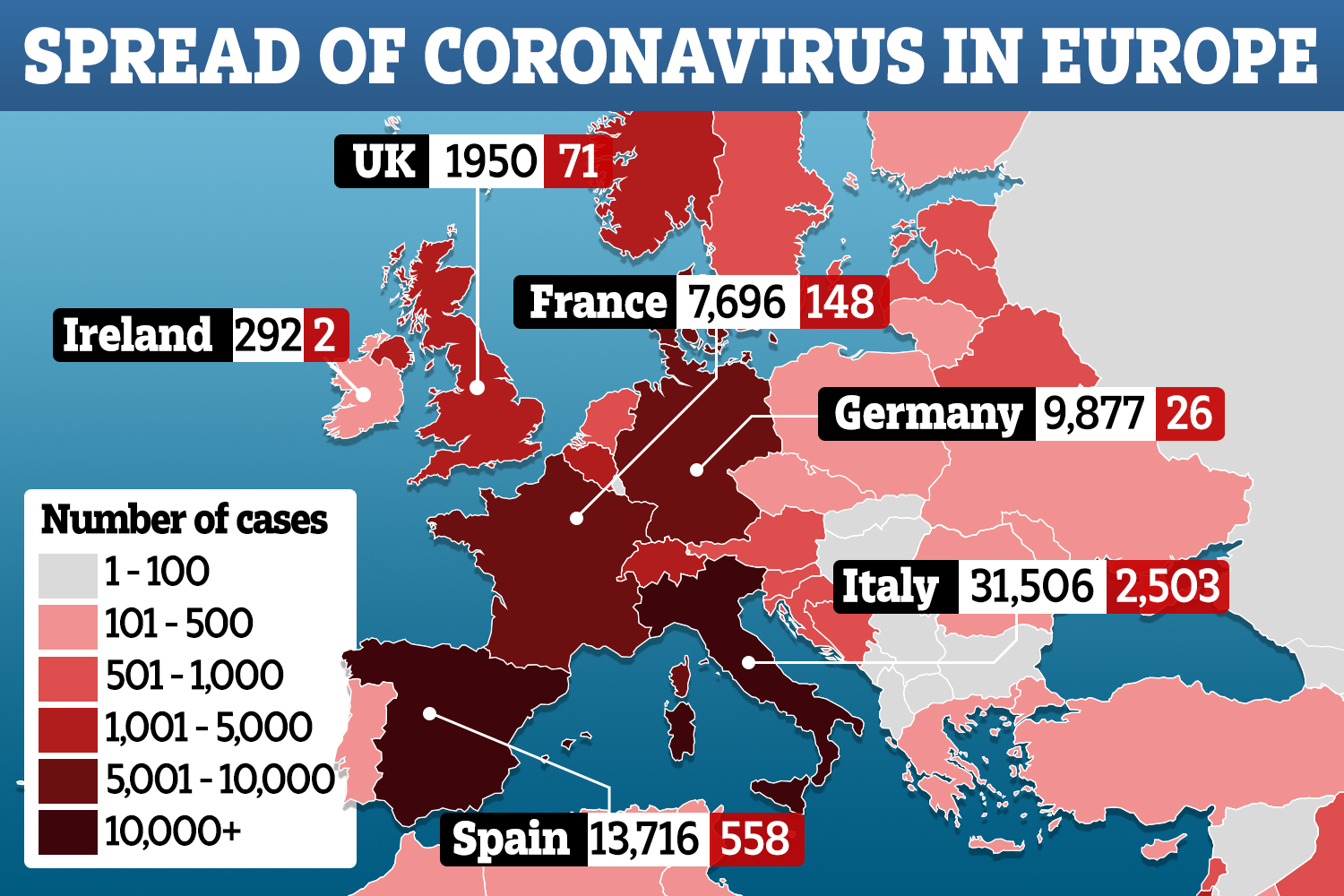 Co-star Simon Pegg, 50, described how the cast and crew of the blockbuster were dramatically evacuated from Venice.
"Paramount were very cautious and sensible I think and pulled the production out of Venice. It’s a big group of people, we were shooting carnival sequences and it was just unwise to remain so we bugged out."
The Lombardy region where Venice is became ground zero of the major coronavirus outbreak in Italy.
After China the country remains one of the most impacted by the deadly virus. 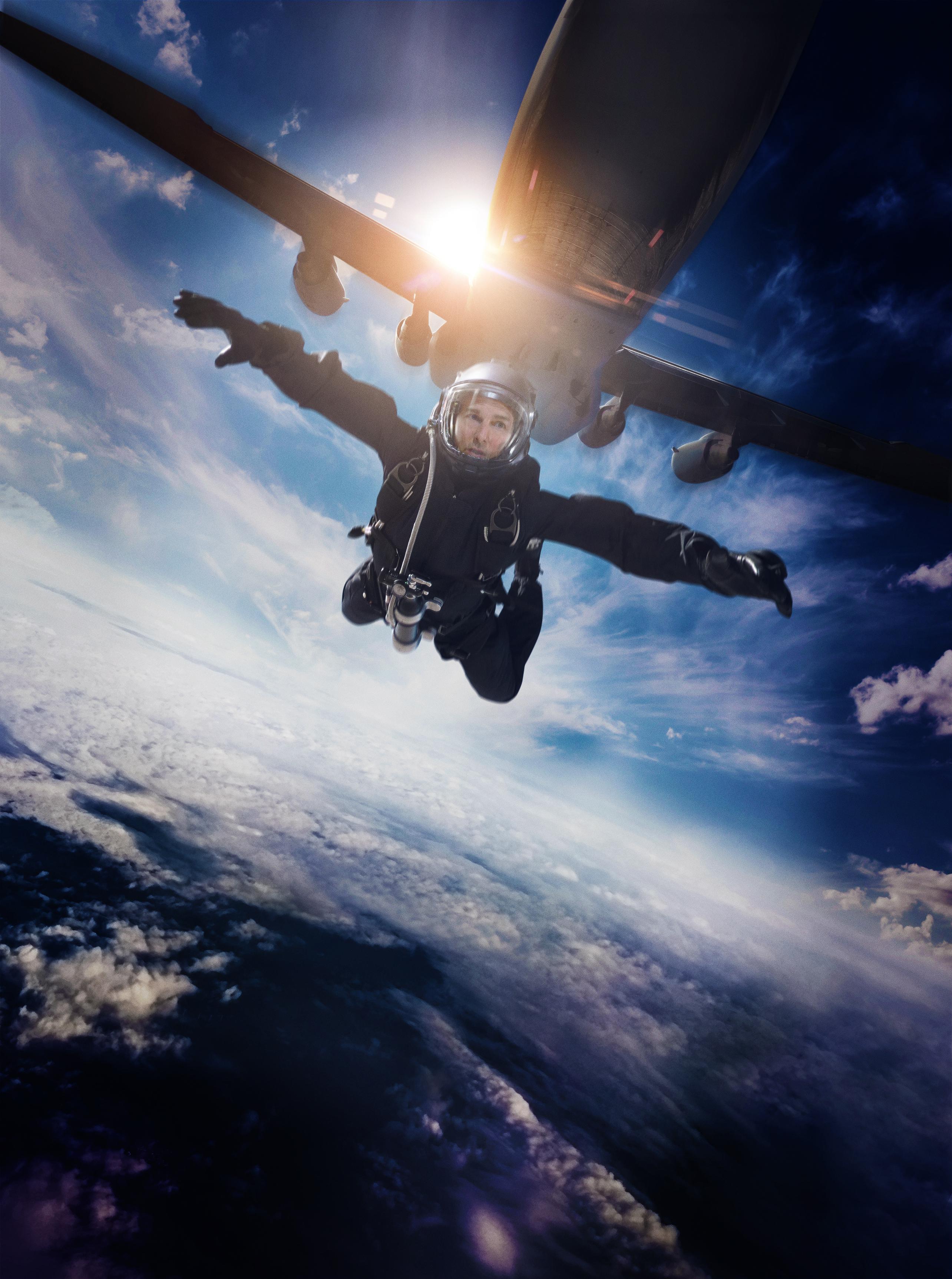 [boxout headline="CORONAVIRUS CRISIS – BE IN THE KNOW" intro="Get the latest coronavirus news, facts and figures from around the world – plus essential advice for you and your family."]

To receive our Covid-19 newsletter in your inbox every tea time, sign up here.

Authorities decided to put the country into lockdown to try to stem the number of new infections and have prevented people from gathering in large groups, closing schools and requiring all arrivals to Italy to self-isolate for 72 hours.
Italy currently has reported 26,062 cases of coronavirus and 2,503 deaths.
Christopher McQuarrie will direct the movie after previously helming previous instalments Rogue Nation and Fallout, with a scheduled release date of July 23 next year.

A statement from studio Paramount at the time confirmed: “Out of an abundance of caution for the safety and well-being of our cast and crew, and efforts of the local Venetian government to halt public gatherings in response to the threat of coronavirus, we are altering the production plan for our three week shoot in Venice, the scheduled first leg of an extensive production for ‘Mission: Impossible 7’. 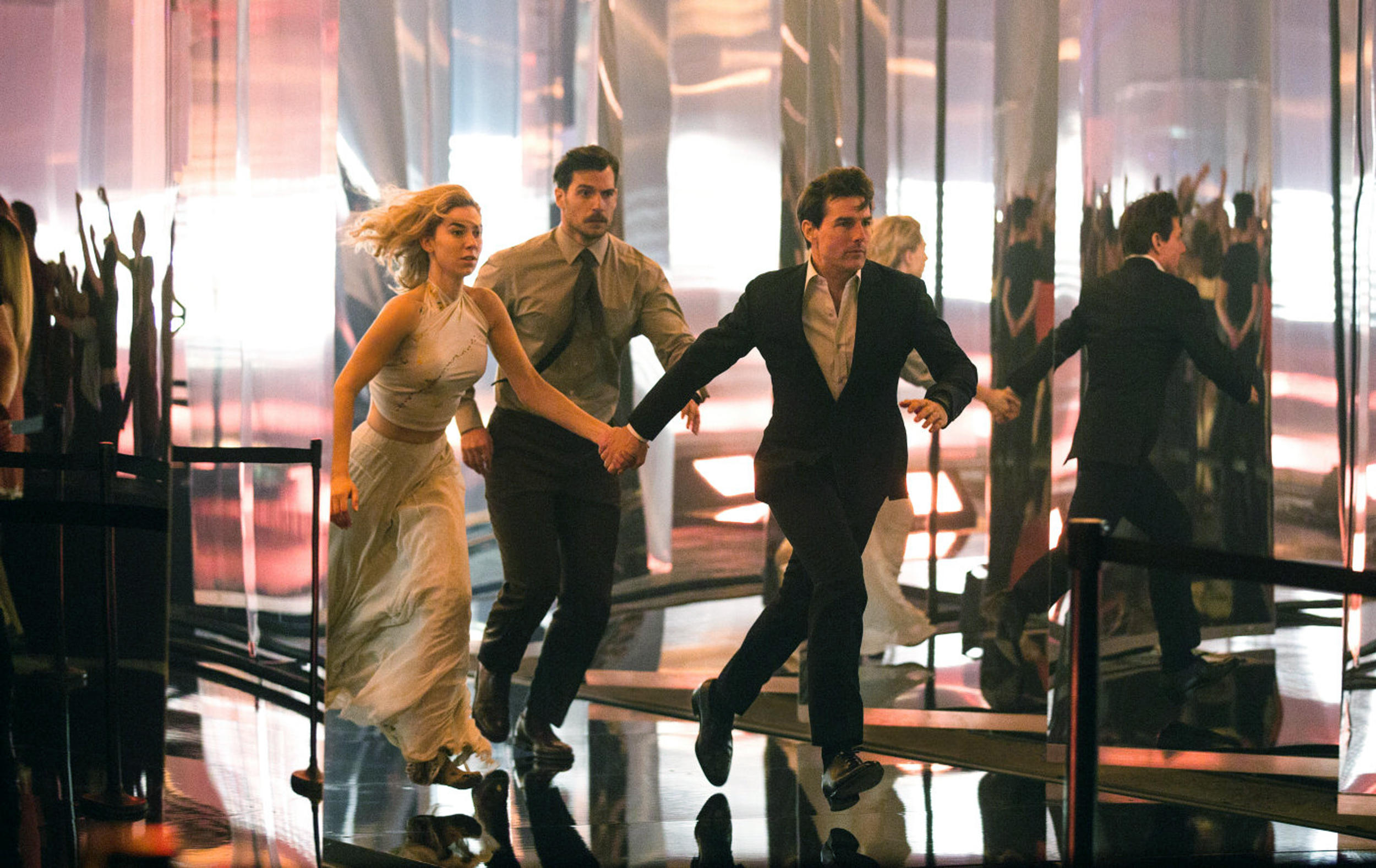 “During this hiatus we want to be mindful of the concerns of the crew and are allowing them to return home until production starts. We will continue to monitor this situation, and work alongside health and government officials as it evolves.”

Tom Cruise first played Ethan Hunt in 1996 and has since starred in six of the films in the franchise.

He will also headline Mission: Impossible 8 which will be released in 2023.