This Morning viewers were left horrified after a segment showing a dog which had been dyed green to look like The Grinch.

Holly Willoughby and Phillip Schofield spoke to groomer Gabriel Feitosa, who has gone viral for transforming a white Bichon Frise into the green festive character.

He told the hosts: ‘Actually I was surprised at the reaction. The Grinch look – a lot of people were very happy and I got a lot of calls of people wanting to bring their dog by from New York, everywhere, to make their dog a Grinch.

‘I also got a lot of people that were concerned about what kind of dye we were using, what happens, should we do that to a dog, but overall it was very positive.’

While many were worried the treatment could harm the dog, Gabriel reassured them: ‘Well, Charlie is very happy, right Charlie? Everything is vegan, non-toxic and developed for animals.

‘That’s what people don’t understand, is that the cosmetic for the grooming industry is now very advanced – we have whitening shampoos, we have deep conditioners and hair dye for dogs, semi-permanent and permanent dyes. 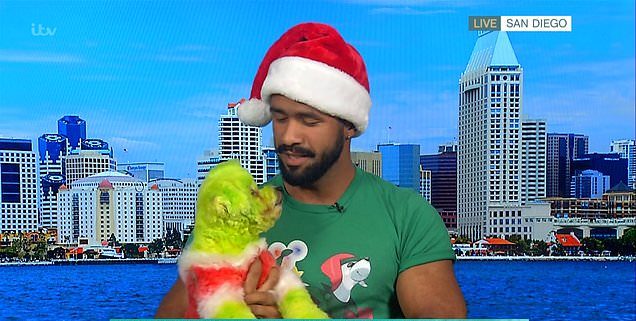 ‘Everything is vegan and non-toxic – there’s a video on my TikTok where I eat the dye to show people that it’s ok. Even some of the ingredients are food approved.’

Despite his reassurance that the dye could not harm the animals, viewers of This Morning were still not impressed.

Its am animal not a toy! Dye yourself and leave the dog alone!#ThisMorning

That poor dog. State of it #ThisMorning

What has he done with that poor dog!#ThisMorning

How long before it grows out? #ThisMorning

âThereâll be positive reactions to thisâ¦.â They love mollycoddling the guests who are blatantly in the wrong #thismorning

#ThisMorning
(Q)…Who gains out of the dogs looking like this..
(1) The Dog..
(2).The Human…ð°ð°
Always the human..
I’d rather have my dog ð looking like a dog not looking like some cartoon character. ð 

All those dogs look miserable, it may not be hurting them but that doesn’t mean it’s not abusive. Dogs are NOT toys. Shame on you @thismorning for promoting this. #ThisMorning

Itâs a dog not a colouring book #ThisMorning

They tweeted: ‘Its an animal not a toy! Dye yourself and leave the dog alone!’ and ‘That poor dog. State of it.’

Others added: ‘What has he done with that poor dog,’ ‘How long before it grows out?’ and ‘Why doesn’t he do his beard like that instead of the poor dog.’

Another pointed out: ‘All those dogs look miserable, it may not be hurting them but that doesn’t mean it’s not abusive. Dogs are NOT toys. Shame on you @thismorning for promoting this.’

This Morning airs weekdays from 10am on ITV.