Derryn Hinch, involuntarily retired senator, returned to television as a journalist on Thursday night – and on the face of it this was a good thing for Sky News.

“As I was saying before I was rudely interrupted…,” Hinch joked on the relaunch of his TV career, summoning a history in the Australian news media that has few if any comparisons, for better and worse.

Behold. Amid the shouty festival of carnival barkers, loitering bigots with nowhere else to go and party hacks masquerading as current affairs hosts on Sky After Dark – SAD, for those who like to keep it brief or turned off all together – here was an actual journalist. 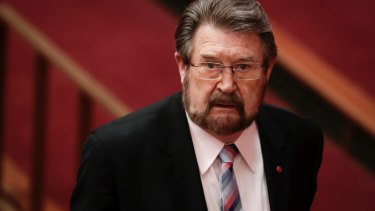 Derryn Hinch has returned to broadcasting after his stint as an Australian senator.Credit:Alex Ellinghausen

For whatever you may say about him, Hinch is an actual journalist. He’s been at it since the 1960s, and if you want to contest a CV that includes the assassination of Robert Kennedy, the moon landing, Watergate and much else since, go right ahead. You’ll lose.

There is the other Hinch, too. The Human Headline Hinch, whose Twitter handle embraces the name and the reputation.

Both Hinchs were on display on Thursday night, as well as a third one – the freshly rejected senator who is in the position of being mates with everyone who shares his stage.

He said early on: “This could be a very bumpy ride.”

Well, no. Not very bumpy if everyone’s a buddy.

On his debut outing, there was Centre Alliance senator Stirling Griff, talking the day’s events. He would have been fodder for the old Hinch. Now he was a former colleague. They yucked it up, chuckling about the senate crossbench of the previous parliament.

Hinch: “[We] were regarded as the bar scene from Star Wars.”

They pondered the power of Jacqui – this was a first-names only show, where one was to assume they meant the returning Tasmanian senate swing vote Jacqui Lambie. Lambie herself was not present – Hinch said she had agreed to appear, but backed out on Thursday morning.

But there were no hard feelings. It was all very nice.

Next up: Labor’s Joel Fitzgibbon, on live sheep exports, and Hinch’s declaration that he had first presented a petition on the issue back in 1982.

He has certainly been around a long time. In 1982, he was the king of Melbourne talkback radio – foil of politicians on both sides, and the man who famously belted all-conquering Bert Newton off the top of the radio charts.

Then, as now, Hinch was a conundrum – part show-pony, part amateur politician, part conviction journalist, part celebrity. It’s always been possible to violently agree with him and violently disagree with him in the same 15-minute span.

On Thursday night, for example: you could take his side on the question of the plastic bag.

Then came a live plug with Sky colleague Paul Murray.

“Son, good to see you,” said Hinch to the least watchable broadcaster on Australian television.

Murray comes to our screens looking like an old tracksuit found washed up in a whale, and bellows at his tiny viewership like the whale choking to death on the tracksuit. But there was much bonhomie – and it was a reminder that this was, after all, Sky After Dark.

To close, Hinch recited a bag of the emails Sky had received about his return to the airwaves, such as: “This tired, old, mouldy crumpet.”

He ain’t that. Unlike Murray, he is a great broadcaster. And he has the potential to break up the Sky evening parade of shouty stupid if he sticks to his older rather than more recent instincts.

The last thing Australia has come to expect from the man is that he will be mates with everyone, especially the members of our federal parliament and the loopy-loos of the SAD hours.

He signed off with his trademark: “That’s life.”

It wasn’t quite, but it has potential.