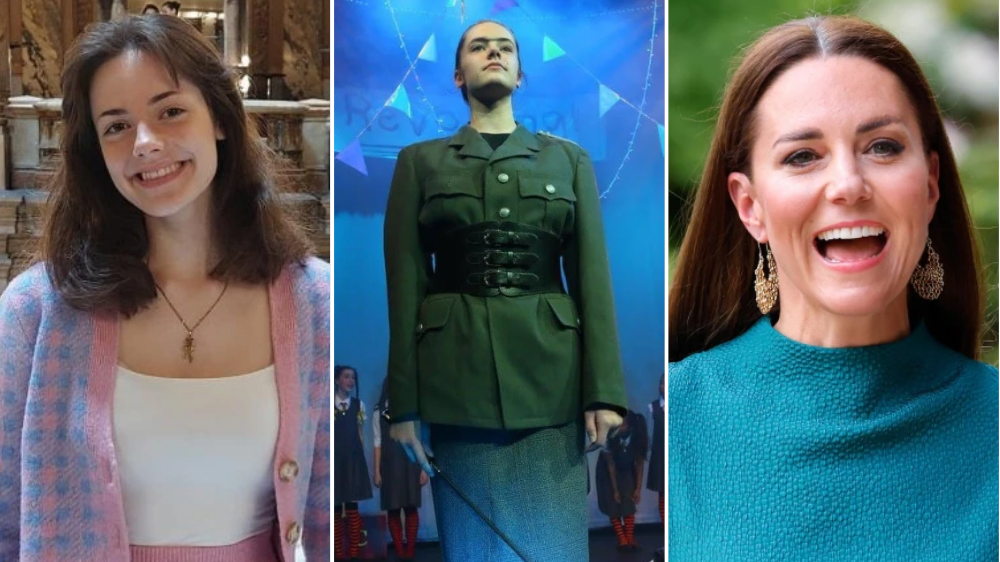 The Crown star Meg Bellamy, who will star as Kate Middleton in season 6, once played a much less glamourous role – as Miss Trunchbull in Matilda.

The 19-year-old is about to play the Princess of Wales in the final season of The Crown, the first time Prince William’s now wife has appeared in the controversial Netflix series.

But a photo taken from her teenage performance in the stage version of the Roald Dhal classic, Bellamy is quite the force to be reckoned with decked out in a military uniform, ill-fitting pencil skirt, prominent monobrow and the Matilda villain’s signature riding crop used to whip the bane of her existence – all children everywhere.

Hopefully, she’ll be less intimidating as our Kath.

Thankfully, according to her former teacher, she is much more Ms Honey.

Speaking to the Mirror, her former teacher Claire actually said she was very similar to Middleton and ‘ridiculously humble’.

‘She was very popular the type of student you had to encourage to come forward,’ she said.

She continued:  ‘What’s amazing is that she took the initiative to do a self tape for The Crown and it’s become one of the stories you rarely hear of in the industry – a huge unknown plucked for a massive production.

Bellamy will star opposite Ed McVey who will be playing her now doting husband Prince William when season six follows the couple’s early years together when they met at St Andrews University.

The Crown is Bellamy’s first major production, and confirming her addition to the cast this year she wrote on Instagram: ‘Pinch me please… So excited to announce that I will be playing Kate Middleton in Series 6 of Netflix’s ‘The Crown’.

‘It is such an honour to be joining the most incredible cast and crew, and I will strive to do Kate justice.’

Bellamy is expected to start filming season six of The Crown later this year.

Imelda Staunton will continue to play Queen Elizabeth II after her debut as the late monarch airs in November.

A recent trailer for The Crown season 5 teased all out war between Charles and Diana following their split and subsequent bombshell interviews.