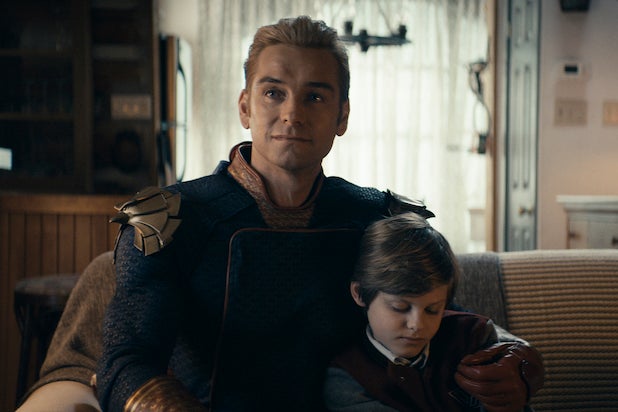 The second season of Amazon Prime Video’s “The Boys” came to a bloody conclusion Oct. 9 and already fans are trying to figure out everything they can about Season 3. And while all you weekly-rollout haters are rethinking your position now that the new episodes have dried up, TheWrap has been rounding up all the details of the third season of Eric Kripke’s raunchy superhero series that we currently have.

See our list below and check back for updates as more info on “The Boys” Season 3 becomes available.

1. When will it begin filming?

“The Boys” showrunner Eric Kripke told TheWrap last week that he and the team are “actually through a lot of the writing” on Season 3 and the hope is to begin shooting in early 2021. Then on Wednesday, Kripke tweeted out the cover of Episode 301, which is called “Payback” and re-confirmed his earlier early 2021 prediction.

2. When will it premiere?

We don’t have an answer for this one yet. But for what it’s worth, season one premiered in July, 2019 and 2020’s Season 2 premiered in September, so your guess is as good as ours.

3. Are there any newcomers joining?

Yes! Kripke is re-teaming with “Supernatural” star Jensen Ackles, who will be heading over to “The Boys” — once the 15th and final season of The CW drama comes to an end — to play Soldier Boy in Season 3. Per Amazon, Soldier Boy is known as “the original superhero,” who fought in World War II and became “the first super celebrity, and a mainstay of American culture for decades.”

Soldier Boy was a member of the team Payback in “The Boys” comics, created by writer Garth Ennis and artist Darick Robertson, and Kripke told Entertainment Weekly, Season 3 will explore “the history of that team and all the members in it.”

4. Will Aya Cash’s Stormfront be back?

“She’s not dead. She’s ‘Stumpfront’ now,” Kripke told TheWrap when we asked him this question after the Nazi supe got burned to a not-quite-dead crisp by Ryan (Cameron Crovetti) in the Season 2 finale. “You know, no comment about whether she comes back, but she is forever going to be this kind of mutilated, stubby little Nazi, which we thought was the right punishment for somebody who so believed in Aryan purity. And remember, she ages very slow to age, so she’s got a long time to be living in this messed up state. So I think she richly deserves that.”

5. What do we know about the plot?

Well, Butcher (Karl Urban) is going to be grieving the death of Becca (Shantel VanSanten) — which happened by accident, as the result of Ryan actually trying to save his mother from Stormfront — that’s for sure.

“Without talking too much about Season 3, emotionally, the Butcher that we see at the end of this season continues but with a vengeance,” Kripke told TheWrap. “He’s at war with himself. There’s a part of him that’s represented by Becca and Hughie (Jack Quaid) and Ryan, there’s like a part of them that just has a humanity. It’s a small part, but it’s a part. And the other part of him is his father, and violence and rage and unprocessed anger. And those two sides of him are really at war in Season 3, because he’s furious. And yet he can’t really be furious at the kid. And so he’s furious at Homelander. So he’s a mess. And those two sides really struggle in season three.”

Meanwhile, Hughie is off trying to fight Vought in a safer way by working for the task force headed up by congresswoman Victoria Neuman (Claudia Doumit) — who just so happens to be a supe herself and the one responsible for killing all of those people at the Vought congressional hearings.

“Hughie sort of inadvertently is heading into the lion’s den,” Kripke said. “You know, he has this kind of sword hanging over his head as he goes to work at the Federal Bureau of Superhuman Affairs, the FBSA. And, you know, the whole time there’s this tension of who she really is. And sooner or later, he’s gonna discover it, obviously, and we’ll really unpack who she is and why she’s doing what she’s doing. And I think there’s surprises ahead on that.”

No word on this either, but the switch from Season 1’s all-at-once release to the blended binge/weekly model paid off hugely with an 89% rise in worldwide viewership in Season 2. Not only that, but fellow Amazon Prime series “The Expanse” will be copying that model for its upcoming 5th season.

Our guess: Expect a weekly rollout for Season 3.

7. What’s going on with the spinoff?

Ahead of “The Boys” Season 2 finale, Amazon fast-tracked development an untitled spinoff series set at a superhero college run by Vought. Kripke told TheWrap the show, which has not been ordered by the streaming service yet, is “loosely inspired” by the comics’ G-Men, a blatant parody of Marvel’s “X-Men” characters.

The spinoff series will be executive produced by Kripke, Seth Rogen and Evan Goldberg, who developed “The Boys” for Amazon, as well as Craig Rosenberg, who is writing the pilot.