The pair debated the ongoing row over MPs pay, which has faced further scrutiny following the announcement Boris Johnson has cut Universal Credit for millions.

The 50-year-old presenter is thought to earn approximately £750,000 a year for her role on GMB, according to CelebWorth.net, and was put on the spot by Portillo when her own pay came into question during a discussion over Sir Peter Bottomley’s struggle to make ends meet on a £82,000 a year salary.

She commented: ‘On the day Universal Credit is cut for thousands of people across the country, Sir Peter Bottomley says MPs who are paid £82,000 a year should be the same as GPs whose average salary is £100,700.’

Cutting in, Portillo, 68, asked: ‘Or TV presenters? What about that?

‘What if they were paid the same as TV presenters? Would that be a good one?’ 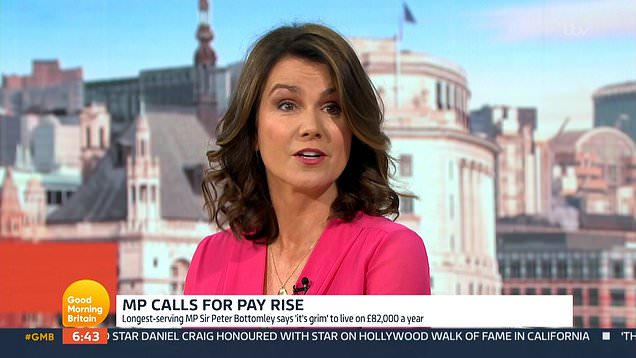 Defending the pay of a TV presenter, Susanna replied: ‘Well, the difference is, of course, that TV presenters aren’t paid out of the public purse on this channel. So, I’m not sure the comparison applies.’

‘But are you saying then that because people work in the public sector there can be no market consideration?’ Portillo questioned.

Susanna agreed if Sir Peter Bottomley is struggling on an annual salary of £82,000 – more than 2.5 times the average UK salary – then he has the right to express that.

However, Portillo noted that MPs are paid the same whatever their age and experience.

He said: ‘So if you went into the House of Commons at 26 and £82,000 then you think this is fantastic because you were stacking shelves the week before or whatever.

‘But when you’re over 70 with all those years of seniority.’

He added: ‘But if you were in the private sector he’d have been making a lot more.’

Back in 2019, Susanna’s former Good Morning Britain co-star Piers Morgan encouraged her to admit she’s a millionaire live on the show.

She politely declined, however, during the discussion about celebrated wealth.