Academy president David Rubin and Oscar show producer Will Packer clearly enjoyed escaping from the anxieties of this year’s Oscars for one relaxed evening, as this year’s postponed Governors Awards finally unfolded the Friday before the big night Sunday, in a low-key alternative Oscar universe. These awards used to be presented at the main Oscars, but were cut back in 2009 after it took a full 45 minutes to give them out. Now the Academy Awards ceremony displays a montage of the Governors Awards presentation.

Usually the Governors Awards, voted on by the 53-member Board representing 17 branches, take place in November and function as a black-tie starting gun to Oscar season, while providing the Academy with a revenue-generating event, as studios buy tables and pack them with that year’s Oscar-bound talent. That energy was missing from the subdued proceedings tonight, as Denzel Washington was the only star nominee to turn up this year — to present to his old friend, honoree Samuel L. Jackson. The other nominees are either saving their energy for Sunday (or in the case of Kenneth Branagh, Ciarán Hinds, and producers Phil Lord and Chris Miller, recovering from catching Covid at the BAFTAs) or celebrating at the annual Women in Film gala, which drew “The Power of the Dog” director Jane Campion and her producer Tanya Seghatchian, “Coming to America 2” makeup nominees, perennial song nominee Diane Warren, and veteran “West Side Story” Oscar-winner Rita Moreno.

This year, Elaine May made the trek to the Governors Awards, even if her “Ishtar” and “Reds” pal Warren Beatty talked her into showing up and “never called again,” she said. The first Governors Award of the night was delightful, as May’s shaggy-dog companion Bill Murray dumped the intro speech he shared with her in the taxi ride on the way over. “We laughed and laughed, but it was a really good speech,”  she said. “They told me Zelensky would do the intro. Thank God I got Bill instead.” 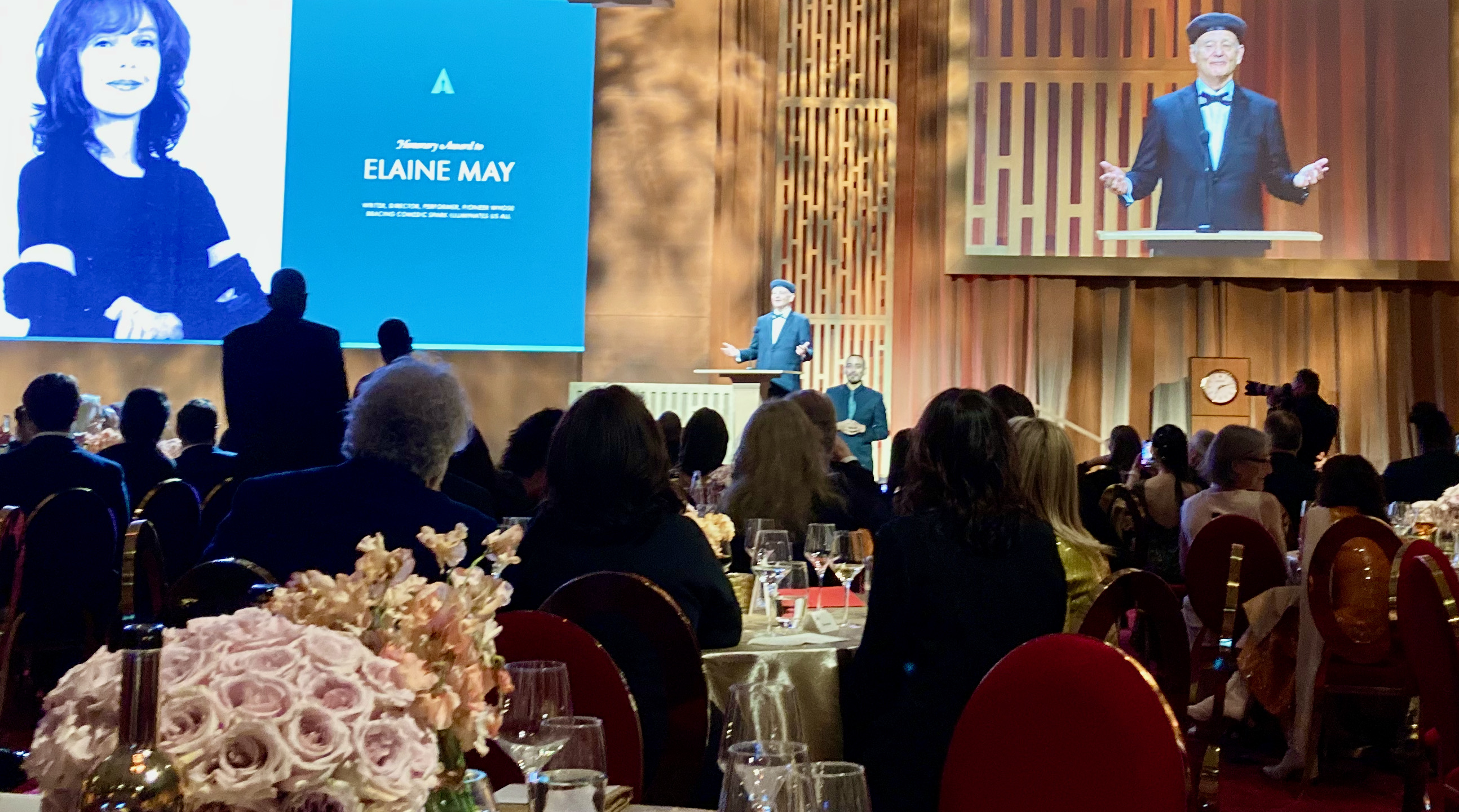 Bill Murray honors Elaine May at the Governors Awards.

Murray did describe his old friend as “one of the greatest minds ever to work in these United States,” he said, “She’s probably one of the most attractive and intelligent women I’ve ever worked with, who saved my life on multiple occasions.” She saved others too, giving crucial rewrites to Beatty on “Reds,” among others. Her clip reel ranged from her early improv skills with partner Mike Nichols to her studio writing and directing career with “The Heartbreak Kid,” “Heaven Can Wait,” “Mikey and Nicky,” and the notoriously big-budget bomb “Ishtar.” May was one of the rare women in her era to work in the studio system. “If all of the people who hate ‘Ishtar’ had seen it,” May once said to Nichols, “I would be a rich woman today.”

Introducing Samuel L. Jackson was “The Tragedy of Macbeth” nominee Washington, who is producing August Wilson’s “The Piano Lesson” (Netflix) starring his old pal and directed by his wife LaTanya. “We’ve come a long way,” Jackson said to Washington, and went on to remind the audience that he grew up in Chattanooga, Tennessee, going to see his movie idols Errol Flynn and John Wayne in segregated movie houses. He started making movies in 1972, 50 years ago.

When he won Supporting Actor at Cannes for playing a strung out addict in Spike Lee’s “Jungle Fever” (they made eight films together, including “School Daze” and “Do the Right Thing”), Hollywood called. Jackson was sitting with frequent collaborator Quentin Tarantino (“Pulp Fiction,” “Django Unchained,” “The Hateful Eight”). Jackson’s goal was to entertain people the way he had been entertained growing up as a kid, he said. His clip reel showed why he’s one of the highest-grossing actors of all time, with credits from multiple Marvel appearances as Nick Fury to playing a Jedi in three “Star Wars” movies, not to mention “Die Hard With a Vengeance.” Perhaps his most memorable movie line: “I’ve had it with these motherfucking snakes on this motherfucking plane!” 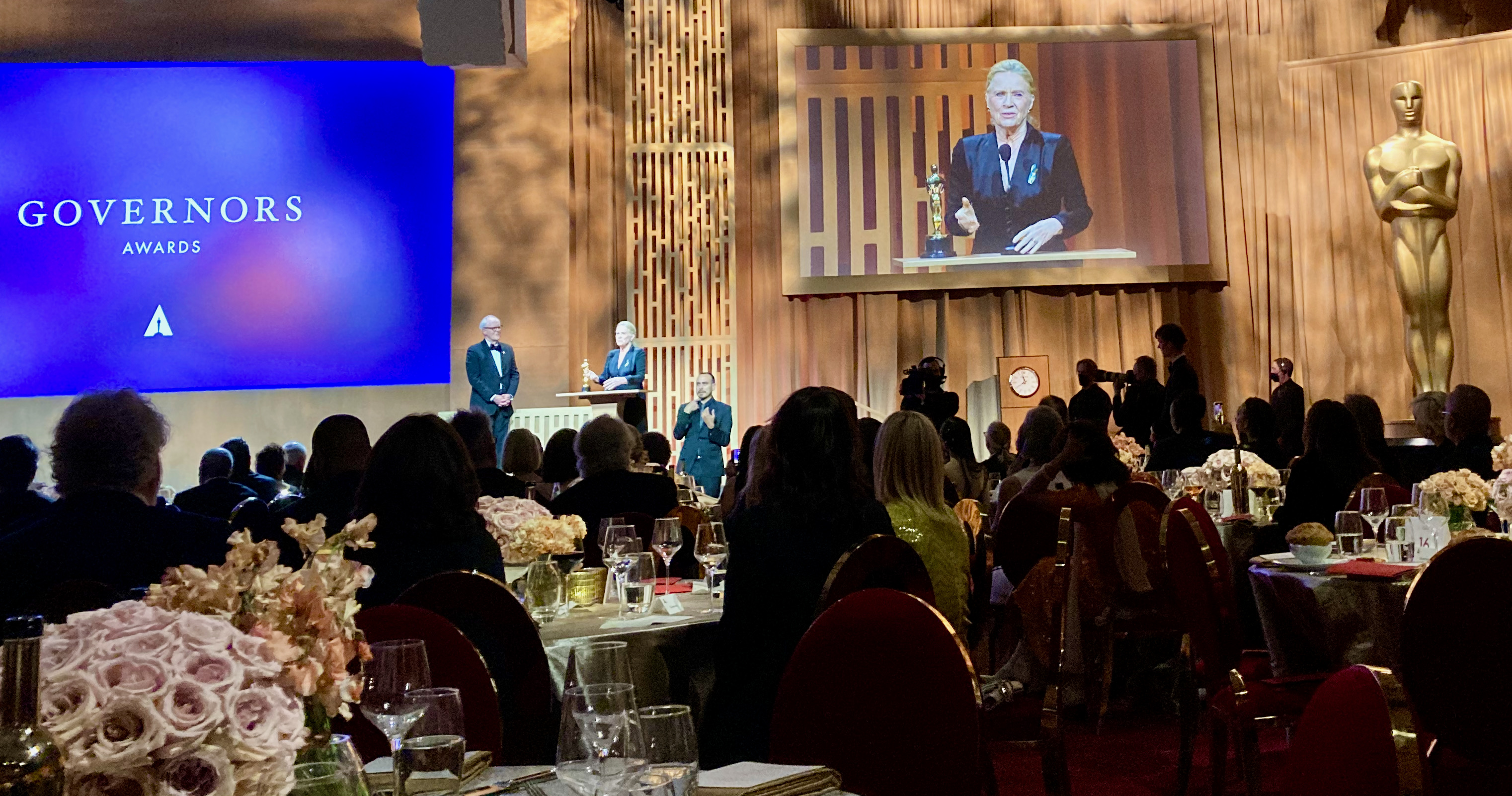 Liv Ullmann accepts her honorary Oscar at the 2022 Governors Awards.

John Lithgow introduced his “Anna Christie” costar Liv Ullman, who, when she was starring in the title role on Broadway, said she spotted Greta Garbo on the street and tried to approach her, running after her when she ran away, escaping into Central Park. Once renowned as a Norwegian theater actress who became Swedish filmmaker Ingmar Bergman’s muse (starring in “Persona” and “Scenes from a Marriage”), Ullman took on film directing as well as channeling her energy toward helping others, which saved her, she said, from thinking too much about herself.

Alfre Woodard presented the Jean Hersholt Humanitarian award to Danny Glover (“Lethal Weapon,” “The Color Purple”), who talked about how he grew up in the Bay area, inspired by his mother, the first person in his family to go to college, and was urged to get into acting by activists at San Francisco State. The actor has always pursued workers’ rights as well as expressing his political beliefs in his movies. Glover has backed any number of movements as well as the recent 1619 Project. “At this particular moment in time,” he said, “we can remember our past.”

These awards, said Academy President Rubin, “represent a generosity of spirit that’s not always in the Hollywood spotlight.”