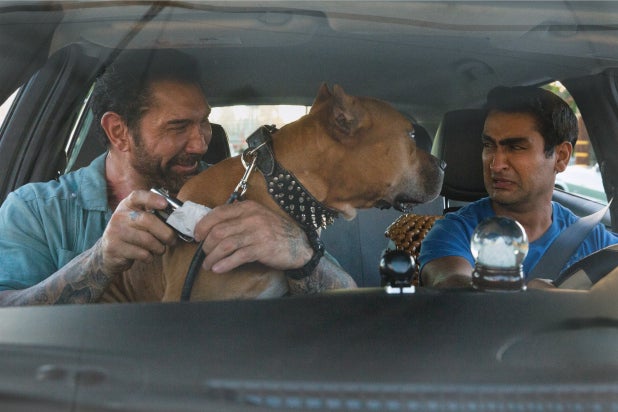 With a title that’s almost as lazy as its script, “Stuber” is a lackadaisical attempt at a “woke” buddy-cop comedy that just can’t figure out how to fuse together its story with the message it is trying to promote.

Stu (Kumail Nanjiani) is a part-time Uber driver — get it? Stu + Uber? — and employee at a sporting goods store where his boss takes constant verbal, at times racist, shots at him. His only bright spots are small, in-between moments where his friend and future business partner Becca (Betty Gilpin) leans on him for comfort whenever she breaks up with whatever meathead boyfriend she has at the moment.

Just when it feels like he might finally be able to connect with Becca and tell her how he really feels, Stu picks up passenger Vic (Dave Bautista), an angry cop who is recovering from Lasik surgery but refuses to let his blurred vision stop him from solving his former partner’s murder. He bullies Stu into driving him all over Los Angeles, hitting up male strip clubs, veterinary hospitals, and other random locations to chase the drug dealer (Iko Uwais, “The Raid”) he suspects is not only his partner’s killer but also the kingpin behind a drug that is filling the streets of L.A.

Watch Video: Dave Bautista and Kumail Nanjiani Have the Uber Ride of Their Lives in 'Stuber' Trailer (Video)

Though the story tries to take on toxic masculinity throughout the film, Tripper Clancy’s script frequently loses focus and concentrates too much on lazy jokes, rendering the message very muddled and ultimately confused. Only towards the final few minutes of the film does that message become clear, and only because it was spoken out loud by the two lead characters. And though “Stuber” does facetiously try to point out the failings of toxic masculinity, the jokes at times rely on homophobic quips which demean the intent entirely.

The women are secondary, so thinly conceived that you almost wonder why they are even there. The principal female characters — Natalie Morales as Vic’s artist daughter, and Gilpin’s kooky small business owner — might have small arcs of their own, but instead of joining the men to form one cohesive plot, they exist in their own sideline narratives, never given their own chance to shine or to be part of the main story.

It’s telling that the lines that actually land were improvised by the actors and not written by Clancy, and had director Michael Dowse (“Goon”) given those scenes and comedic arcs more focus, perhaps “Stuber” would have been naturally funnier. It’s a shame to waste comedic talents like Nanjiani and Bautista, two very different performers who have nonetheless proven their comedic and dramatic abilities in better films. Aside from not giving Gilpin or Morales more moments to shine, and some rather questionable choices in edits, that is perhaps Dowse’s most flagrant error.

The production design outshines the film in several measures. It integrates technology like Facetime and Uber to create an essential sense of “now” that the film needs to exist. And as a native Angeleno, I completely believed that the landscape was that of Los Angeles and not Atlanta, where it was actually filmed. The film manages to capture that very L.A.-like quality of a diverse, large community that’s spread out and on the move but is woven together by apps, iPhones, and yes, rideshare services.