This evening the Star wars franchise revealed major new merchandise for upcoming Star Wars movie Rise of Skywalker, as well as the series The Mandalorian and the latest game from EA and Respawn – Star Wars Jedi: Fallen Order. Toys and models were unveiled, as well as chats with some of the stars. The biggest shock was the long-awaited confirmation of a truly tantalising C-3PO leak. Mark Hamill denied it was true back in April but we finally have proof.

First a celebratory set of golden C-3PO, R2-D2 and BB8 models was shown to a visibly moved Anthony Daniels and Jonas Suotamo. But the best was still to come.

The host pulled out the Hasbro Black Series C-3PO and gave fans what they have been waiting for all along.

Yes, finally we have confirmation that Threepio will indeed pick up a weapon and it will be a Wookiee bowcaster.

A leaked poster in the Spring showed the droid in warrior mode but it was quickly denied. Now the proof is officially out there. The pictures below confirm what the droid is holding. It is also by his feet in the second image. 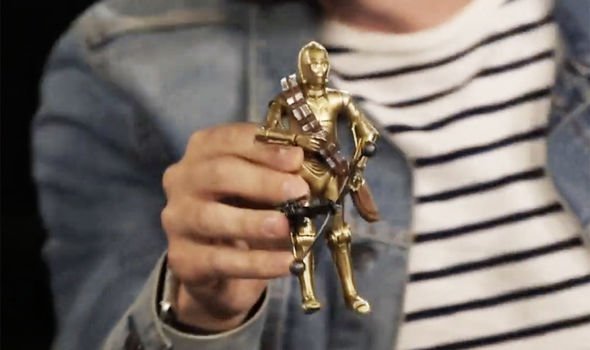 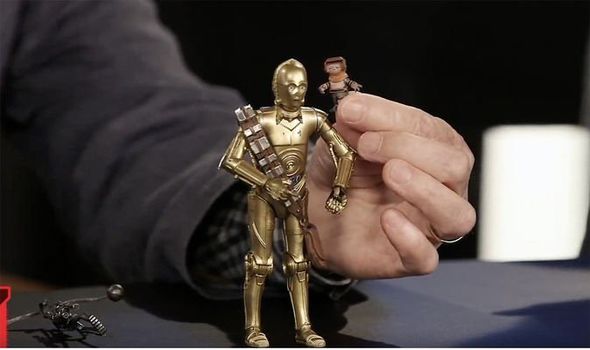 All Daniels could say when he saw the action figure was; “No spoilers.”

Suotamo added: “You always seem to want my stuff.”

Since the Finnish actor plays Chewbacca, it can now be taken as canon that C-3PO will wield the Wookiee’s bowcaster. But why?

Some recent leaks suggest very bad news for Chewie while others believe C-3PO will meet a dark and glorious end in Episode 9 when a different programme is uploaded into his body.

The panel also revealed a new model of a mystery figure Daniels called “one of my favourite characters from the whole movie.” 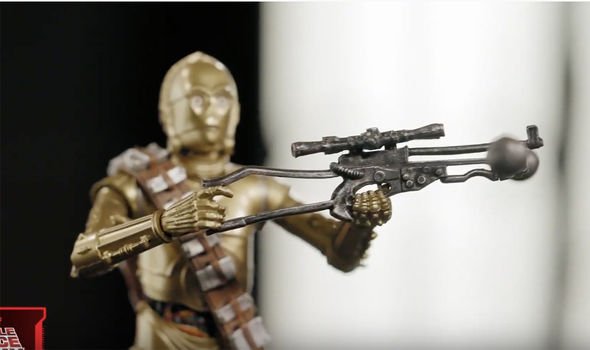 It was a tiny little figure, so small it could perch on the C-3PO’s models shoulder.

Daniels said: “That is remarkable. Babu Frick is one of my favourite characters from the whole movie and I’m not sure I can go further than that.

The host added: “We know he is a droid builder.”

This ties in with reports of a snowy planet with a droid factory. Again, there are numerous suggestions the rebels are seeking someone who can replace C-3PO’s personality for a critical mission.

All will be revealed in just three months, but fans will be very eager to see Threepio in action.

STAR WARS THE RISE OF SKYWALKER IS OUT ON DECEMBER 19