How do you follow up the best episode your series has ever had?

That was the challenge facing “Star Trek: Discovery” this time around. Last week’s “Forget Me Not” was as stirring as the best of “Trek” past, and it combined a self-contained character episode with some advances in the season’s long-game of an arc. But here’s the deal: “Die Trying,” this week’s ep, is almost as good. All those criticisms we’ve had about the supporting characters getting such short shrift on this show? Out the window once again. This one put the spotlight on Rachael Ancheril’s intriguing Nhan, even if it was a send-off as much as an exploration.

The worry after “Forget Me Not” was that Discovery would have a lot of obstacles in their path before they finally got to Starfleet Headquarters. But no, this show seems done with filler. “Die Trying” opened with the ship approaching a strange “displacement” bubble — basically a glorified cloaking device — inside of which was all that’s left of Starfleet. But the Starfleet that’s there is actually pretty impressive: Tilly, Owosekun, and other crewmembers geek out over ships made with organic hulls, or completely holographic hulls, or are capable of having 2,000 crewmembers or more. One of the best moments for fans is when they see the NCC-74656-J, the 11th ship to bear the name USS Voyager. It certainly looks better than the Enterprise-J! That was the 26th Century ship infamously glimpsed on “Star Trek: Enterprise.” (And this isn’t the only “Enterprise” reference you’ll be getting from this review — or this episode.)

All of this was magical: a bit of pure discovery conveyed through decent visual effects, the kind of worldbuilding “Star Trek” hasn’t done in a long time but was once so much a part of its DNA, like during that endlessly long “approaching the Enterprise” sequence in “Star Trek: The Motion Picture.” It’s good not to take wonders for granted. 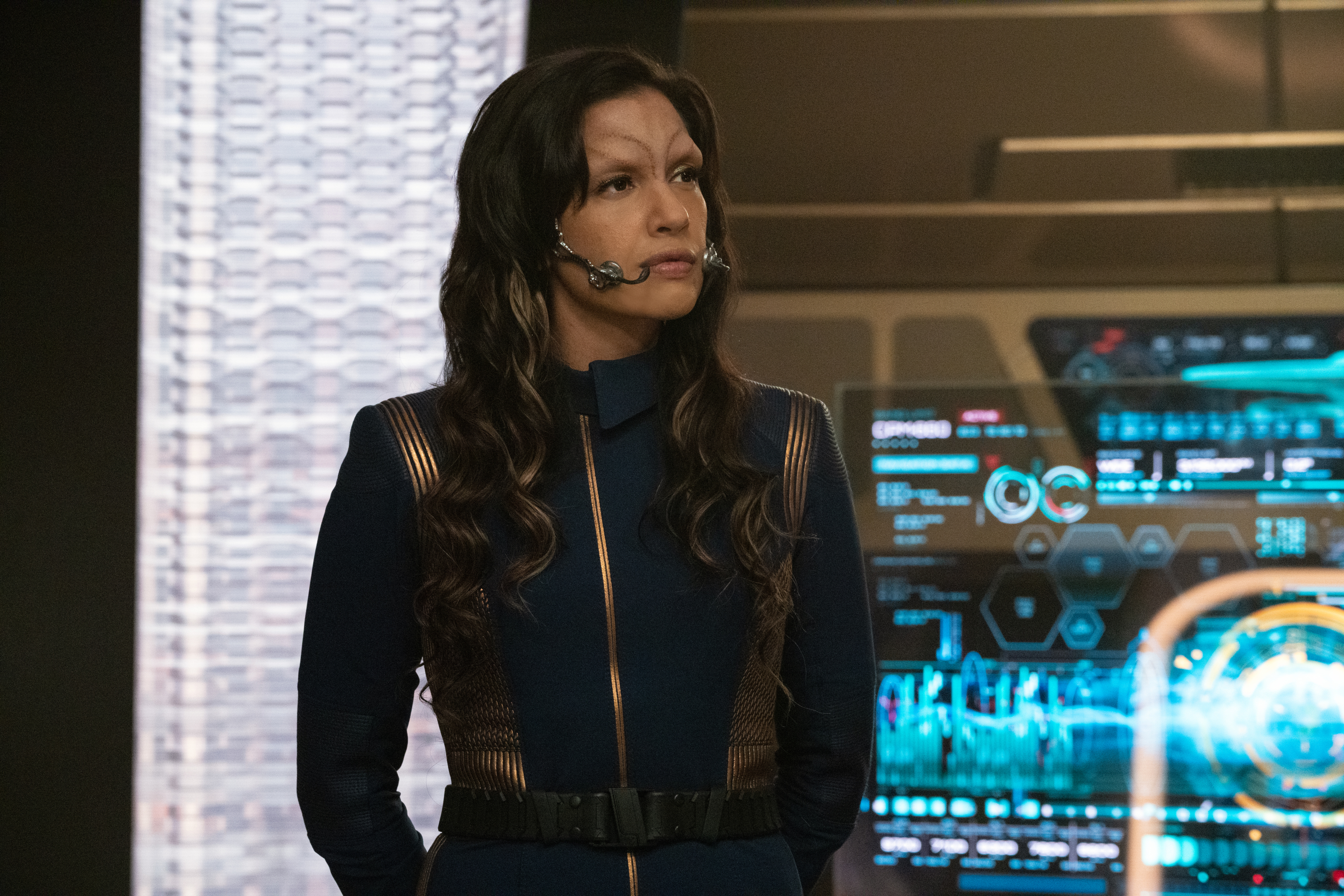 Nhan (Rachael Ancheril) gets the character-study treatment we’ve been hoping for her.

Aboard the “floating rainforest” station inside the disturbance, Saru and the crew were greeted by Starfleet Commander in Chief Charles Vance. He’s instantly skeptical: There’s no record of Discovery in their database at all. If anything, the fact that they’re time travelers means they might be agents of a faction from the Temporal Wars (that featured so heavily in “Star Trek: Enterprise”). So Saru agrees to let Vance requisition the ship and reassign the crew elsewhere: they’re going to be separated. Serving Starfleet is the end goal, after all.

Burnham isn’t having it, though. “If this crew gets pulled apart now, some of us may never recover,” she says. She wants to find a way to show Vance why they should all stay together. And a mission practically falls into her lap: a group of aliens, all CGI and in distress, have been poisoned by some strange seeds they picked up on a nearby world. This is where some knowledge of Federation history comes in handy: Burnham asks if the USS Tikov, an archive ship that houses seeds and spores of plants native to worlds all across the Federation, is still in service. Remarkably, it is — or at least a later ship bearing the same name. The last crew of the Tikov was a Barzan family, the same species as Nhan (and first introduced in the TNG episode “The Price,” as the aliens selling a wormhole to the highest bidder, leading to some infamous Ferengi shenanigans). So Burnham and Nhan go on a mission to the Tikov (with Nhan finally being able to ditch her breathing apparatus, since the atmosphere inside the Tikov was calibrated for Barzan physiology).

There’s something strange aboard the Tikov: And not just the guy who’s trapped in transporter stasis, never fully rematerializing. It’s that the holos of his family show them playing the same tune that Ian Alexander’s Gray played on his cello in “Forget Me Not” — somehow this strange melody unites people across light years who’ve never seen each other before. Methinks, the spore network is afoot! Or maybe it’s something else: something that could unite people separated by vast distances — almost like another event occurring everywhere at once. The Burn.

Either way, this show now has one of its big mysteries in that tune. Another one? Whatever’s going on with Georgiou following her debrief. It seems oddly similar to what’s been happening to Detmer, now prone to spells of just staring off into space not reacting to whatever’s happening around her. Georgious got as her Federation interrogator an officer played by… David Cronenberg! 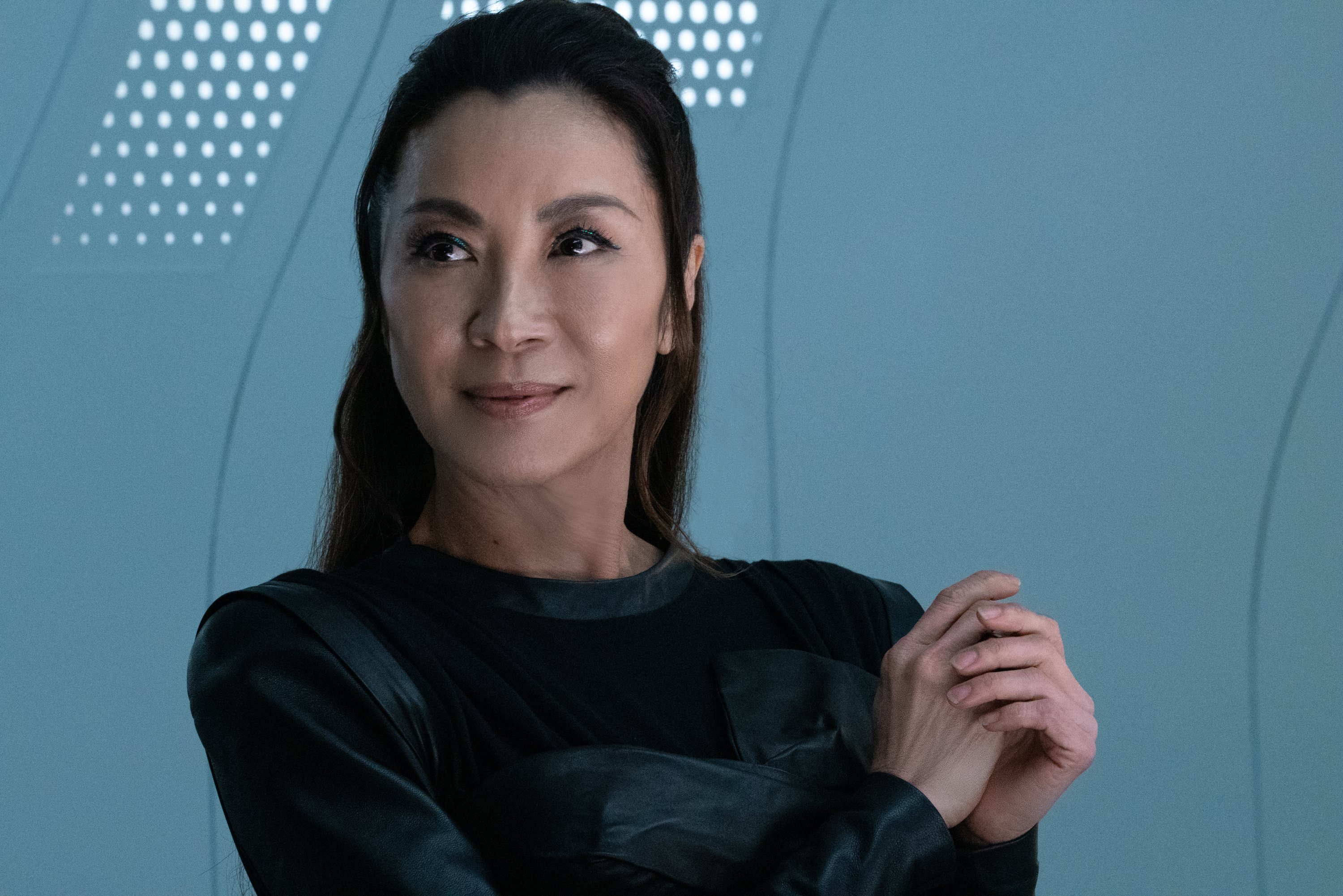 Michelle Yeoh may have met her match in David Cronenberg’s Federation intelligence officer.

It actually makes sense when you think about it. “Star Trek: Discovery” is filmed in Toronto. Cronenberg is based in Toronto and one of Canada’s national treasures. This is a match made in the cosmos. Anyway, Georgiou thought Cronenberg was putty in her hands, even finding a creepy way to blink at just such a frequency as would cause his holographic AI’s to short out. And she made fun of his glasses! “I wear them because they make me look smart,” he said. But then when she leaves the “Dead Ringers” director’s company, she seems in a daze. Could he have been the 32nd Century version of a Section 31 agent, and has he done something to recruit Georgiou to his cause? Or has he done something even more sinister?

So that’s now two great mysteries added to this season via “Die Trying.” Back on the seed ship, Burnham and Nhan solve the problem of that guy trapped in transporter limbo. They need to bring him back to Starfleet for treatment. But he refuses to leave his deceased family, also onboard the Tikov. Nhan agrees to stay with them and fly the ship back to Barzan. That way, she can also leave Starfleet behind and rejoin her people. It’s a sign of how much Burnham has grown that she doesn’t argue with Nhan to stay. “A year ago I would have,” she says. Nhan has some beautiful words for Burnham telling her that she lives up to Starfleet’s highest ideal: “to reach for the best in ourselves and in each other.” And with that, they bid farewell.

Burnham brings the seeds back to Starfleet and the CGI aliens are cured. See? Discovery can be useful if you keep it operational and its crew intact. Vance is convinced. He notes that “Starfleet doesn’t do exploration anymore” but sees how they could serve the Federation. And with that, the Discovery crew has a new purpose.

More than ever, the 32nd Century feels like home.

“Star Trek: Discovery” is available to stream on CBS All Access.

‘The Bachelorette’: Bennett and Noah Face-Off in a ‘Dreaded’ Two-on-One Date — So Who Goes Home?