The stakes of the original 1996 “Space Jam” were always silly: To keep the beloved Looney Tunes (Bugs, Daffy, Sylvester, Tweety, et. al.) out of the clutches of an uninspired alien businessman who wanted to use their visage to trump up his failing amusement park, the tribe enlisted Michael Jordan to play a space-set basketball game to earn their freedom. That concept is strange enough (though not strange enough to keep the film from making over $250 million at the box office and capturing the hearts and minds of an entire generation of kids); even stranger was that this blatantly commercial film was about the dangers of, well, commercialization. Free the Tunes from a life of corporate servitude by sticking them inside a ridiculous blockbuster designed to sell merchandise for a major entertainment conglomerate and one of the biggest sports franchises in the world? Oh, the irony.

That it took 25 years for Warner Bros. to cook up a sequel is perhaps the only surprising wrinkle in an otherwise depressing tale about what the stewards of classic characters really think about the value of art in a content-mad world. Some of that waiting time between films has to be owed to the necessity of casting a new star on par with Michael Jordan to lead it, and Warner Bros. delivers on that promise thanks to the casting of LeBron James (as himself, kinda) as the film’s human lead. Directed by prolific filmmaker Malcolm D. Lee and scripted by no less than six screenwriters (not counting the four who crafted the original film), “Space Jam: A New Legacy” is as relentlessly odd as its predecessor, but its even giddier interest in corporate synergy turns it into a far more cynical outing. It will sell so many plush toys.

When we’re first introduced to the on-screen LeBron James (given the gentle retconning applied to his legacy and the casting of professional actors as stand-ins for his family, we’re going to treat the role as just that, a role), he’s a scrappy young baller waylaid by his other big interest: video games. When young LeBron (Stephen Kankole) loses a big game because he spent too much practice time jamming away on a GameBoy, he rededicates himself to basketball, literally tossing away said distracting GameBoy. The result: adult LeBron (played, well, by LeBron James) is a major star and something of a taskmaster. His two sons (Ceyair J. Wright and Cedric Joe) like basketball too, but damned if their dear old dad doesn’t take the fun out of it.

Middle kid Dom (Joe) is very into video games (he’s even built his own, a natty spin on basketball called DomBall), an obsession that LeBron now struggles to fully understand. Dom wants to “do me,” but that’s something LeBron hasn’t done for decades, so the message never quite sticks for the sports titan. In hopes of bridging the divide between the James men, LeBron takes Dom to a meeting at Warner Bros., during which Sarah Silverman (sure) and Steven Yeun (yes?) pitch him an idea cooked up by their genius algorithm that essentially involves injecting a digitized LeBron into all of Warner’s most popular franchises. LeBron does not dig it, but Dom gets what they’re going for. 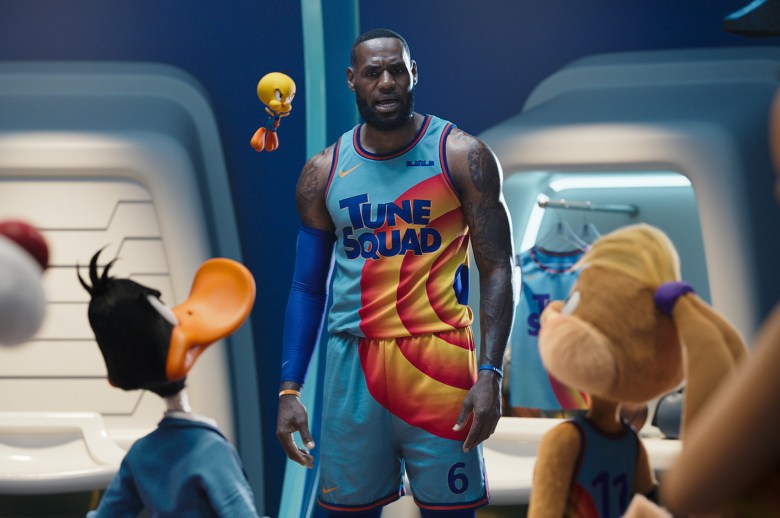 That’s great news for the literal embodiment of said algorithm: the equally brilliant and nefarious Al-G Rhythm (like “algorithm,” get it?), who then forcefully digitizes the James men and makes them face off in a play-for-keeps game of DomBall. No one can accuse star Don Cheadle of not giving his all to the film as the tricky Al-G. In a performance that straddles the line between Oscar-worthy and Razzie-demanding, Cheadle is always enthralling. (Also, he’s got a cute, animated sidekick named Pete, who exhibits big Clippy energy, one of those transparent additions that actually works; he’s so cute!)

This thin and baffling premise throws LeBron and Dom into the Warner Bros. “ServerVerse” where various WB properties exist as different planets. This includes the nearly unpopulated Tune World, in which LeBron is forced to field his team. The film’s occasional self-reflexivity — early on, LeBron cracks that “athletes acting, that never goes well” — don’t absolve “Space Jam: A New Legacy” for its many sins, most of them delivered in service to a profoundly unsettling idea of what makes people like movies. (Also of note: James isn’t exactly a skilled actor, but he always seems happy to be there and purposely goofy sequences that see him becoming temporarily animated are genuinely fun.)

Dom fares much better, crafting his own team from a cadre of actual NBA stars and then melding them into wild video game characters. Of course he’s going to win! And so will Al-G! It is only good taste that will lose. And while Dom’s video game skills are unmatched, perhaps his father isn’t entirely wrong about wanting to pull him out of immersive digital experiences for a bit: He’s a sweet kid, but he has zero social awareness. How else would anyone not realize that Al-G is so obviously up to no good until the last possible moment?

Armed with Bugs Bunny and no one else, LeBron sets off to gather the other Tunes in a last-ditch effort to a) win the game and b) keep Al-G from digitizing the world. The duo zip around the ServerVerse — a word so depressing that it hurts to type — to collect the rest of the team, including a stopover in the world of DC (Daffy Duck is pretending to be Superduck; there’s a good gag about a runaway train crashing into an orphanage that indicates at least one of the film’s many screenwriters has an actual sense of humor), a trip to “Mad Max” land, even quick stopovers to “Casablanca” land and the world of Austin Powers. It should be fun and silly, but it feels like a commercial for Warner Bros.’ deep selection of IP — a sizzle reel for a movie studio, not an actual movie.

The big game (not set in space, but who cares) occupies nearly half of the film’s nearly two-hour running time, and is colorful and wacky and twist-laden enough to help pass the time. Al-G, no longer interested in an anonymous life, invites everybody to watch, including the human fans who think they’re just enjoying the game from their phones, plus a truly weird assortment of other Warner Bros. characters. And while that sounds kind of cute — look, Yogi Bear and Boo-Boo are watching the game! so are beloved modern stone-age family The Flintstones! — it’s one of the film’s strangest and most cynical elements. 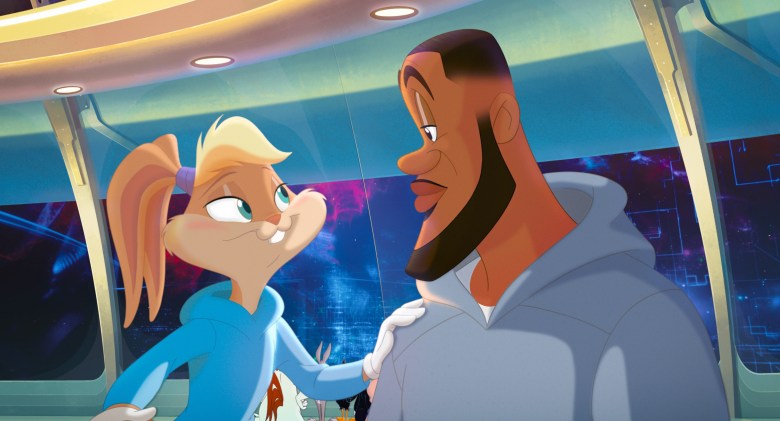 Tucked alongside Jellystone’s favorite bears and the iconic Stone Age clan, there is a cavalcade of truly discomfiting pals: War Boys from “Mad Max,” The Joker, King Kong, a whole pack of Gremlins, The Mask, Pennywise the Clown, a bunch of “Game of Thrones” extras, and yes, as indicated in the film’s trailers, the droogs from “Clockwork Orange.” (Has anyone at Warner Bros. watched that film recently? Anybody at all?) Who is this film for, you might wonder, and the answer is clear: anyone who loves Warner Bros. intellectual property and creative content, of course! What could possibly be more depressing than that?

Much of this messaging will be lost on the film’s target audience which, despite whatever gross stuff you find on the Internet, is actually children, not overgrown adults hung up on the entertainment of their childhoods. No LeBron James-mad tween or Looney Tunes-obsessed toddler will latch on to the droogs and beg their parents to let them see their film (we can only hope), but that doesn’t change the fact that their inclusion runs counter to everything the film pretends to be about.

Ostensibly a family film — again, despite the inclusion of characters best known for criminal violence — “Space Jam: A New Legacy” attempts to land on a feel-good message. All this cheap, cloying material? It’s really about bringing together a family and encouraging our best and brightest young minds to follow their dreams. It’s a sentiment that should be immune to cynicism, but somehow “Space Jam: A New Legacy” finds the space for it. Truly, it has everything, except an actual heart.

A Warner Bros. release, “Space Jam: A New Legacy” will hit both theaters and HBO Max on Friday, July 16.

As new movies open in theaters during the COVID-19 pandemic, IndieWire will continue to review them whenever possible. We encourage readers to follow the safety precautions provided by CDC and health authorities. Additionally, our coverage will provide alternative viewing options whenever they are available.