He made the comment while on a channel contributor’s stream 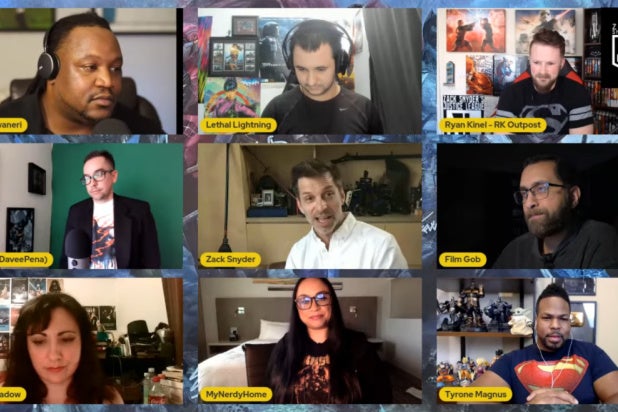 “Zack Snyder’s Justice League” has finally seen the light of day on HBO Max, but that’s not the only way Zack Snyder made waves Wednesday night. On a charity stream celebrating the launch of the Snyder Cut, the director slammed the alt-right YouTube channel Geeks + Gamers, which had been a vocal part of the #ReleaseTheSnyderCut crowd.

It was a bit of a surprising thing for Snyder to say, because the stream he was on was hosted by Uche Nwaneri, a Geeks + Gamers contributor.

“Just a quick thing before we get started,” Snyder said as he was introduced about an hour into the charity livestream.

“I know that on our donation page, we still have the Geeks + Gamers logo. I just wanted to say that I really — we talked about this and we’re really not associated with Geeks + Gamers as far as I’m concerned. I really wanna make that clear.”

In addition to Nwaneri, two other Geeks + Gamers contributors, Ryan Kinel and Lethal Lightning, were also on the stream. Neither Nwaneri nor Kinel directly addressed Snyder’s comment on the stream, but Nwaneri tweeted out a thread with his response.

“To be a part of this stream with @ZackSnyder was an honor and a dream on a level I still have a hard time believing. We did an amazing thing and I wont let anything anyone has to say diminish that FACT. @KinelRyan and @LethalLightnin helped put together a JUGGERNAUGHT of an event, and I love them for the hard work and dedication they put into helping make this thing go smoothly. We accomplished something that a lot in our community can’t touch. Won’t touch. They will hate on it. They will pick it apart. They will claim this or that. I don’t care. The lion does not concern itself with the opinion of SHEEP.

“Was there controversy? Wouldn’t be a proper f—ing stream with this community at @GeeksGamersCom if there wasn’t. Thats why I love them. We rise above bullshit, regardless. There are deep misconceptions about what WE TRULY are about. SO BE IT. My deepest thanks and sincere love to EVERYONE who was on the panel + EVERYONE who showed support and love.”