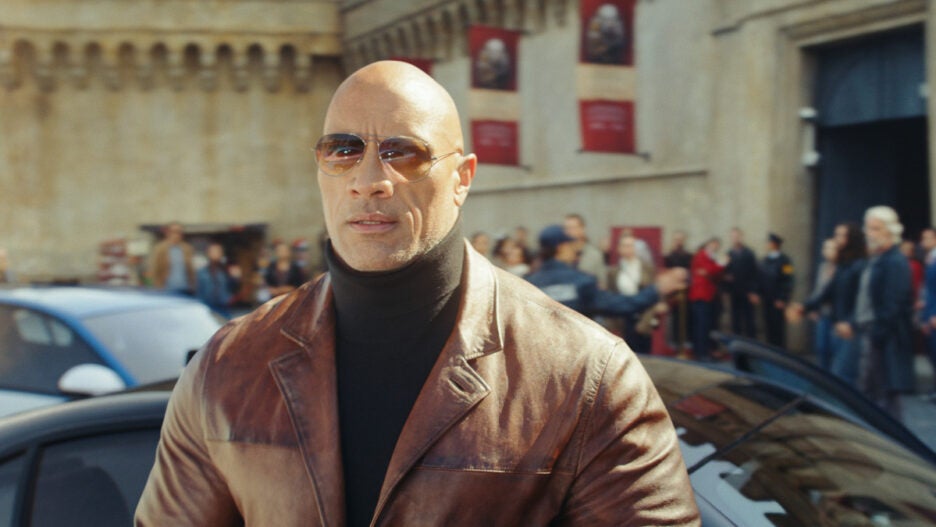 Warning: Spoilers for the “Red Notice” ending follow below.

Dwayne Johnson is one of the biggest movie stars in the world, and he has a tendency to play the hero in almost everything he does. But his new Netflix caper “Red Notice” throws a curveball in the final act that recontextualizes the entire movie we’ve just seen, and sets up a tantalizing table for a potential sequel.

Below we dig into that twist ending, with a little help from producer Hiram Garcia who offers some insight into how long it was planned and how likely a “Red Notice 2” is.

When “Red Notice” begins, Johnson is introduced as an FBI profiler named John Hartley. He apprehends thief Nolan Booth (Ryan Reynolds) when he’s attempting to steal one of Cleopatra’s eggs, but after Booth is shipped to prison, Interpol discovers that the recovered egg is now missing. Viewers know that thief Sarah Black (aka The Bishop) took it while Hartley was transferring the artifact, but Hartley is now fingered for the crime and sent to prison alongside Booth. The only way for the two of them to clear their names is to track down the final two eggs before Black – who operates as the shadowy master thief known only as “The Bishop” — gets her hands on them. 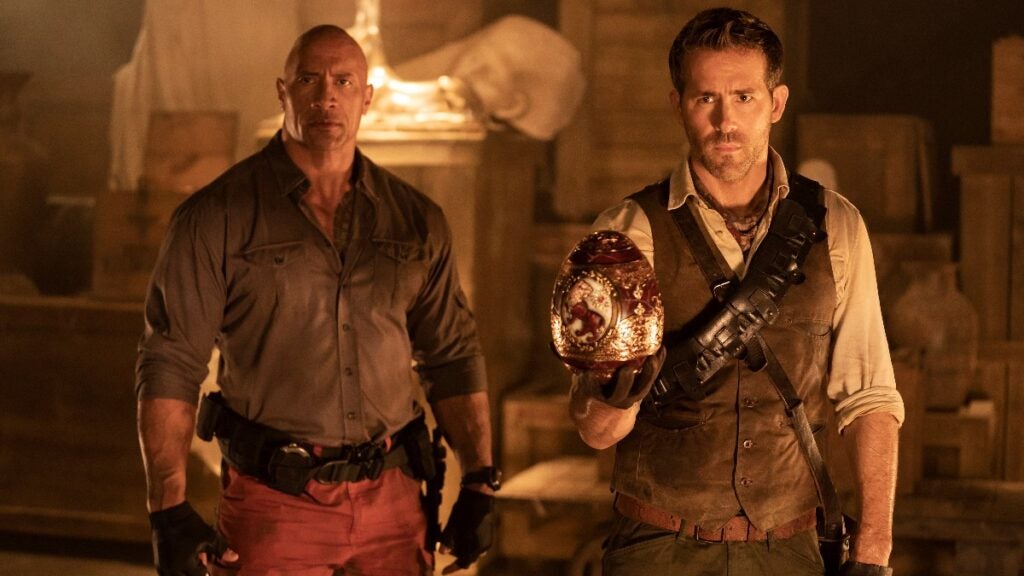 As “Red Notice” barrels towards its conclusion, Booth reveals that his father (with whom he had a complicated relationship) had spent his entire life trying to track down Cleopatra’s missing third egg. As it turns out, Booth’s father had the key to its location all along, and he and Hartley track it down in the South American jungle – only to be followed there by both Interpol and Sarah Black.

The trio of Hartley, Booth and Black narrowly escape by driving a car off a waterfall into a reservoir (physics lessons not included), and when Booth surfaces with the egg, he notices that Hartley hasn’t yet come up. He makes a tough call and leaves the egg on the beach to try and save his friend’s life (despite their frenemy-like relationship thus far), only for Hartley to step out of the jungle and grab the egg himself.

It’s here when it’s revealed that Hartley and Black have been working together all along. “We’re both The Bishop,” Black reveals as the film flashes back to earlier events to show how the romantic partners were actually working together. “I passed the first egg on to her in Bali,” Hartley explains. “She took the second egg from Sotto Voce, and the third egg, well, the only way for us to get our hands on it was if you led us right to it. Which, you did.”

Booth is displeased to say the least, and asks Hartley if all of their misadventures were a lie – including the heart-to-heart they shared about their fathers. “No, that was true,” Hartley replies. “My dad was a con man and I hated him. So I decided to be better than he ever was, beat him at his own game.”

Hartley and Black leave Booth tied to a tree and ride off into the sunset with the third egg in tow. The End. Or is it…?

Setting Up a Sequel 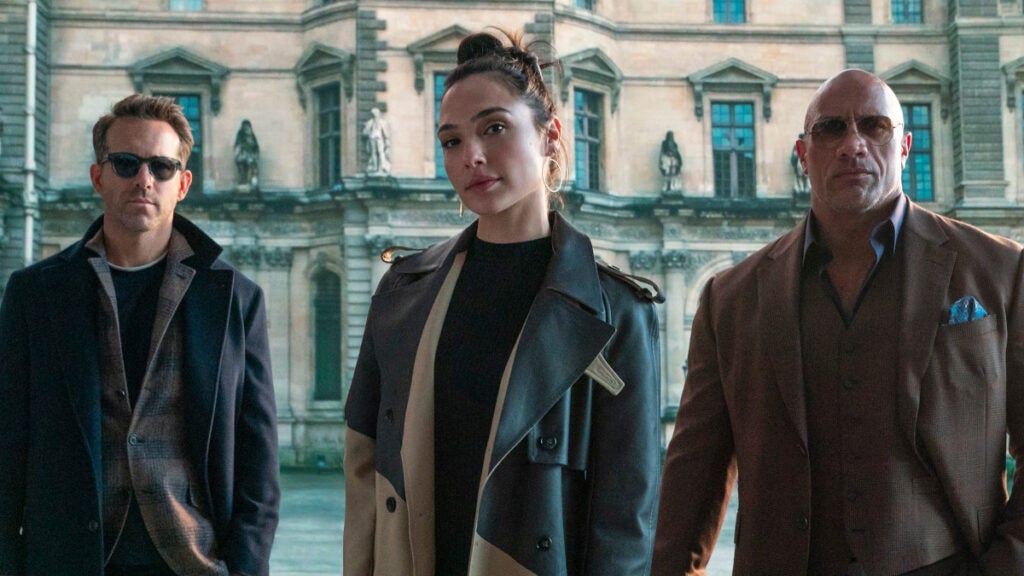 The final scene in the film finds Hartley and Black surprised by Booth as they’re living luxuriously on a boat, having sold off the three eggs for a pretty penny. As it turns out, Booth escaped from Interpol’s grasp and now has a new job to pitch Hartley and Black – one they’re unable to refuse now that Booth helped Interpol take all their money and agents are closing in on their location at this very moment. “There’s a new score,” Booth proposes. “Double the payout, triple the challenge, plus here’s the best part: it’s a three-thief job!”

As the film ends, we see Booth, Hartley and Black walking towards The Louvre, seemingly ready for an even bigger heist.

So is “Red Notice 2” a done deal? Producer and president of production at Seven Bucks Productions Hiram Garcia told TheWrap in an interview that the team would love to make “Red Notice 2,” and writer-director Rawson Marshall Thurber already has an idea for where to take the story. “Rawson pitched us the other day a vision that he has for something going forward,” Garcia said. “We all had a good time with it. We’re all circling on it now, but ultimately, franchises are always a great idea, but we always like to start with the fans, so it’s our job to be prepared to be ready to go. If the fans deem it worthy and love it like we hope they will, then we will be ready to go.”

However, Garcia did admit that Netflix is eager to make “Red Notice 2,” saying, “Netflix is definitely ready to go. There’s no doubt about that. They’ve said, ‘Just let us know, guys. We’re ready!’”

That Twist Was Planned All Along 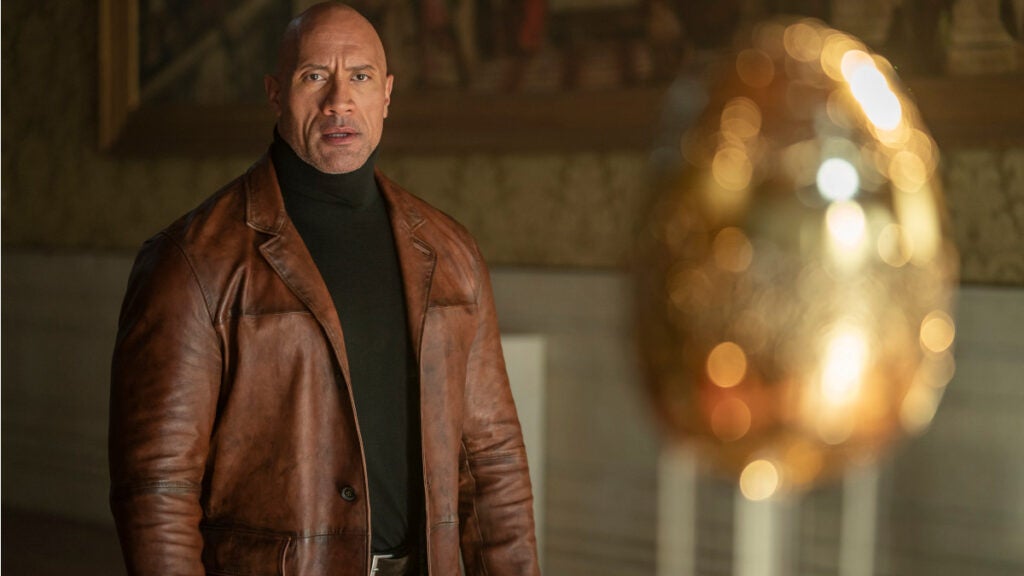 Johnson playing a bad guy playing a good guy is a swell twist, and in TheWrap’s interview with Garcia, the producer revealed that ending was planned from the beginning – all the way back to Thurber’s original pitch for the story when they were making the 2018 film “Skyscraper” together. “That, without a doubt, was always the big hook that got everyone at the end of the pitch, the twist that you didn’t see coming,” Garcia said. “It was one of those things that was so appealing to DJ, that at the end of the movie, while everyone else you kind of had an idea of, ultimately, Hartley is a character that we don’t know much about. He’s a bit of a chameleon, and you’re left wondering, ‘How much of that backstory with his father is true?’”

Garcia noted that in the construction of the film, they wanted to make sure the twist remained a surprise. “We worked hard to conceal it,” he said. “We tested the movie and 99% of the audience always said they never saw it coming. There’s always one person who’s like, ‘I saw it coming.’ And then we’d ask, ‘Did you really see it coming?’ To which they’d respond, ‘No, I didn’t see it coming.’ They just didn’t want to admit it (laughs). We felt we did a decent job of scrubbing it to keep it pretty clean so that you wouldn’t see anything hinting to it.”