While the years following 2016’s “Moonlight” have been surprisingly fruitful for high-quality queer film, one might not know it from glancing at Oscar nominations from years past. Last year, Céline Sciamma’s luminous period romance “Portrait of a Lady on Fire” was not even selected as France’s official entry for Best International Feature, despite provoking universal critical reverence. “Parasite” rightfully swept the 2019 ceremony, its double win for Best Picture and Best International left no hope for Pedro Almodóvar’s semi-autobiographical “Pain and Glory.” The year before that was a bit of an anomaly, with three queer films earning Best Picture nominations, “The Favourite,” “Bohemian Rhapsody,” and “Green Book,” that year’s controversial winner. (Only “The Favourite” was actually good, and actually queer.) In 2017, we had the magical lush gift of “Call Me by Your Name,” and the world seemed open to us forever.

Of course, before “Moonlight” changed the game in so many ways — for Black films, queer films, and indie films — the story was very different. There was the head-scratching omission of Todd Haynes’ “Carol” from 2015’s Best Picture nominations, despite the film earning six other nods and there being only eight films in the running out of a potential 10. That year, Eddie Redmayne was nominated for portraying a trans woman in “The Danish Girl,” after Jared Leto had won for doing the same thing in “Dallas Buyers Club” the year before. And we may never recover from “Brokeback Mountain” losing out to “Crash” in 2005, a film that tops every critics’ list of the worst Best Picture winners of all time.

This year could be different. As the awards race heats up and smaller accolades roll in, there are multiple queer film contenders in almost every big category. None of the films reach “Carol” or “Call Me by Your Name” levels of overt queerness, with a central love story or queerness as the main focal point, but in a way that’s pretty refreshing. If only one of these films, subtle and sly in their dealing with sexuality, were in the awards conversation, it might feel cheap or paltry to point to queerness. But taken all together, with contenders across multiple categories, it feels like a paradigm shift. Or at least the beginning crest of one.

“The Power of the Dog”

Leading critics group awards is Jane Campion’s “The Power of The Dog,” a smoldering, deconstructed Western starring Benedict Cumberbatch as Phil, a prickly cowboy who’s been emotionally twisted by lost love and punishing Montana winters. When his brother marries a local widow (Jesse Plemons and Kirsten Dunst), he takes a cruel interest in her teenage son Peter (Kodi Smit-McPhee). Ruling over the cattle ranch with an unpredictable mean streak, Phil never misses an opportunity to rib Peter for his soft lisp or swishy walk. Home from boarding school for the summer, Phil slowly takes the boy under his wing, teaching him the rancher’s ways. It’s a tense and tricky dance, full of unexpected turns and crafty psychological warfare. It may not turn out how that other cowboy drama did, but the last laugh feels as empowering and triumphant as this world allows.

An inspired mix of genres allows this gripping animated documentary to transcend its wrenching story, offering intimate access to a story so personal and dangerous that its subject has never uttered a word of it before. The subject is Amin Nawabi, a Danish-Afghani man who arrived in Denmark 20 years ago as a child refugee. For the first time in his life, he tells his real story to his best friend, Danish filmmaker Jonas Poher Rasmussen, who listens openly from behind the camera. The film is seen mostly through rotoscope animation, a technique where animators trace over video footage, creating a simple but effective 2D appearance. The animation not only protects Amin’s identity, but easily transports the viewers through Amin’s harrowing journey from his childhood in Kabul to his family’s purgatory in Russia, and his eventual arrival in Copenhagen. 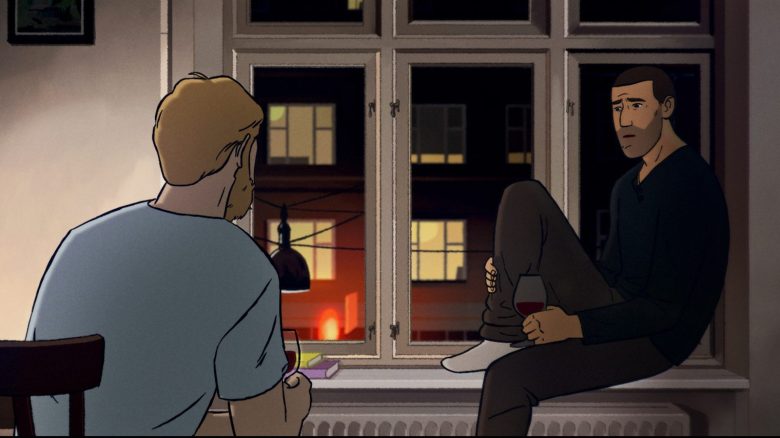 Amin and Kasper in “Flee”

Rasmussen breaks up the story with Amin’s present day struggles, showing how Amin’s past is affecting his relationship with his Danish fiancé Kasper. Kasper wants to buy a house and move to the country, while Amin chases professional opportunities abroad, hoping success will ease the guilt of the sacrifices his family made for him. It’s the kind of contemporary relationship issue that would be too subtle for a narrative film, but makes perfect sense as a real life conflict. In their highest form, documentaries can reveal humanity far more effectively than a written script ever could. “Flee” hits all those notes, and then some.

Pedro has done it again. In Almodóvar’s latest masterwork, he reunites with longtime muse Penélope Cruz for a resplendent return to form. Solemn and lighthearted, mysterious and simplistic, sexy and sad — “Parallel Mothers” wraps themes of motherhood, nationhood, and ancestry into a buoyant adventure full of intrigue and heartbreak. Only Almodóvar could make it work. Cruz plays a photographer named Janis, who becomes pregnant from a casual love affair and decides to keep the baby. In the birthing suite, she meets an unmarried girl named Ana (radiant newcomer Milena Smit), and they exchange numbers.

Their motherhoods proceed very differently, and the two women find each other by happenstance, striking up a relationship that straddles many lines. Unbeknownst to Ana, Janis harbors a secret that would change both of their lives even as Ana falls madly in love with the older woman. The film is dripping with mothers and mother figures, and provocatively explores the myriad ways in which women entwine themselves with each other. It may not be Almodóvar’s best, but it’s his best in years, and that’s far better than most.

Rebecca Hall’s “Passing” is an impressive dance in ambiguity, from its cleverly edited ending to its chameleonic central figure Clare (Ruth Negga). Based on Nella Larsen’s equally ambiguous 1929 novel, “Passing” engages in every sleight of hand possible without ever feeling evasive. The way Irene (Tessa Thompson) stares at Clare could be interpreted in many ways, though Thompson herself has said she played the character as queer. Negga, too, understands that Clare’s power lies in seduction, whether it’s a friendship or something more.

The gorgeous vintage costumes aren’t the only reason to see Pablo Larraín’s chillingly campy “Spencer,” but they might help get some skeptics in the seats. Kristen Stewart excels as the unraveling Princess Diana, delivering one of her best performances as the tortured royal over a tensely traditional family Christmas. Diana’s one friend is her amiable dresser Maggie (an adorable Sally Hawkins); the only time Diana seems to breathe is when she’s in the room. Though it’s too brief a respite for everyone involved, the joy echoes off the waves during their stolen frolic to the beach, and Maggie gazes upon Diana with a pained but fierce affection.

A fun entry into the animation race, Netflix’s “The Mitchells vs. the Machines” stars Abbi Jacobson as a “quirky” aspiring filmmaker on a road trip with her family. Though Katie’s queerness is coded throughout most of the film, the script makes it explicit by the ending, when Katie’s mom invites her girlfriend home for Thanksgiving. It’s a small but noteworthy moment in children’s fare, which has been slower to embrace LGBTQ stories.