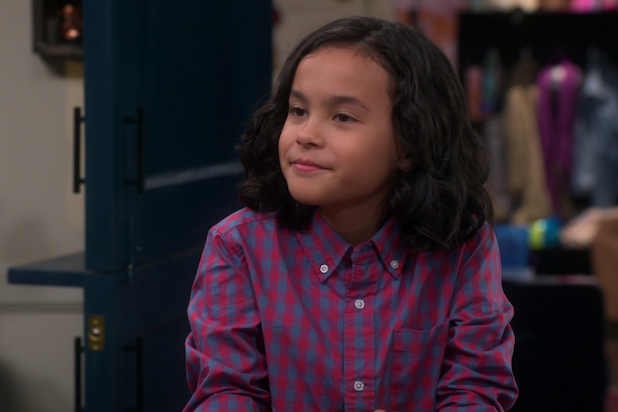 The “Punky Brewster” revival launched all 10 of its Season 1 episodes Thursday on Peacock, introducing fans of the classic ’80s sitcom to a grownup Punky (played by original star Soleil Moon Frye) and her family of three unique kids — Hannah (Lauren Lindsey Donzis), Diego (Noah Cottrell) and Daniel (Oliver De Los Santos) and one very involved ex husband, Travis (Freddie Prinze Jr). That group gets an extra addition in the pilot, when Punky decides to walk in her adoptive father’s footsteps and foster a little girl named Izzy (Quinn Copeland).

And the love and support Punky shows by bringing one more kid into her big blended family is just the beginning of the compassion she gives her kids throughout the revival — including a difficult storyline for her youngest son, Daniel, in Episode 6, titled “The Look of Daniel.”

In the series premiere, viewers see Daniel experimenting with eyeliner and painting his nails, which Punky tells Travis she thinks is probably more than a “phase” for Daniel. The conversation about Daniel’s “gender expression” comes up again in Episode 6, when Daniel is bullied at school for wearing a sarong Hannah made him, and Diego gets in a fight defending his little brother.

And though Punky and Travis worry for the better portion of the episode about the best way to talk to Daniel about the bullying and his gender nonconformity, Daniel is more than comfortable telling Punky at the episode’s end that she doesn’t have to overthink it, and he wants to talk to her about the fact he really doesn’t know everything about himself yet.

“I think the reason Daniel is so confident and open with his family is because Punky has really provided so much love and support to all the kids and is accepting of them as their own people,” 11-year-old De Los Santos told TheWrap. “And he trusts that she loves him. But also, I think that he just knows that it’s important to do what feels best for yourself and be true to yourself. And it doesn’t matter what anyone else thinks. I’m really proud to be bringing Daniel to life on TV, and I hope that it gives anyone out there who needs encouragement to be their true selves the confidence to know that it’s OK to do that.”

De Los Santos originally auditioned for both the roles of Diego and Daniel, and was told by producers of Daniel’s “gender nonconforming” status before his callback, “because they made sure I was OK with it first” and “it was super-important for them that I was comfortable with that part of the role.”

“In real life, what we have in common is that I have an older sister and I’m the youngest — but then Izzy comes along and Daniel becomes a middle child,” the actor said. “We have a different style, he’s a neat freak and he likes to wear quite nice clothes. But I usually just wear like a band T-shirt, I love ’70s and ’80s rock. But even though we’re different, I still think he’s cool.”

The “Punky Brewster” revival is streaming now on Peacock.