Among the many shocking things we learn in The Crown Season 4, the royals turning a blind eye to Prince Charles’ ongoing affair with Camilla Parker Bowles—while fully expecting Diana to remain faithful—really takes the messed-up cake. Like, the actual audacity of this double standard!!!

And interestingly, while our fave *fictional* Netflix series went deep into Charles and Camilla’s whole thing, the show didn’t actually spend that much time on Princess Diana’s very real relationship with Major James Hewitt—with whom she admitted to having an affair. Here’s everything you need to know about the other man in Princess Diana’s life, and how he ultimately betrayed her.

Major Hewitt Was Her Riding Teacher

Princess Diana and Major James Hewitt met because he was in the Household Cavalry, and as such, he had been tasked with her riding lessons. Obviously, nothing sounds hotter than having an affair with one’s horse riding instructor, and royal biographer Andrew Morton described Hewitt as a “man of great charm who provided Diana with amusing and sympathetic companionship at a time when she needed a shoulder to lean on because of her husband’s neglect.” 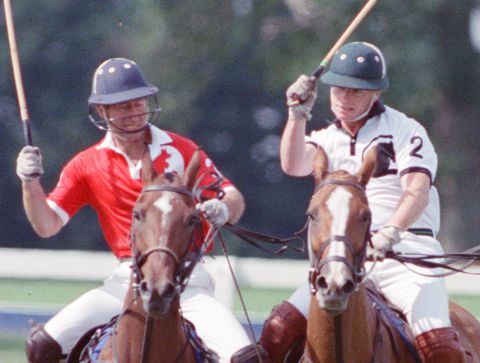 Diana Admitted to the Affair

During her controversial Panorama interview (which is now being investigated by the BBC), Diana said “yes, yes it did” when asked if her relationship with Hewitt went beyond a close friendship, adding that she “adored” him and was “in love with him.”

This rumor has been going on for decades, but the timing simply does not work thanks to Harry being born two years before Hewitt and Diana’s affair. Even press-loving Hewitt shut this sh*t down, simply saying “no, I’m not” when asked if he was the Harry’s father during an interview.

Actually, he betrayed her twice. First, Hewitt agreed to be a source in Anna Pasternak’s book, “Princess in Love.” Diana made her feelings about this known during that same Panorama interview, saying, “I was absolutely devastated when this book appeared, because I trusted him, and because, again, I worried about the reaction on my children.”

She added, “There was a lot of fantasy in that book, and it was very distressing for me that a friend of mine, who I had trusted, made money out of me. I really minded about that.”

In an even more astonishing betrayal, Hewitt attempted to sell his personal letters from Diana for £10 million, telling Larry King, “I think it is important to understand that they are, or will become, important historical documents….I think it might be irresponsible not to sell them and to generate something one can do some good with.”

So…Where Is He Now?

Nowadays, Hewitt appears to be living in Exeter—at least, he was recently photographed wandering around the city amid the investigation into BBC’s Panorama interview. Thus far, he hasn’t commented on his depiction in The Crown’s new season, but give him time. Something tells me he’s the kind of dude who likes press.