On a hot August night in 1969, four murderous members of Charles Manson’s cult “family” invaded the Los Angeles home of pregnant actress Sharon Tate. Her husband, director Roman Polanski, was in Europe on business. What happened next made headlines and, for better or worse, history. You might not remember everything the way that Quentin Tarantino remembers it in Once Upon a Time in . . . Hollywood. But you won’t forget a second of what the writer-director puts onscreen. It’s Tarantino’s ninth film, and he claims it will be his next-to-last. If so, he’s going out with a bang.

The filmmaker gives Sharon (Margot Robbie) a fictional neighbor on Cielo Drive. He’s Rick Dalton (Leonardo DiCaprio), a star of TV Westerns who’s boozing away what’s left of his flagging career. Rick’s only friend is Cliff Booth (Brad Pitt), his stunt double and confidante who lives in a trailer near the Van Nuys Drive-In with a rust-colored Rottweiler named Brandy. Cliff is a Vietnam vet and has been largely unemployable since rumors started swirling that he killed his wife and got away with it. 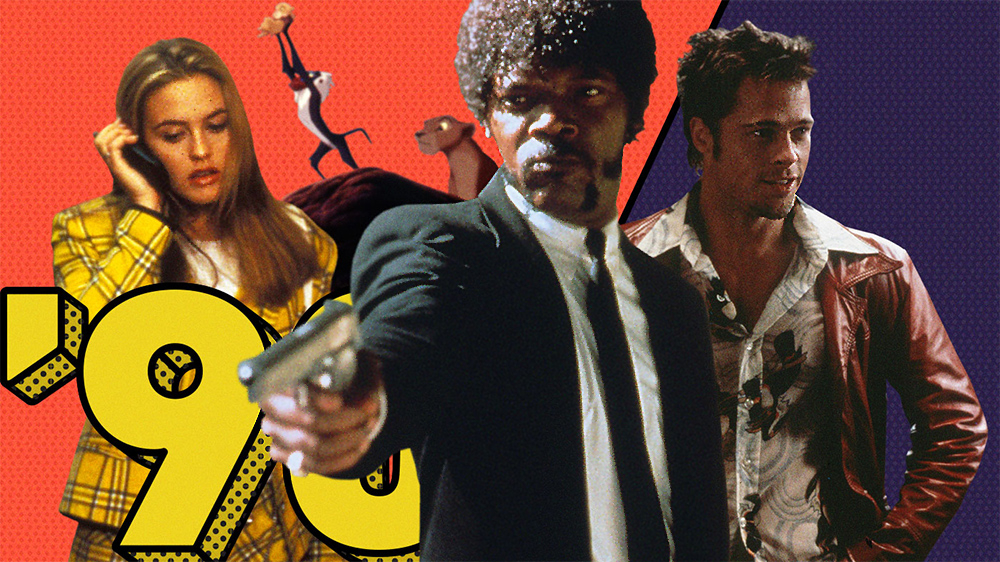 The 100 Greatest Movies of the Nineties

It’s a ballsy Tarantino move, casting two of the biggest and most likable stars in Hollywood as losers. But DiCaprio (Django Unchained), 44, and Pitt (Inglourious Basterds), 55, do him proud working against type. They’re a landmark screen team whose explosively funny, emotionally complex performances stand with their very best. Pitt is flat-out hilarious when Clint gets a stunt job on The Green Hornet and goads an arrogant Bruce Lee (Mike Moh), starring as Kato, into a battle that ends badly for the Fists of Fury legend.

DiCaprio also wins big laughs trying to disguise Rick’s woe when his career hits the skids. A high-powered agent (Al Pacino, having a ball) tells the actor he’s killing his career doing guest spots as villains in TV shows. In a satisfying irony, he receives the best reviews of his career playing the heavy. Success also follows when Rick heeds his agent’s advice to star in spaghetti Westerns abroad, like Clint Eastwood and Burt Reynolds. (A side note: Reynolds himself was cast to play George Spahn, the owner of a movie ranch used by the Manson cult as a hideout. Bruce Dern took the role after the Smokey and the Bandit star’s death.)

All the actors, in roles large and small, bring their A games to the film. Two hours and 40 minutes can feel long for some. I wouldn’t change a frame. Tarantino laughs at a lot of things in his movies, especially his own leap through genres in films as diverse as Pulp Fiction, Reservoir Dogs and both volumes of Kill Bill. But not for a minute does he fake his love for the Hollywood of the late Sixties. With the help of master cinematographer Robert Richardson, costume designer Arianne Phillips, and editor Fred Raskin, the period of backlot Hollywood is painstakingly recaptured. You can feel Tarantino’s mad love for movies in all their disreputable dazzle and subversive art in every shot.

This doesn’t mean that violence is absent. The Manson era is just one reflection of the rise of American bloodlust. It’s one of the Manson girls, Pussycat (Margaret Qualley), who gets Cliff to give her a ride to the Spahn ranch, where helter-skelter reigns. And when the cult gets closer to home, no opportunity for splatter is spared.

What is most shocking about the film is its open heart toward innocence, Sharon in particular. Robbie plays her like a point of light undimmed by cynicism. She enters a theater to watch an audience watch her in a  Dean Martin spy caper and stays to revel in their joy. Rick feels nurtured in his art by a fellow thespian, who is blunt, honest, and only eight years old. As played by the mesmerizing Julia Butters, the kid is another source of incandescence in a film where Tarantino gives hope the last word.