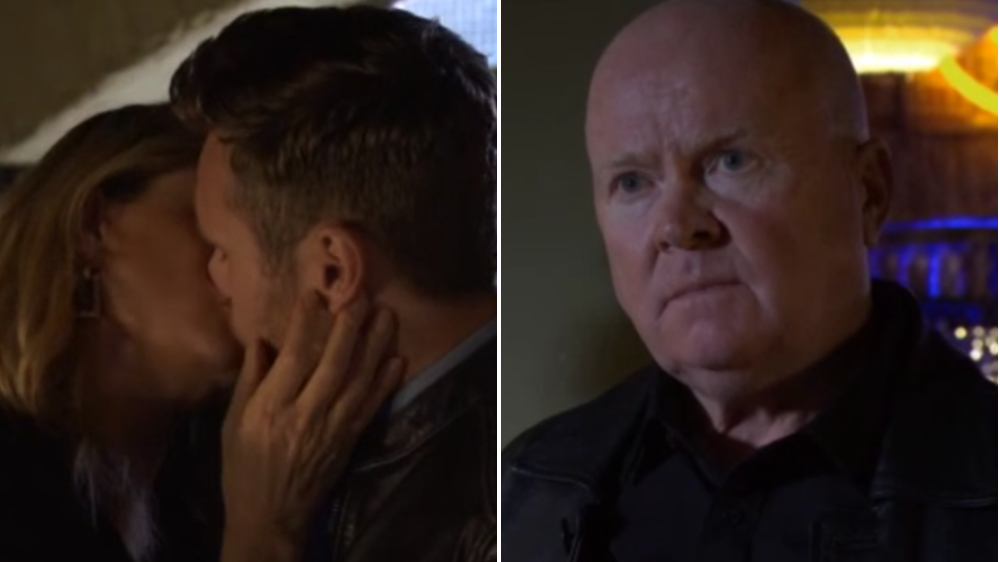 The angry nose breaths of Phil Mitchell (Steve McFadden) pretty much blew us through the walls – his rage couldn’t be clearer as he caught Sam (Kim Medcalf) snogging Keanu Taylor (Danny Walters) in EastEnders.

Keanu is pretty much trolling Phil at this stage – having already had sexual relationships with Sharon and Louise, he has found another Mitchell female to focus his attentions on.

The passionate fling began when they chanced upon one another in Spain, and tonight tensions between Sam and Keanu led to a kiss.

Only for Phil to walk in, and look murderous and wish he had a baseball bat to hand.

Phil is tolerating Keanu, as he is using him to try and catch a confession from obsessed copper DCI Keeble (Alison Newman).

So that he can have un-Phil-disrupting access to his kids Albie and Peggy, Keanu is helping his nemesis nail the vengeful detective.

Sam is a little bit confused over what Phil is doing cosying up to his enemy, and so she followed Keanu and thought she’d hit the jackpot when she caught him chatting with Keeble.

When she returned to snitch to Phil, she was confused by his reaction, deducing that it wasn’t news to him.

Later, Sam lured Keanu to Peggy’s, and turned on the full flirt charm, reflecting on their electric chemistry.

Before long they were in a romantic embrace, just in time for Phil to stomp in.

But how explosively will he react to what he has walked in to?

And will the plan with Keanu and Keeble be in tatters?