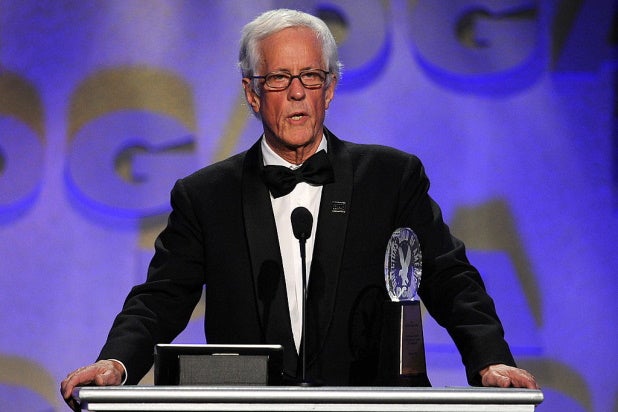 Michael Apted, the director of the “Up” series of documentary films and “Coal Miner’s Daughter,” has died. He was 79.

Apted’s passed away Thursday night as confirmed in a statement by the Director’s Guild of America. No cause of death was immediately given.

Apted also directed the James Bond film “The World Is Not Enough” and episodes of “Masters of Sex,” “Ray Donovan” and “Rome.”

“Our hearts are heavy today as we mourn the passing of esteemed director, longtime DGA leader and my friend Michael Apted. His legacy will be forever woven into the fabric of cinema and our Guild. A fearless visionary as a director and unparalleled Guild leader, Michael saw the trajectory of things when others didn’t, and we were all the beneficiaries of his wisdom and lifelong dedication,” DGA president Thomas Schlamme said in a statement.

Apted’s landmark series of “Up” documentary films date back to 1963 when he directed an episode of “World Plus Action” that sought to profile a group of British children, all 7 years old and all from different backgrounds, and he then revisited those same children seven years later in “7 Plus Seven” in 1970 to see how they had changed. Apted continued those films every seven years even as others declined to participate or at least one participant passed away. And his final film from 2019 was “63 Up,” which caught up with the individuals again as they are now all 63. Roger Ebert had referred to the series as among the greatest films ever made, and the films in many ways pre-dated reality television for how people could become obsessed with ordinary people.

Apted’s other documentary films for which he earned acclaim throughout his career included “Incident at Oglala,” “Bring on the Night,” “Moving the Mountain,” “Me and Isaac Newton” and “Power of the Game.”

He also had a background in narrative feature films and in television. He directed an installment in both the James Bond and Chronicles of Narnia franchises, and he received a DGA Award for “Coal Miner’s Daughter” in 1980.

Apted also had a long history with the DGA dating back to 1978 and served as DGA president between 2003-2009, the longest stint for any DGA president since George Sidney in the 1960s. He successfully negotiated health benefits and established jurisdiction and compensation rules and formulas for new types of media and as audiences moved online to streaming. He also served on the DGA Negotiating Committee and continued to serve as secretary-treasurer for the National Board through 2019.

In 2018, Apted was the recipient of the DGA Honorary Life Member Award in recognition of leadership in the industry, contribution to the Guild and the profession of directing, and outstanding career achievement. In 2013, he received the DGA’s Robert B. Aldrich Award for extraordinary service to the Guild and its membership.

Apted was also made a Companion of the Order of Saint Michael and Saint George by Queen Elizabeth II for his contributions to the film and TV industries.

Other DGA leaders also paid their respects to Apted on Friday.

“Whether having the foresight as a young man to conceptualize the revolutionary documentary series ‘7 UP’ or helming large-scale features, whether negotiating directors’ rights throughout our industry’s digital revolution, or advocating for independent filmmakers and inclusion, Michael’s search for the truth and what’s right was evident in all that he endeavored,’ Schlamme continued. “With his steady hand, acerbic wit, and keen eye to the future, he has steered our Guild through times of great change, setting the path for our industry and benefiting thousands and thousands of us. He always generously extended a hand to those behind him and understood the importance of activating leadership in the next generation. What I thought was an innocent lunch with him twenty years ago turned into my lifelong commitment to this Guild, all thanks to his passion and belief in me. I, like so many others, will be forever grateful for his mentorship. Words can’t express how much he will be missed. Our hearts go out to his wife Paige, and his children Jim, John, and Lily.”

“I spent countless hours literally two feet from Michael and loved every minute of it. Apart from his own remarkable body of work, what he gave to the DGA can’t be measured; he put his entire BEING into the Guild, and inspired us all to follow his example. We were lucky to have him and to know him,” Steven Soderbergh said in a statement.

“Michael Apted was the definition of ‘mensch’ – like the wonderful director he was, you could always count on him to deliver a clear and well thought out point-of-view, usually leavened with a dollop of dry wit.  He was my trusted colleague at the DGA for over 30 years, and I was privileged to follow him as President of our great organization – his were huge shoes to fill.  I will miss him dearly,” Taylor Hackford said in a statement.

“Michael had a deep and profound impact on the Guild, and on me. His shrewdness in negotiations, how he energized the Guild’s efforts towards inclusion, and how he led the Guild with rapier wit and elegance inspired me and so many others to participate in leadership. He was my teacher, my mentor, my advisor, and my friend. We owe him so much – losing him leaves a hole in the Guild’s heart,” past DGA president Paris Barclay said in a statement.