BBC Breakfast saw Louise Minchin and Dan Walker at the helm for Tuesday’s instalment and today’s big topic remained the fiasco over this year’s A-level results. However, despite Mr Williamson offering up an apology, Minchin was not satisfied with what he had to say, noting it was “too late” after thousands of students had missed their university places.

Minchin asked Mr Williamson if he was planning on resigning, which he failed to answer multiple times throughout the interview.

However, Mr Williamson noted: “I’m incredibly sorry for the distress it’s caused for these youngsters.

“This is not something anybody wanted,” he added.

Minchin hit back: “It’s not just distress, it’s changing people’s lives and this has happened on your watch.” 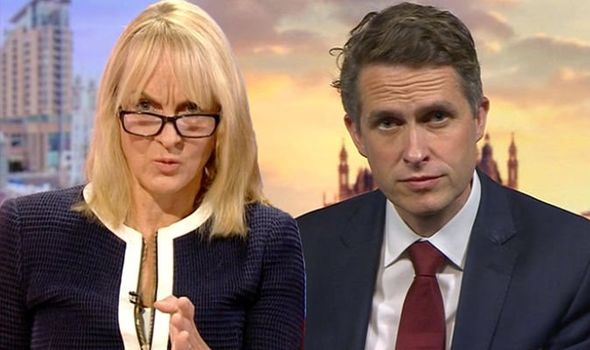 Those watching at home were not impressed with what Mr Williamson had to say, labelling him “pathetic.”

Another echoed: “Appropriate that Gavin Williamson has the demeanour of a naughty schoolboy on #BBCBreakfast. Attempting to spread the blame. It was them miss. Pathetic #ALevelResults.”