Home » TV & Movies » Legacies' Danielle Rose Russell Is Ready to Finally Vamp Out in Season 4: 'It's Happening at the Right Time'

If all goes according to plan this season, Hope Mikaelson will become the first TV character in history to be conceived on one show (The Vampire Diaries), born on a second (The Originals), then die on a third (Legacies).

And if you think Hope’s impending death is a spoiler, you probably shouldn’t look at Legacies‘ official Season 4 poster, which puts the character’s face behind three giant words: “Hope. Must. Die.”

“I didn’t have any idea that they were going to make that the poster until [showrunner Brett Matthews] sent it to me,” Danielle Rose Russell (aka Hope) tells TVLine. “I was shocked. It’s an amazing poster. Even if I didn’t know what was going on with Hope or the show, I would still watch this season just because of that badass poster.”

Of course, Hope’s yellow eyes on the poster serve as a reminder that death is only the beginning for Legacies‘ leading lady, whose dormant vampire side will become activated when she takes her final breath — a messy but necessary step in defeating Malivore once and for all.

And Hope’s evolution into a full-blown tribrid isn’t just something we’ve anticipated since Legacies premiered three years ago. This is a waiting game fans have been playing since Hayley (RIP!) found out that she and Klaus (RIP!) were expecting a baby during The Originals‘ backdoor pilot on The Vampire Diaries.

“There are producers and directors who have been involved [with this franchise] since The Vampire Diaries, and we’ve been talking about how we’ve been building up to this for seven or eight years, back when Hope was just a concept,” Russell says. “I don’t think anybody expected it to actually get this far, but here we are. It really does feel like I’m stepping into this character’s legacy.” 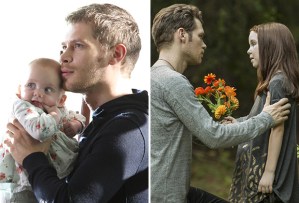 Russell recalls sitting down with Matthews when the show first began to discuss Hope’s trajectory, including how her becoming a tribrid “was something that did need to happen eventually,” she says. “We predicted that she would have to face that decision around Season 3 or 4, so it’s happening at the right time. I started playing Hope when I was 17, and now I’m going to be 22, so she really has grown up with me.”

Then again, being a vampire is a lot easier these days than it was back when Stefan Salvatore was walking the streets of Mystic Falls. “The nice thing is that we do [all of the vampire effects] through VFX now,” Russell says. “No more contact lenses, no fake teeth — it’s pretty great.” (No one tell Paul Wesley!)

Still, Russell knows that there will be a bit of a learning curve, should Hope actually become a tribrid. “I’ve been mostly a witch on the show, and it’s very easy to just hold your hand up and say a spell,” she says. “It’s very different — and a bit more intimidating — to have to suck on someone’s neck.”

And if any undead faces from Hope’s past want to drop by the Salvatore School to help show her the ways of the vamp, just say the word. “I’d love to have anyone who wants to come,” Russell says. “It’s always so fun for me to revisit Hope’s roots.”

Legacies returns Thursday, Oct. 14 at 9/8c on The CW. What are your hopes for Season 4? Drop ’em in a comment below.