Law & Order: SVU wouldn’t be the same without the unique relationship between Dominick “Sonny” Carisi, Jr. (Peter Scanavino) and Detective Amanda Rollins (Kelli Giddish). Fans have a lot of feelings about their friendship that could maybe one day be more. The actors spoke on the podcast Squadroom about the situation.

Kelli Giddish and Peter Scanavino talk about their characters 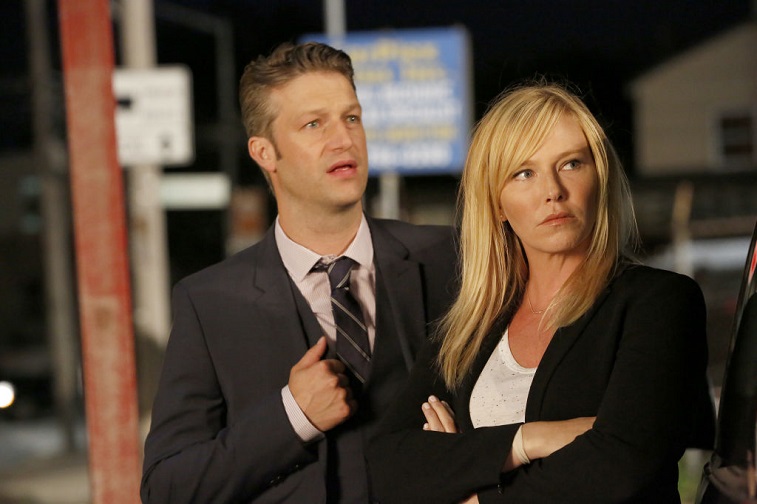 Scanavino spoke about how he approaches reading the scriptwhen scenes involve his character and Rollins. The relationship is more than alittle “complicated” and it’s even more so because fans want them to gettogether so badly.

“This relationship that they have is complicated,” Scanavino says. “It’s kind of ambiguous as to what the meanings are but it’s clear that it’s not just like, ‘Oh we’re buddies,’ or in passing but it’s not necessarily the other thing.”

The host asked Scanavino if he thinks about the fans andwhat they want, since many viewers of the series are hoping for Rollins andCarisi to finally get together at some point. The chemistry is obviously thereand fans are ready to see things head that way.

“Well I think there’s some things like let’s say it didhappen, then you instantly lose the mystery of it,” Scanavino continued. “Orthe tension of it, then there becomes another tension…and I think that’s a lotless interesting. A lot of the whole Rollins/Carisi thing, it’s not because we’vehad a ton of scenes to where we’re like dealing with it. I think it’s a lot of peopleinferring and reading between the lines of what’s not said and I think that’swhat’s really cool and it makes it deeper and more meaningful.”

Giddish seems to agree with Scanavino when it comes to how she portrays the relationship on camera. She says they “respect” the situation, especially with how fans feel about it. They’re hoping for a Rollisi romance sometime soon.

“I know from myself and I can probably speak for you as wellwe just kind of respect it, the relationship,” Giddish says about the situation.“So for us to say are they or aren’t they, it’s interesting but we respect what’sgoing on and sometimes I think the writers respond to what they’re inferringand what they’re seeing on an unspoken basis between mine and Peter’scharacters on the screen. And like when Rollins has important moments there’sCarisi, and so they give us these opportunities.”

Fans of SVU are really on board for a Rollins and Carisi relationship. Viewers on multiple social media platforms are calling for the two to get together at last. The situation can’t be resolved fast enough for eager fans.

“Can Rollins and Carisi just happen already?” a Reddituser asked.

Other fans seem to agree and would like to see Rollisifinally happen. Carisi has quite a lot of fans online. “Ugh yes! Carisideserves someone asap,” someone else agreed.

Fans are hoping that Rollins and Carisi will finally gettogether at some point in the series.