Refresh for updates: Tension between Thursday night’s presidential town halls continues to unfold as hoards of Twitter users are calling to boycott NBC’s coverage of President Donald Trump in favor of ABC’s Joe Biden event. Outrage sparked as NBC announced that its town hall will air at the same time and date as ABC’s. Upset with the competing coverage, notable figures from entertainment, have stood in solidarity against the NBC special and have urged their followers to do the same.

“I’m blacking out NBC and MSNBC today! This does not support democracy, this supports a sideshow,” Wanda Sykes wrote on Twitter.

Skyes also joined Julia Louis-Dreyfus in voicing their support for the anti-NBC strike. Louis-Dreyfus starred in Seinfeld, which originally aired on NBC.

The Veep actress shared her stance on the network debacle with a simple tweet: “#NBCBlackout.”

“[Every] TV in my house will be tuned into the Biden town hall,” tweeted Patricia Arquette.

Also voicing her stance was This Is Us actress Mandy Moore. The NBC star said that she’s proud of her co-stars for criticizing the network on its choice to air Trump’s town hall. She also added that she will be watching the former Vice President on ABC tonight.

While a handful of stars just used words and hashtags to express their dismay at the situation and support Biden, Jim Carrey took it to another level.

Carrey, who impersonates the Democratic presidential candidate on Saturday Night Live (which airs on NBC), warned his viewers that their time may be better spent watching ABC with an original drawing of Biden.

“There is a black hole on @NBC tonight. Tune in to @ABC at 8pm and watch a decent man deliver a safe way forward for this country,” he tweeted. “You can see the raging howler monkey-in-chief’s delusional and steroid fueled fails later on YouTube and, of course, all white supremacist websites.” 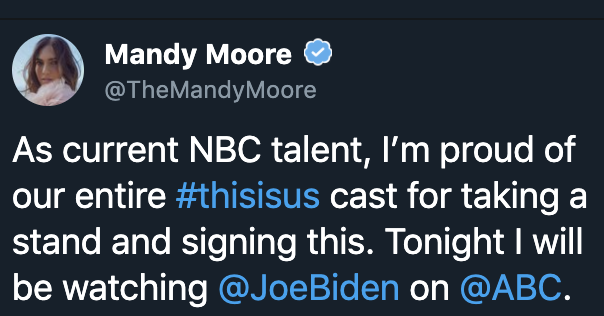