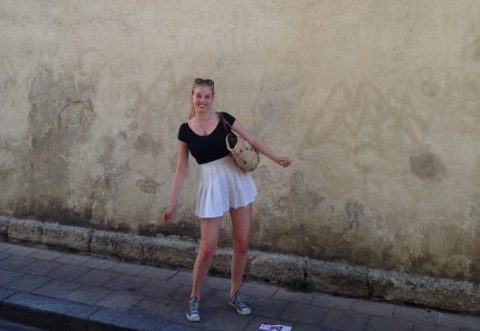 I had no idea what upskirting was when I was five, but I did realise that I didn’t like it when the boys in the playground would joke about being able to see up my skirt as I was on the climbing frame.

The most logical option to my young brain was to just sit this particular playtime activity out going forward.

But that feeling – of being vulnerable to boys spying my underwear – never left me.

While I wasn’t at risk of someone taking a picture up my skirt without my consent – the crime of upskirting – back then (potentially because it was before mobile phones had cameras and children weren’t given a Nokia brick until secondary school), I am more than aware of what faces women and girls today.

Whether I’ll be at risk of creeping eyes – or hands, to mention a separate issue – crosses my mind whenever I put on a dress or skirt that sits above the knee. It may result in me changing in my outfit, or putting on shorts underneath, but you will never catch me leaving the house without some sort of ‘protection’.

Nearly 50 men were prosecuted for 128 offences of upskirting between April 2020 and June 2021. It may sound like a low number, but it was more than double the count from the previous year – when the act was made a crime – and a third of offenders have also committed other sexual crimes.

Shockingly, the youngest victim on record was only seven.

Why should women have to change how they live their lives to stop falling victims to sexual offences?

So while the number of these crimes may be dismissed by some, it’s worth considering that not only have we been locked in our house for much of the past two years, preventing as many opportunities for this type of assault to occur (I suppose that’s one silver lining), the offence itself is very new and so of course convictions will be low until more victims are aware that they can and should report.

But also, as we see in this week’s Coronation Street, it’s not always easy for women and girls to come forward to the police about harassment.

Summer Spellman (Harriet Bibby) has been the victim of upskirting at the hands of another pupil at school, Max Turner (Paddy Bever). After finding out, she feels embarrassed that this has happened to her and turns to her eating disorder for comfort.

Luckily, Summer has great friends in Amy Barlow (Elle Mulvaney) and Asha Alahan (Tanisha Gorey) who offer her emotional support, with Amy spray painting ‘stop protecting sex offenders’ onto the side of the school building. However, it is Amy who is landed with a suspension, rather than the sex pest.

Summer then uploads an open letter to Instagram about her experience, which we will see go viral and lead to a meeting with deputy head teacher, Mrs Crawshaw. Unfortunately, the onus is put on girls to protect themselves by, you guessed it, wearing shorts under their skirts.

While no one told me to implement that technique myself, I truly believed that it was a problem for me to solve, rather than complaining to teachers or trying to get boys to change their behaviour.

It’s clear I knew it wasn’t right though. When getting dressed at friends’ houses, they’d ask why I was putting shorts on and instead of telling them the truth, I had a handful of excuses at the ready.

I’d say things like, ‘Oh my periods are heavy, so I do it to avoid leaking’, ‘They help keep my tights up’, or my personal favourite, ‘I don’t like the way the bus seats feel against my butt without them’.

I even tried to have fun with the shorts. There were a solid few years that my go-to pair were bright red and covered in sequins. I like to think that if anyone had tried to upskirt me, they would have been in for a surprise.

But even this funny memory is tinged with huge sadness. Reflecting on it now makes me realise how truly upsetting it is that I’ve had to go to such lengths to feel ‘safe’ leaving the house.

Why should women have to change how they live their lives to stop falling victims to sexual offences? It’s a sentiment that is echoed in cases of more serious crimes like rape and murder, too.

I’m thankful for the work of campaigners like Gina Martin, who secured the introduction of upskirting laws following her own experience of it, for journalist Sophie Gallagher who works to raise awareness of the issue of cyber flashing, and for apps like Path, that plot a safer route home for women.

Yet the fact that they have to do this work is utterly depressing. It’s been said ad nauseum, but until boys and men stop putting women at risk of gender-based crimes, we won’t be safe.

It’s something that Coronation Street is addressing well, with offender Max set to evade a sex consent lesson, which he very clearly needs. This kind of education is fundamentally important if anything is ever going to change.

Because I don’t want another young girl to ever stop playing on climbing frames or change her behaviour out of discomfort and fear.