Good Morning Britain returned to ITV this morning with Piers Morgan and Susanna Reid back presenting. It wasn’t long before Piers went on a rant about the private christening of Archie Harrison Mountbatten-Windsor, which took place on Saturday.

It came as two official photographs were released by Prince Harry and Meghan Markle to the public, after they had decided to have a private ceremony with no press.

Piers slammed the Duke and Duchess of Sussex’s decision and suggested Meghan “go back to America” if she wanted to lead a private life.

However, those watching the popular TV show slammed the presenter for his opinion and insisted he is “obsessed” with the Duchess.

“If you want to be private, go back to America and live privately, it’s pretty straight forward.”

Interjecting, co-star Susanna defended: “They don’t have to go back to America by the way.”

“She does, she’s American!” The journalist argued.

Susanna reiterated: “They don’t have to go back. She’s [Meghan] married an Englishman!”

But Piers continued to rant: “She doesn’t want to be a British public figure in the Royal family, go back to America.”

“She wants to live here!” Susanna added but Piers argued: “It’s a joke.” 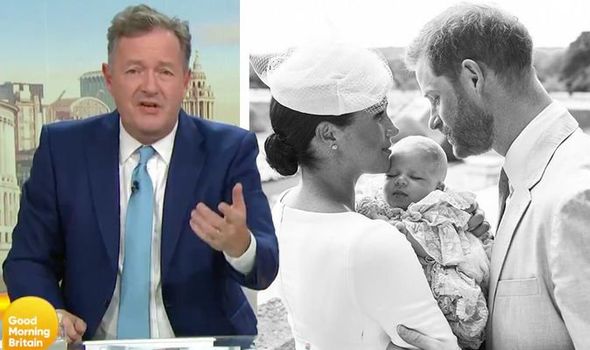 Taking to Twitter to discuss Piers’ tirade, viewers slammed the presenter over his furious tirade about Meghan and Prince Harry.

One viewer said: “He’s unhealthily obsessed about her. It’s off putting and not entertaining at all. #GMB.”

“He’s bloody obsessed with her!! @piersmorgan just leave her alone – YAWN #gmb,” someone else remarked.

A third added: “I’m so bored hearing about Meghan and Harry #gmb,” while another said: “It is so stressful to watching you in the morning @piersmorgan. This is your opinion but not everyone has to hear you go on and on. Just let it please go.”

While others agreed with the controversial presenter, with someone writing: “@gmb @piersmorgan I love Piers hahahaha awesome.” 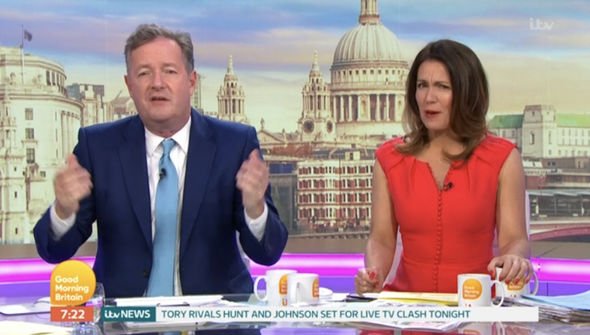 This morning, The Duke and Duchess of Sussex’s son, Archie Harrison Mountbatten-Windsor was christened in the Private Chapel at Windsor Castle at an intimate service officiated by the Archbishop of Canterbury, Justin Welby. The Duke and Duchess of Sussex are so happy to share the joy of this day with members of the public who have been incredibly supportive since the birth of their son. They thank you for your kindness in welcoming their first born and celebrating this special moment. Their Royal Highnesses feel fortunate to have enjoyed this day with family and the godparents of Archie. Their son, Archie, was baptised wearing the handmade replica of the royal christening gown which has been worn by royal infants for the last 11 years. The original Royal Christening Robe, made of fine Honiton lace lined with white satin, was commissioned by Queen Victoria in 1841 and first worn by her eldest daughter. It was subsequently worn for generations of Royal christenings, including The Queen, her children and her grandchildren until 2004, when The Queen commissioned this handmade replica, in order for the fragile historic outfit to be preserved, and for the tradition to continue. Photo credit: Chris Allerton ©️SussexRoyal

If you want to be private, go back to America.

It comes after Piers was absent from yesterday’s edition of Good Morning Britain.

ITV viewers tuned in to see Susanna joined by Richard Bacon instead.

Alongside a change to the hosting line-up, the showbiz segment was also delivered by someone else.

Richard Arnold was replaced by none other than Peter Andre to deliver the latest entertainment news.

Good Morning Britain airs weekdays at 6.30am on ITV.