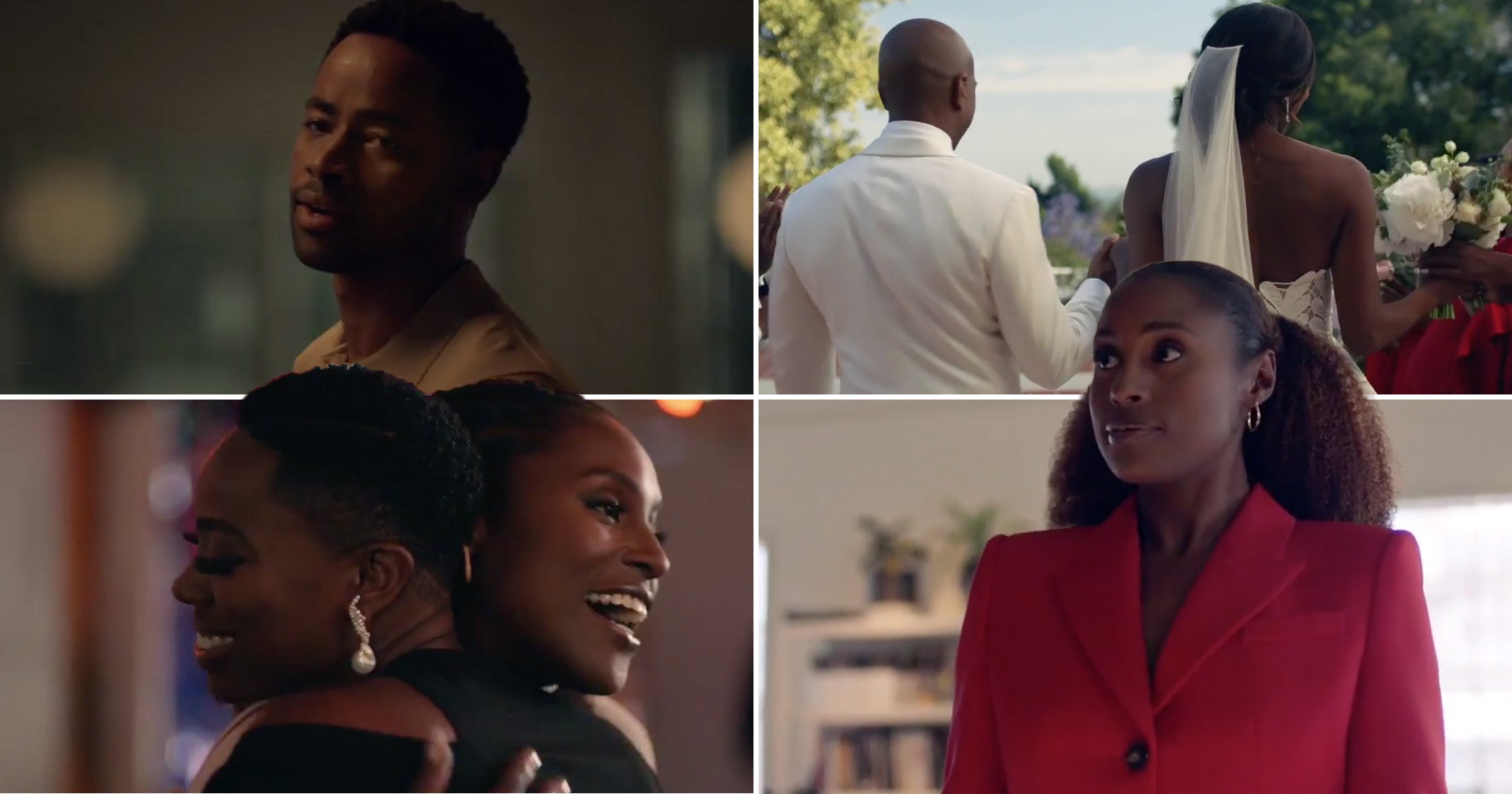 The comedy drama has been a hit with audiences in the black community and beyond over the last five years, and some can’t believe Issa’s story has come to an end in an episode filled with birthdays, time jumps, and one big celebration.

Issa told Metro.co.uk that devoted viewers may not be ‘satisfied’ with the show’s ending and hinted at steering clear of Twitter once the final episode makes its debut.

When asked whether fans will be happy with the series finale, the Awkward Black Girl star replied: ‘Of course not! Absolutely not.

‘This is an ending that I’m personally happy with, but I have no doubt in my mind that people will have lots to say about it.’

Well, the day has finally come, and here’s a breakdown of what happened.

What happened at the end of Insecure season 5?

Issa and Lawrence get back together

Earlier in the series, Issa and Lawrence called it quits (again) after Condola Hayes (Christina Elmore) announced she was pregnant with Lawrence’s child at the end of season four.

Although Issa tried her hardest to move past the shock, episode one of season five saw the leading lady break up with him, and enter a relationship with Nathan Campbell (Kendrick Sampson).

There was an amicable silence between the former lovers for months, however, the Issa, Lawrence, and Nathan love triangle came into full force at Tiff and Derek’s barbeque in episode nine, titled Out Okay.

Lawrence professed his feelings for Issa but was unaware Nathan had heard their intimate conversation. After an intense showdown, Nathan brands his and Issa’s ‘relationship’ as ‘toxic’ which left Issa having to decide who she wants to be with.

However, after seeing all her friends blossom in their relationship, Issa decides to take a risk and get back together with Lawrence.

Fast forward a year later, and Issa, Lawrence, and his son Elijah are laughing and joking in the kitchen, and Issa goes to the toilet and smiles at herself in the mirror… for the last time.

Molly and Taurean get married

Molly finally got her happy ending as the episode concluded with her marrying her co-worker Taurean Jackson (Leonard Robinson).

The final scene opened up with a couple coming out of a church, and at first glance, fans will think, ‘Issa and Lawrence, no way,’ but it was in fact Molly and Taurean’s big day, with Issa and the bridesmaids dressed in red.

Season five episode one saw a deflated Molly attempt to get back into the dating game, and the two loving lawyers decided to stop talking about business for a minute and actually take the time to get to know one another.

Fans were a little unsure at how the budding romance would play out, but their undeniable chemistry won them over.

Speaking to TVLine, Robinson said: ‘I knew Yvonne before Insecure, through our stand-up comedy careers.

‘So there was already a connection because she’s so cool. I’m not going to lie, there was a cynic inside of me that thought a Molly and Taurean romance could never happen. But I’m glad I was wrong.’

The final episode was filled with several heartwarming moments, but the death of Molly’s mother Carol Carter brought a tear to the eye.

Episode five, titled Surviving Okay, saw the entire Carter family at the hospital, and after a doctor mistook a dead elderly woman for their beloved Carol, fans knew they were in for a turbulent watch.

Another doctor later breaks the news that there was major damage from the stroke she suffered, and there was a possibility Mrs. Carter would be paralysed.

But in episode 10, while her spirits were up, Molly receives a call from her brother Curtis, and tells her the heartbreaking news, and later breaks down in Issa’s arms

Will there be a season 6?

Sadly not. It truly is the end of an era!

Rae addressed the show’s ending to Deadline and expressed her gratitude to HBO for believing in her vision for the show.

‘We always planned to tell this story through five seasons, but we couldn’t have made it this far without the tremendous support of our audience.

‘I feel blessed beyond measure to bring our characters’ stories to an end, on-screen at least.’

Insecure season 5 is now streaming on Sky Comedy with the final episode airing on 28th December at 9pm.