Home » If You're Wondering How You Can Watch 'A Quiet Place, Part II', Here's the Deal

Sound the (silent) alarms, everyone. After a year of wondering what the heck is going on with A Quiet Place Part II, someone in the film heavens decided to give us a chance to finally see the movie. Come May 28, fans of the Abbott family will finally learn exactly what happened to them… and probably ask themselves a lot of questions along the way.

Before we go any further, we need to give ourselves a quick little recap on what exactly happened in the first film. John Krasinski and Emily Blunt play a couple trying to keep their family from being killed by blind monsters. Oh, and if the title of the franchise doesn’t clue you in, these predators have an acute sense of hearing, so the only thing the humans can do is be silent throughout the movie.

Clearly I wasn’t the only one who loved the film when it first came out, because it quickly garnered critical acclaim and became one of the top films of 2018.

A post shared by A Quiet Place Part II (@aquietplacemovie)

Back to the present. Now, if you can remember all the way back to the prehistoric days of March 2020, there was actually a lot of drama attached to the movie… probably because it was the last in-person premiere before the world literally imploded and it was dangerous to go anywhere. But in between then and now, we’ve been waiting to hear exactly how the movie would be distributed. After all, we’re all pretty accustomed to watching the latest movies from the comfort of our own homes, so it only makes sense we’ll still have that luxury… right?

Well, not exactly. We have the deets on how you can see A Quiet Place Part II—and when you’ll have access to it at home. 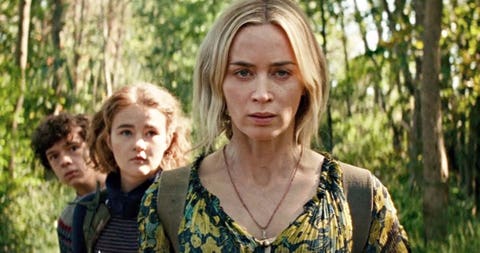 How can I see A Quiet Place Part II?

PSA to all fully vaxxed people: you’re gonna want to hear this one. The movie is actually debuting in theaters first. What better way to celebrate your Memorial Day weekend than by grabbing some other vaxxed peeps and taking an inaugural trip to the movies for the first time in over a year?

That’s amazing. But what if I want to see the movie at home?

Sooo…here’s the bad news. Due to COVID restrictions easing around the country, it’s gonna be a little bit before you can actually see the movie at home. Don’t panic, though. After 45 days of being in theaters, A Quiet Place Part II will be available for streaming on Paramount Plus. So expect the movie to debut on the streaming site around July 4.

And if you don’t have an account yet, it’s only $5.99 a month, and you’ll be able to stream a ton of other content once you’re done. Or you can just watch the movie again. Whatever works for you.

GET PARAMOUNT PLUS NOW