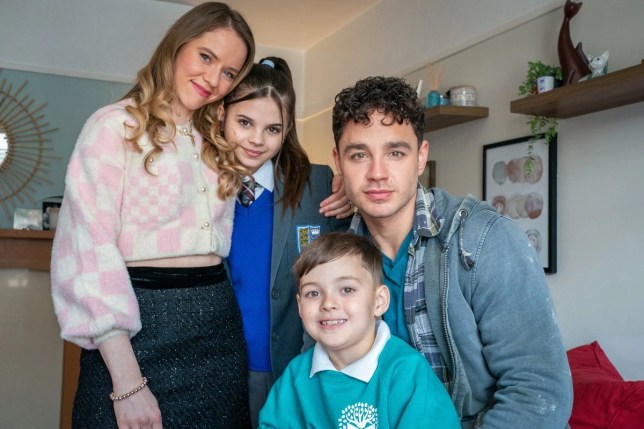 Waterloo Road certainly returned with a bang after seven years away, as original character Chlo Charles (Katie Griffiths) died in a twist that no-one saw coming.

Viewers had been delighted to find out that Chlo and her husband Donte (Adam Thomas) would be reprising their roles, but their happy family, including kids Izzie) (played by Adam’s niece Scarlett) and Tommy (Adam’s son Teddy) has been torn apart.

The storyline kicked off during a fierce protest at the school, which was currently named after a racist figure from history.

The students were campaigning for this to change as headteacher Kim Campbell (Angela Griffin) fought to take charge.

As paint bombs were thrown, one landed on the windscreen of English teacher Coral Walker (Rachel Leskovac).

An incident of rage saw her propel her car, bumping the one ahead which hit Chlo and sent her to the ground.

Chlo was treated at the school with an injured wrist, but she swore she was feeling okay.

Her main mission was trying to sell a project to Kim, but the head wasn’t so sure, and was distracted by the chaos of what had happened in the protest.

At home, Chlo and Donte were as fiercely in love as we remember, as they headed upstairs for an afternoon of passion.

In the evening, the family sat down to dinner, with Chlo enthusing that she wanted to embark on a career as a teaching assistant.

But her dreams for the future were cut short, as she suddenly collapsed to the ground due to a head injury.

At the hospital, Donte was given the shattering news that his wife hadn’t made it, and he held his children close, knowing life would never be the same again.

The devastating twist is one which will come as a shock to viewers, who assumed that Katie was back in the role long term.

The aftermath will hit Donte hard, with Izzie struggling to help her grieving dad past this.

We know that he will eventually take on the role of caretaker at the school, but there may be unfinished business with Coral.

Will he discover her involvement in the accident – and how will he react?

Waterloo Road continues every Tuesday at 8pm on BBC One, but all seven episodes are available to binge on BBC iPlayer.