“I gave them the address, I said where we were, where they can meet us, and that was that,” said Sean Middletown, director of sales. 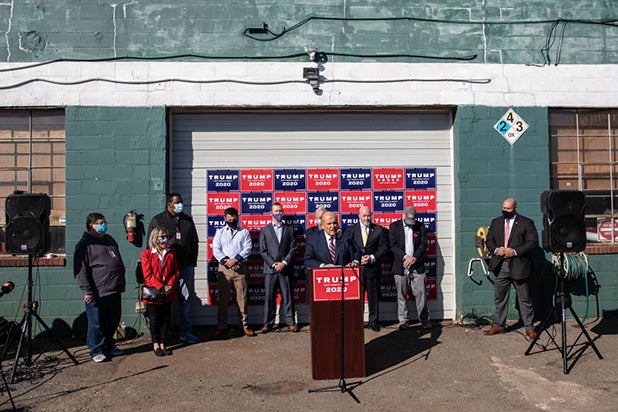 When it comes to the top ten things we’ll remember about 2020, our lists will likely include Zoom, COVID, the election, and a press conference at Four Seasons Total Landscaping. If you didn’t think you’d put that last one on your list, don’t worry — the owners of the now-famous building didn’t either.

In an interview with the Inquirer, Marie Siravno spoke out about the surprising and massive way her small landscaping company has now integrated itself into not just pop culture life, but every day life. Who would have ever thought there would be Zoom backgrounds, t-shirts worn by celebrities, Wikipedia pages, and drive-by photoshoots of a tiny business that probably wouldn’t have seen any notoriety otherwise? Not Siravno, who insisted to the Inquirer that “we’re not making any political statements. We’re running with this and enjoying it. … It’s like a magic carpet ride.”

Sirvano’s wholesome take on the press conference and what came after is fun to read about, but the real meat of this interview is in the details. For the first time, we have legitimate info on how the press conference actually came to be and how it went down. And while we all love our theories of the Trump campaign thinking they were being conned into an event at a Four Seasons hotel, maybe the real story is even better. The Trump team chose the small family-owned business. Willingly and knowingly. According to the interview, on the Saturday morning of election week, Sean Middletown–the director of sales for the business–received a call from a Trump campaign staffer who was “surveying areas along the I-95 corridor, asking if the company would be willing to host a news conference.”

But sometimes, you can’t plan for greatness. Sometimes, greatness presents itself in the strangest of ways, like in the form of a small, family-owned landscaping business. In a year filled with random little joys, we’re happy to have this as one of them.