Still digesting Gossip Girl‘s chaotic Thanksgiving episode? We hope you saved room for leftovers, or at least one more scoop.

In addition to the many secrets spilled out at the dinner table, from Aki and Audrey’s fling with Max, to Julien and Obie’s own deception at Zoya’s expense, Episode 7 also wrapped up one of the show’s more divisive storylines.

Upon receiving Max’s confession and returning control of Gossip Girl to Kate and Jordan, Rafa (Jason Gotay) revealed that he quit his job after realizing he was doing more harm than good. 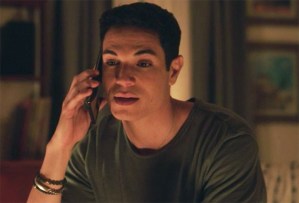 “I wanted revenge on him,” Rafa said of Max. “A student. A 17-year-old kid. When you sent that, it became clear. I needed him to want me. Because when he did, I didn’t have to face what I was doing. … What you’re doing to those kids, I read the DMs that came in all day, each one more vicious than the next. They’re turning against each other. … You’re not making them better, Kate. Be careful. You’ve read enough to know this doesn’t end well for anyone, especially you.”

But is this really the last we’ll see of Rafa? The answer, at least in Season 1, is yes.

“What he did is still totally awful, so we’re giving a clean send-off to a person who’s done an awful thing,” showrunner Joshua Safran tells TVLine. “But the reason for that is Rafa still has some humanity in him. He’s able to recognize the awful thing he did. So, yes, Rafa is gone. That storyline is over. But of course it will resonate inside Max forever.”

Your thoughts on Rafa’s redemptive departure? Drop ’em in a comment below.