Top Gun: Maverick finds Pete “Maverick” Mitchell (Tom Cruise) pushing the boundaries of some of the Navy’s top aviators around. They will need to work together to succeed at the near-impossible mission put before them. However, they don’t all get along and must learn how to work together for the greater good.

Powell plays Hangman in Top Gun: Maverick, who views himself as a natural leader. However, he doesn’t ever work around his teammates. As a result, he’s in direct competition with Rooster (Miles Teller) for the spot of team leader on a mission that they may never return home from. 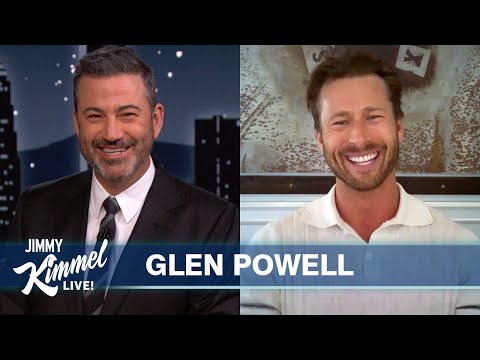 Jimmy Kimmel Live brought Powell onto the show to talk about his Top Gun: Maverick character, Hangman. Kimmel asked if it’s true that he got to choose his call sign, similar to how Teller did. However, Powell didn’t entirely come up with it on his own.

“Yeah, I got to pick Hangman,” Powell said. “When we originally went to the Navy, went to Fallon, Nevada, and hung with all the Navy people, my original call sign was Slayer.”

“So, I went down to North Island, hung with a bunch of naval aviators and I met this one guy whose call sign was Noose. I was like, ‘Hey, why do they call you Noose, man?’ He goes, ‘You know…’ Then, one of his buddies was like, ‘I’ll tell you why they call him Noose.’”

Powell explained: “Basically they said when he was in middle school, he was going to go to a school dance, he was really excited. There was this girl he really liked, but he was worried he was going to be too excited, so he ended up taking his shoelace and tying it around his thing around his leg. (Laughs). So, you take a shoelace, you tie it around your leg, not a great plan to start off with. It got stuck. His buddy had to cut him out, so he got the call sign Noose, and Noose became Hangman.”

Top Gun: Maverick introduces a whole team alongside Hangman. The various call signs include Rooster, Phoenix, Payback, Fanboy, Coyote, Bob, Cyclone, and of course, Maverick. Top Gun: Maverick brings a new crew for audiences to connect with, some of which call back to elements of the original cast.

They are the best jet pilots out there, but they will have to push far past their limits to succeed in this mission.