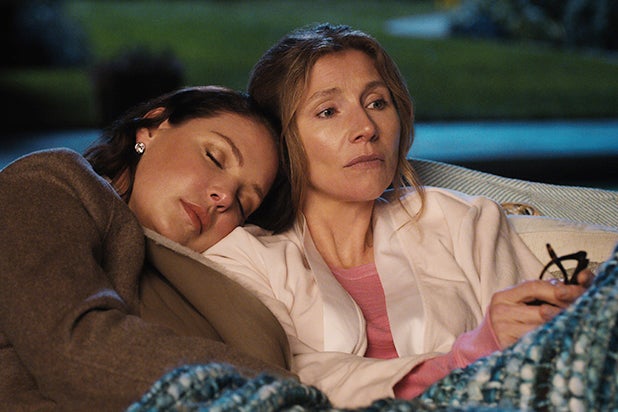 (Warning: This post contains spoilers for the Season 1 finale of Netflix’s “Firefly Lane” as well as the source novel by Kristin Hannah.)

Season 1 of Netflix’s new friendship drama “Firefly Lane” ends with a flashforward and a cliffhanger, leaving fans with a lot of unanswered questions about the relationship at the core of the show.

Without much in the way of explanation, the final moments of the season jump forward several years to the day of Kate’s (Sarah Chalke) father’s funeral (itself something of a season-long mystery with the identity of the deceased being withheld until the end) where it’s revealed that Kate and Tully (Katherine Heigl) are no longer friends. The duo, best friends through thick and thin since childhood, have apparently gone through something in those intervening years that was bad enough for them to call it quits.

“I don’t even know, to be 100% honest, what the actual last straw is,” Chalke said in an interview with TheWrap. “I know what it is in the book, but I don’t know if Maggie [Friedman, showrunner] will choose to use that or something else, if we’re lucky enough to get to continue for another season.”

In the source novel by Kristin Hannah, Kate’s falling-out with Tully stems from an ill-fated appearance on her friend’s talk show. Book Kate, like her show counterpart, has a strained relationship with her teenage daughter Marah (played in the series by Yael Yurman) and turns to Tully for help.

Tully invites Kate and Marah onto her daytime talk show to work through their issues on air, a move which, predictably, goes awry. The fallout from the segment is so immense that Kate and Tully go for years without speaking. It isn’t until Kate is diagnosed with breast cancer near the end of the novel that Tully re-enters her life. The pair reconcile and resume their best-friendship for the last few months until Kate’s death.

(Hannah released a sequel, “Fly Away,” in 2013, following Tully in the year’s after Kate’s death.)

As Chalke said, it’s unclear whether the show will follow through with the rest of the book’s plot, having already taken several liberties throughout the first season. The interwoven timelines, for one, are a departure from the novel.

“I’m so curious what it is,” Chalke said. “You see so many of the things that they get through. Their bond is so strong and they are so loyal to each other; it seems like they can overcome anything. I’m so curious to find out like, What is it? What is that one thing?”