Home » TV & Movies » Father of the Bride Review: This Time, When Dad Wants to Cancel the Wedding, He’s Right

Here’s a weird feeling: the sense that the eponymous father of the bride is right when it comes to his many trepidations about a would-be happy event that is about to consume his life, for better and very much for worse. Edward Streeter’s 1949 novel “Father of the Bride” inspired Vincente Minnelli’s 1950 Best Picture nominee and Charles Shyer’s sterling 1991 version (plus sequels and even a TV series), and now the story receives yet another reimagining, this time through the prism of a vibrant and complicated Cuban-American family led by Andy Garcia as the appropriately addled patriarch.

While many of the film’s beats are familiar, director Gary Alazraki’s version of this classic family comedy often misses one essential ingredient: real humor. Its heart is in the right place, but even its wackiest diversions — including “SNL” star Chloe Fineman trying to put her spin on Martin Short’s indelible wedding planner Franck, plus a fresh take on the two families at its center — fall short of previous versions, and find themselves awkwardly tucked beside far more serious subplots.

Garcia’s Billy Herrera often feels less nutty and far more pragmatic than his predecessors. It’s a solid performance, but the limitations of Matt Lopez’s script mean it’s not an amusing one, and that levity and lightness is missing from every inch of what should be a comedic slam-dunk. Billy is a dreamer and a hard worker, a bootstrapping immigrant who arrived in this country with nothing — one of his favorite pastimes is sharing increasingly embellished versions of his coming-to-America story — who has become so set in his ways that it’s alienated his beloved family. That includes his long-time wife Ingrid (Gloria Estefan), who is still hungry for new experiences, plus the pair’s two daughters, obvious favorite child Sofia (Adria Arjona) and her more offbeat little sister Cora (Isabel Merced).

In fact, when the film opens, Billy and Ingrid are close to divorce. That’s hardly a zippy, romantic kickoff for a story about the power of true love, but it does serve to further plague Billy. Ingrid wants out of marriage just as Sofia announces she wants in, having fallen head over heels for fellow lawyer Adan (Diego Boneta), who shares her dreams of moving to Mexico and working to help immigrants find the better life Billy carved out for himself long ago. But who exactly is Adan? When did Sofia fall for this dude? Why do they need to get married post-haste, throwing everyone in the family into disarray? Exactly how is Billy going to paper over his own personal drama as they all run toward the chapel of love?

We know this set-up, and we know its rife for comedy and fun, but there’s something decidedly darker about this entry. While the “Father of the Bride” films always followed the emotional arc of the eponymous dad, Alazraki’s take can never quite kick the odd sadness that opens it. Why wouldn’t Billy be opposed to a quickie marriage? 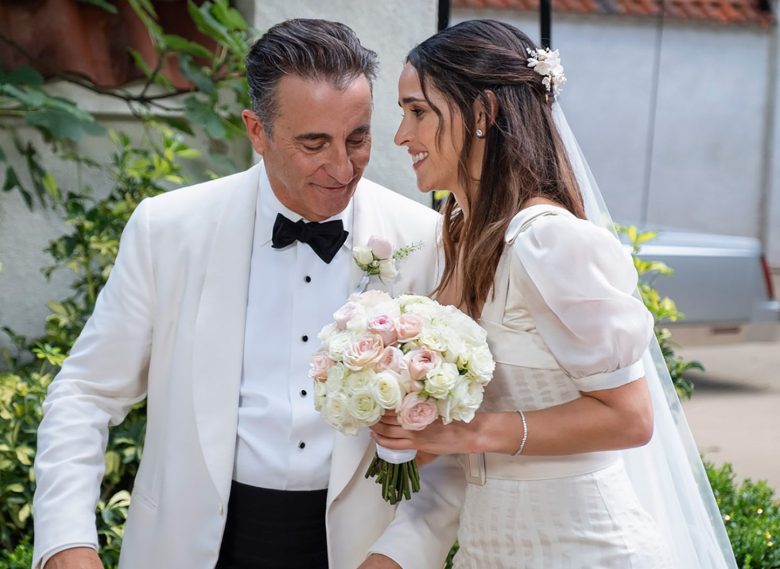 “Father of the Bride”

Things do get very silly: Fineman’s appearance as nutty wedding planner Natalie Vance provides some levity (her pronunciation of “Latinx” is instantly iconic), but she never reaches the dizzying highs of Short’s take on the well-meaning goof. Billy and Ingrid’s extended family provides some pop, though most of those characters remain one-note and are pushed aside to make room for Adan’s staggeringly wealthy (and amusingly out of touch) clan. A subplot about Cora’s struggles to break free of her sister’s shadow is picked up and dropped at random, and often feels like padding for a story that should already have plenty going on.

While the film is set in Miami, it was filmed in Atlanta. That Southern city is a fine stand-in for some sequences, but it rarely captures the vibrant locale it’s meant to mimic. Worse still are a handful of green-screened sequences that appear to have been shot on a dark set rather than a sun-drenched canal or a hopping party yacht. Eventually, we know, Sofia and Adan’s wedding will take place at the Herrera home (a staple of this franchise), but before we get there, the family is shunted to various locations that, again, only seem to pad the running time. (One exception is the demented mega-mansion Adan’s dad buys to host the overblown wedding of his dreams, which is destroyed in spectacularly Floridian fashion.)

Getting to that blessed event on the Herreras’ own property is the film’s heart-swelling raison d’être, but this “Father of the Bride” chugs toward it in increasingly addled style. The familial bonds are sweet and often amusing, but pointed bickering often rules the roost. Was Billy right to want to put the brakes on this particular event? For the first time in the storied history of this franchise, yes.

“Father of the Bride” starts streaming on HBO Max on Thursday, June 16.