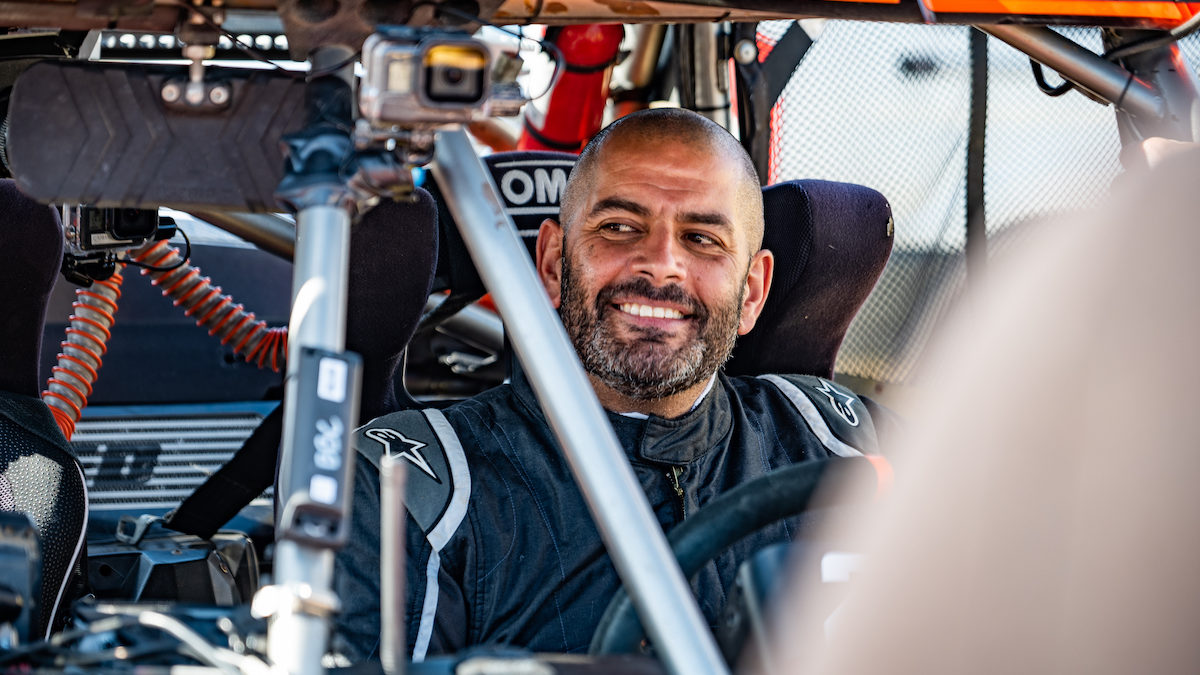 The new season of Top Gear premieres on BBC America this Sunday — and includes some of the most hair-raising stunts in the show’s 18-year history.

One of the most nail-biting moments sees host Freddie Flintoff strapped into a car then dangled off a 540-ft high dam by a crane, before both he and the vehicle BUNGEE jump off.

Watching on from the sidelines is his co-host Chris Harris, who almost seems more nervous than Flintoff himself.

In an exclusive interview with Monsters & Critics, Chris gave us the lowdown on just how he, Freddie, and fellow presenter Paddy McGuinness choose who has to carry out the show’s most terrifying stunts.

“The question I’m always asked is, ‘Did you and Paddy turn down the opportunity to do the bungee jump?’ Absolutely not,” he says. “I refused outright. There’s no point in even asking McGuinness because he’d just tell you to Foxtrot Oscar. I can tell you now that the only man stupid enough is Flintoff. So fair play to him.

“But that one was pretty simple. You look at the list of the three presenters, and there’s only one of you that’s going to do that, right? He is the most unflappable human being I’ve ever met in my life.” 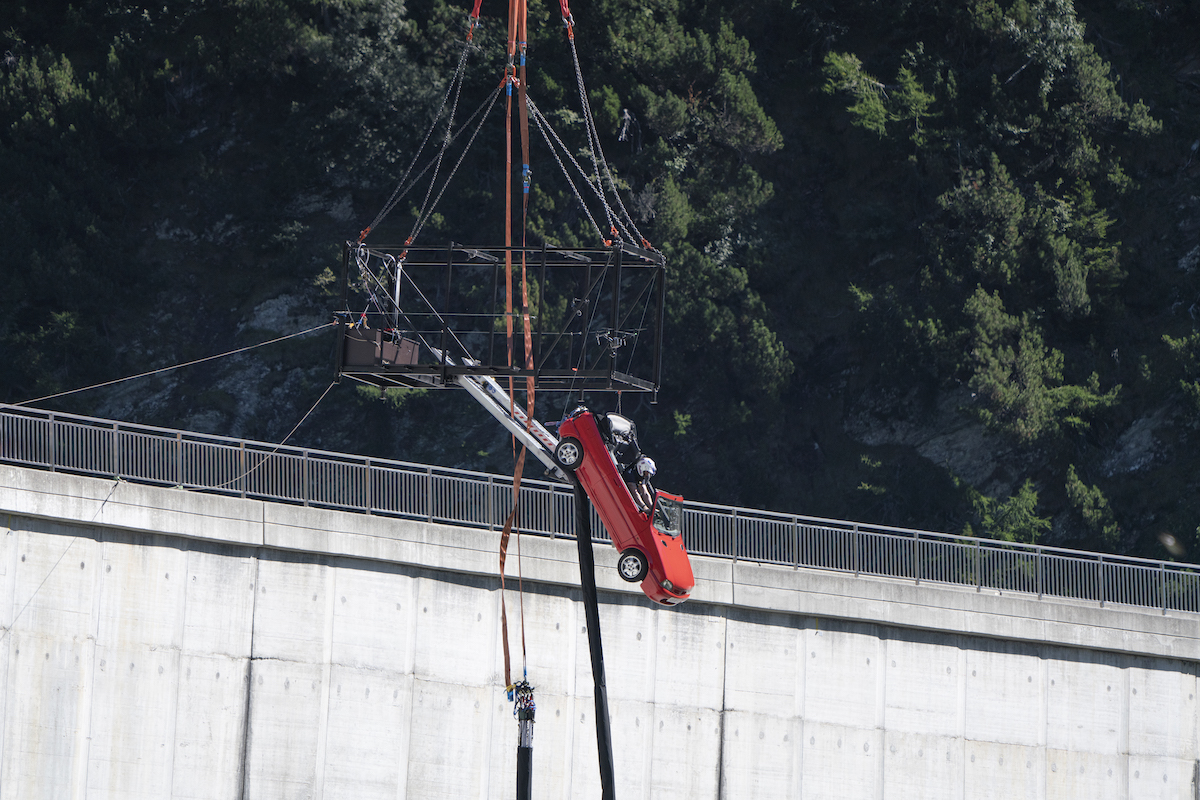 While he got out of having to do that one, the new season did leave Chris in some pretty alarming situations of his own — including on the season premiere, which features an epic road trip to Nepal and a journey along some of the world’s most dangerous mountain roads.

At one point, while being towed by Freddie up a track that looks like it’s about to collapse into the valley below, a visibly shaken Chris reveals that all he wants to do is call his family in case he doesn’t make it and plummets off the mile-high cliff.

Another scene sees the handbrake on his Renault 4 give way while he stands next to it and hurtles uncontrollably down the mountainside towards an unaware Paddy, who comes moments from meeting his maker.

“I don’t want to give away too much,” says Chris. “But let’s just say that really wasn’t staged. That wasn’t supposed to happen.

“The handbrake slipped off in a really, really bad place. What I did was I spent a bit of time in the mornings practicing how to get the hell away from [the car], if the handbrake went.

“It looked like I was doing pit stop practice for a race. Actually, I was just working out if… because if the handbrake goes, and it’s a left-hand drive, if you try and jump out, you’re either getting swept back with the vehicle by the door, or your leg can get caught on the actual handbrake and you’d end up going over the cliff.

“So, I would sort of be frantic trying to work out the egress possibilities in a Renault 4, to make sure I didn’t end up over a cliff.”

The situation could have easily ended worse for Paddy. “Yeah, I think it could have barrel rolled and done a right old ‘fling his body parts about effort’,” says Chris. “It didn’t, thank God. But that was a mega trip.”

The new season has everything Top Gear fans could want — from epic road trips like the Nepal special and another to Peru, as well as incredible cars and a whole bunch of racing thrown in, including one head-to-head between the remarkable McLaren Speedtail and an F35 fighter jet. 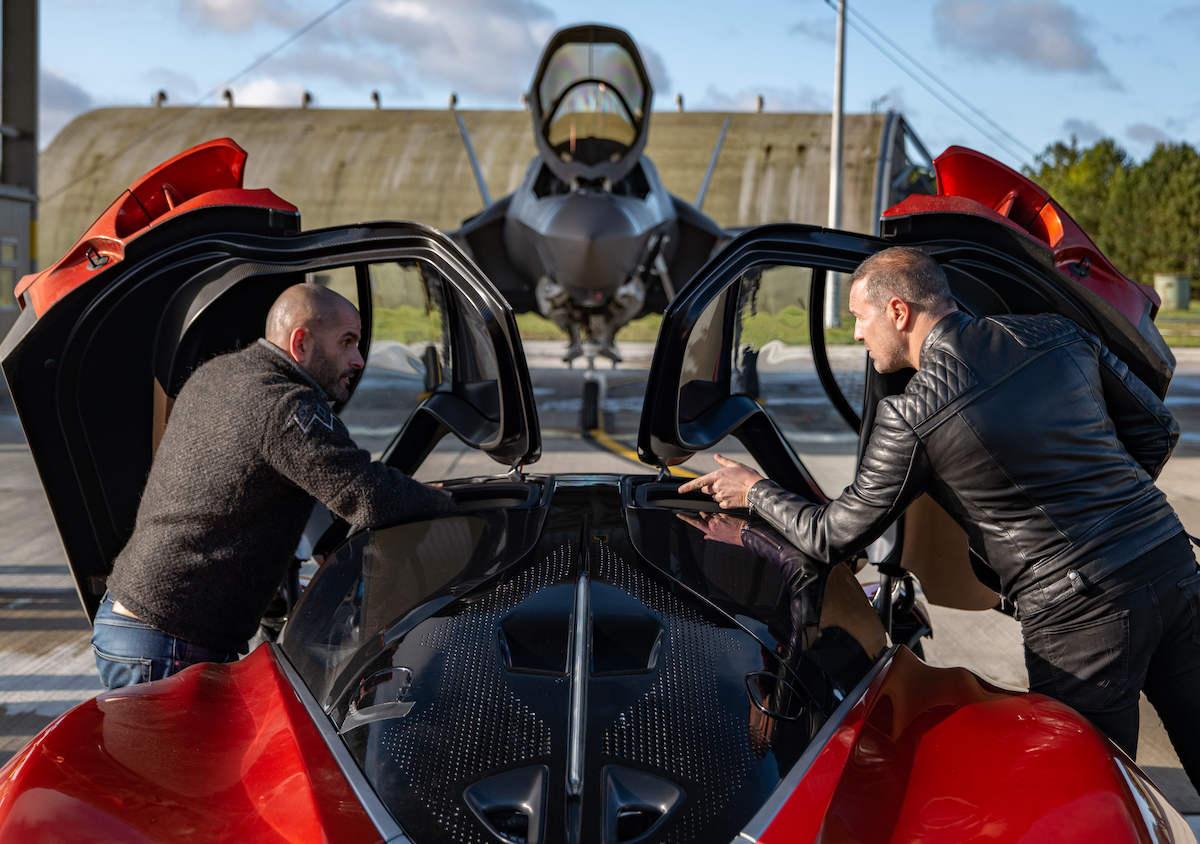 Chris says, “I think what I love about Top Gear is at the moment is we’ve got a great balance of… those films almost feel like a travel show where the cars are incidental, which… Top Gear should be like that — it should appeal to people who aren’t necessarily into cars.

“They should just see scenery and location and think, ‘God I want to watch this’ even though I don’t like cars. Then you bring it back and it was amazing to think that we spent a day with the RAF and their F35 fighter jets and a McLaren Speedtail. That’s vintage Top Gear.

“So, the bandwidth of the show is really good at the moment. And I think we… I’ve always felt, because I’ve been doing it a while now, that we’ve earned the right to cock about a bit more now.

“I think that at its heart it is a car show. But because I think we’ve got a real confidence about us, that we can go and be a bit stupid now and again.”

The natural on-screen chemistry between Chris, Paddy, and Freddie is clear to anyone watching, and the show feels like it’s truly found its way again.

“I think chemistry is a bit like brakes on a car,” says Chris. “People often say to me, are the brakes good on a fast car? And I always say to them, if you don’t think about the brakes, then they’re good. If you have no comments about the brakes, that means they’re brilliant.

“You should never think about brakes. Brakes should never be good or bad. They should just be so intuitive that you don’t think about them. And I think chemistry’s a bit like that. If you wake up and think that your chemistry is either really good or really bad, if you think it’s really good, you’re probably faking it.

“If it’s really bad, you got something to worry about. I don’t think about what we’re doing now. I just turn up, and I know it works. And that’s a great place to be on a TV show.

“You’re not even thinking about it. You know the banter; you know the roles you play within the show. You know what’s acceptable, what’s not acceptable. You can push the boundaries.

“They’ve become good friends of mine. I like them a lot. And good friends can be really cruel to each other and really mean, and I like that. But the meanness is different than the previous brand… It’s probably a little bit kinder, but it has its own flavor. 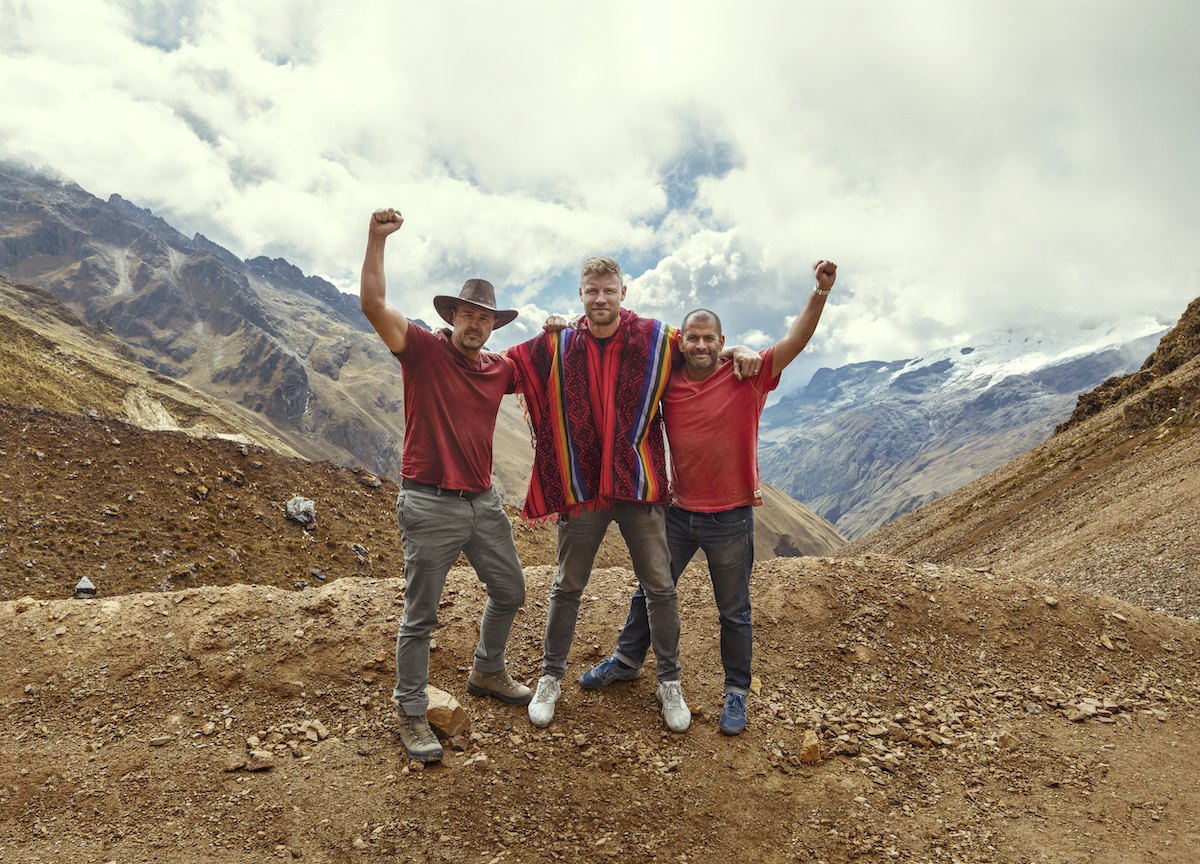 “I’ve been doing it… that’ll be five years soon, and it’s not always been easy. I don’t really want to talk about the [Chris] Evans era, because that was a very tricky period. It morphed on from that pretty quickly to being myself and Matt [LeBlanc] a lot of the time with bits of Rory [Reid].

“I really enjoyed working with Matt. He’s remained a really good friend, and I look back on the films that didn’t Matt, and I’m very proud of them. They were really good, but I’m afraid they were in the wake.

“They were being sort of tossed around, in the sort of the wake of the previous run, which was probably not my finest hour. But I think what we’ve got now is really good. I think it’s fantastic.

“Fred appeals to the ladies, which is brilliant and McGuinness appeals to the northerners. And I hopefully appeal to people that are geeks that like cars.

“It’s a decent chemistry and fair play to [the show’s bosses] Al Renton and Claire Pizey for seeing it, because I think when you put the names on a table, when they chose them, a lot of people went, ‘What are you doing?’ And I think Al and Claire said, ‘bear with us, just wait and see… hold my beer!”

Chris on Clarkson, Hammond and May

So does Chris ever have contact with the show’s original stalwarts of Jeremy Clarkson, Richard Hammond, and James May?

“James May is a good buddy of mine, so I’m in contact with him,” says Chris. “I know Richard, and we might exchange a message now and again. They are sort of career motoring journalists like me, so I’ve known them ever since I was a motoring journalist as well.

“Jeremy I don’t know at all. But obviously I’m a massive… I was a massive fan of his when I was younger. I still think he’s a brilliant broadcaster. They created an amazing Top Gear. It’s our job to try and maintain that.

“I think we’re doing a pretty good job at the moment. I don’t feel remotely threatened, and I’m really proud to be carrying on a new Top Gear.”

Top Gear returns to BBC America with the Nepal Special and all-new episodes this Sunday, August 30, at 8 pm ET/PT.