Manpreet (played by Rebecca Sarker) has started to rebuild her confidence on Emmerdale after the ordeal her sister Meena (Paige Sandhu) put her through and she was wanting to make her relationship with Charles Anderson (Kevin Mathurin) her priority. However, he has become distracted by the arrival of his long-lost daughter, Naomi Walters (Karene Peter), who has wanted little to do with him so far. By the end of Friday’s instalment of the ITV soap, she was no closer to giving him another chance but it seemed she was willing to cause some trouble for him and his partner.

The episode began with Charles having no idea his daughter and son, Ethan Anderson (Emile John), had arranged a lunch date.

When Manpreet overheard Marcus Dean (Darcy Grey) talking to Ethan about how his meeting was going with his sister, she quickly told Charles.

Wanting to help him reestablish his relationship with his daughter, Manpreet offered to go with him to interrogate Ethan.

However, they actually walked in at the end of the lunch date as Naomi thought she had been set up to speak with Charles.

Manpreet did her best to try and make Naomi see things from her father’s point of view but the newcomer wasn’t having any on it. 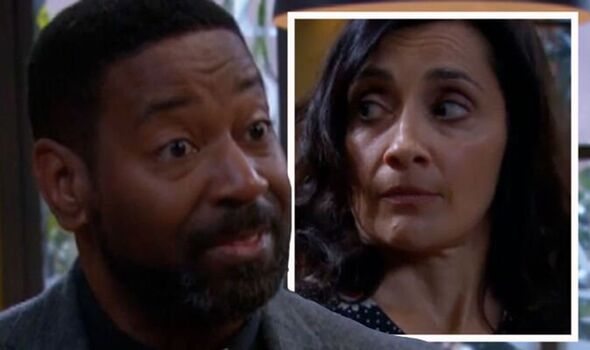 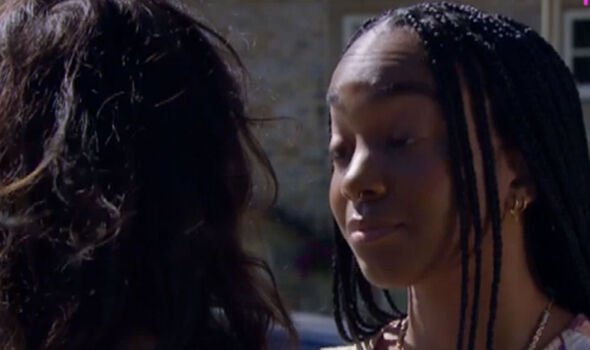 Following Naomi to the bus stop, Manpreet decided to issue her with a few home truths, regardless of who she was to Charles.

“Charles is a good man, you know,” the doctor began, with the newcomer asking: “Sent you here to tell me that, has he?”

“No, he would be livid if he knew I was here,” Manpreet continued, as Naomi rudely told her: “Do us all a favour and go away.”

Manpreet replied: “Naomi, I get life has dealt you a bad hand, but it’s not been a bed of roses for him either being the father of a child he wasn’t told about.

“This is your opportunity to get to know your real family,” the beloved villager remarked. 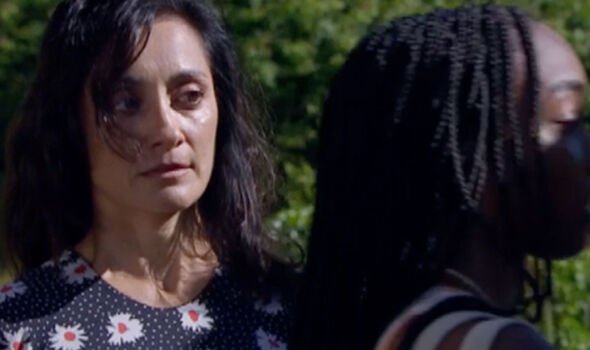 Are you threatening me?

Naomi bit back as she said: “So are you saying my adoptive parents aren’t real? What’s so great about families anyway?

“Did your sister not murder who knows how many people?” the newcomer asked as she stuck the knife in a bit harder.

Manpreet replied: “It was five at the last count but we are not talking about her,” with Naomi telling her: “You can’t pretend she doesn’t exist.

“You know, when Charles came to the bar that night, he failed to mention he had a psycho killer in the family. How do I know you’re not just as nuts as she is?”

Taking a sterner approach, Manpreet said: “If that’s what you really think, maybe you should go away.”

“And I don’t know, never come back,” the doctor continued, with the newcomer asking her: “Are you warning me off?”

“You seem to have made your decision already,” Manpreet added, with the young woman telling her: “No, you’re telling me what I think.

“I decide whether I get to know Charles and Ethan, not you and I don’t need your opinion and you should remember that as I don’t take kindly to people who interfere.”

“Are you threatening me?” Manpreet coyly asked, with the newcomer replying: “You tell me, you seem to know what I’m thinking.”

Manpreet then watched Charles’ daughter get on the bus and drive out of the village but this is not the last viewers will see of her.

How well do you know your British soaps?

How many times has Ian Beale been married in EastEnders?

What is the name of Bianca Jackson and Ricky Butcher’s son on EastEnders?

On EastEnders in 2002, who accidentally ran Jamie Mitchell over in his car which caused his death?

How many times has Corrie’s Steve McDonald been married?

What happened to Emily Bishop in Coronation Street?

Who murdered Maxine Peacock in Coronation Street in 2003?

Which incident in 1993 killed off four characters in Emmerdale?

When did the show stop being known as Emmerdale Farm?

On what date did Hollyoaks air its first episode?

What was the name of the much-loved Coronation Street pet dog who was put down in April 2020 after 14 years?

1996 saw the arrival of one of Hollyoaks all time bad boys and rival of Kurt Benson, but who was he?

Who is the longest serving character on Coronation Street?

Who shot Phil in EastEnders?

How many fires have there been at Corrie’s Rovers Return?

Get out of my pub, you’re no soaps fan

Next week, she will return and it could be she will try her very best to manipulate her father to turn against his partner.

The newcomer could explain to Charles how Manpreet threatened her to leave the village and she was scared for her safety.

Taking his daughter’s side, especially as he wants a relationship with her, Charles would not be pleased with Manpreet.

Following his admission to the hospital as a result of falling unconscious whilst talking to Naomi, the vicar might not want anything to do with his partner.

Could this be the end for Manpreet and Charles as they are torn apart forever thanks to the newcomer’s meddling?

What will Naomi benefit from this as she struggles to form a bond with Charles, despite getting rid of Manpreet?

Charles and his partner have a history which goes back years as they used to be engaged when Manpreet had an affair behind her husband’s back.

The couple built a life together when she was called Saira but on the day of the wedding, she jilted the vicar.

This ultimately led to an awkward reunion when Charles moved to the village but they were able to put their past behind them.

Will Charles really let this all go for the sake of his daughter’s sinister schemes?

Emmerdale airs weekdays at 7:30pm on ITV, with an hour-long episode airing on Thursdays.