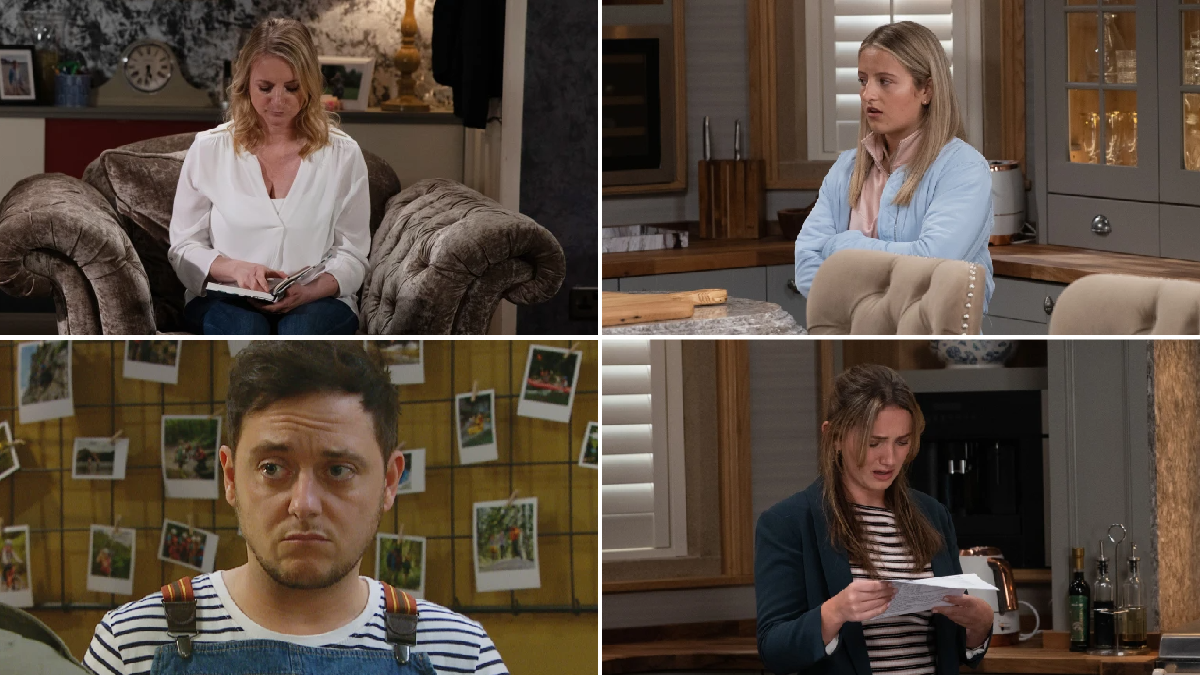 There are deadly events in Emmerdale village which are about to greatly impact several residents, not least of all Moira Dingle (Natalie J Robb).

As reminders of Holly’s death are brought to her, Moira confronts Suzy (Martelle Edinborough) about how she came about the picture and why it was used in the presentation at Take A Vow.

But will the truth come to light about how Suzy was involved?

Meanwhile, Dawn Taylor (Olivia Bromley) is hit with the sudden death of her friend and soon she makes a risky decision regarding the wellbeing of the young child left behind.

And there is a big surprise in store for Liv Flaherty (Isobel Steele) when mum Sandra (Joanne Mitchell) turns up while there is more progress for Marlon Dingle (Mark Charnock) as he extends a huge gesture to Paddy Kirk (Dominic Brunt).

Priya and Suzy excitedly prepare for the HOP/Take A Vow showcase, unaware the slideshow includes a picture of Holly Barton on the day she died. As Belle and Jai begin the presentation, not only does Priya struggle to see an image of herself without burns, but the problems escalate when the picture of Holly flashes up and Moira hounds Suzy for further information.

Suzy is trapped as Moira has recognises Holly’s dress as the one she wore the day she died.

Moira is desperate to know what happened but her hopes are dashed when Suzy lies. Soon after, Vanessa challenges Suzy, knowing she has not told the truth about Holly and Suzy finally recounts what really happened the night Holly died.

When Moira arrives the two both worry she’s overheard but instead Moira apologises for lashing out earlier.

Vanessa is disappointed when Suzy doesn’t use this moment to tell Moira the truth and instead Suzy pleads with Vanessa to continue to keep her secret. But will Vanessa stay loyal to Suzy or her friend Moira?

Liv is left frustrated when Sandra is forced to admit she owes four grand to a man named Terry. Sandra pleads her case to Vinny and Liv, adamant Terry has been taking advantage of her.

Liv allows Sandra to stay and blocks Terry’s number but there’s a sense Sandra is still lying about something.

Gabby’s sickened to receive a visiting order from Noah and throws it away, Amelia spots it in the bin. But on realising she’ll need ID to use the visiting order, she pilfers Gabby’s ID.

Marlon and Priya bond over their shared struggles.

Laurel’s secretly interested when Rhona tells her what time Kit will arrive and plans to make sure she sees him.

Before long, Liv and Vinny worry if they can trust Sandra. But they’re scared when a menacing Terry storms in, confronts Sandra and demands his money.

With Terry putting on the pressure for his money, Sandra’s relieved when Liv offers to pay the money herself. Later at the Village Hall, Vinny worries Liv’s plan to help her mother will backfire. Smug Terry takes their money, seemingly happy to be rid of Sandra.

In prison, Noah’s shocked it’s Amelia rather than Gabby who has come to visit.

Lydia senses an opportunity to get Amelia to confide in her and does her best to convince Amelia she can do better when Amelia confesses to her boy troubles. But could Charles’ sermon undo Lydia’s work?

Liv’s happy to hear Sandra is doing better, and she vows to find her a job.

Dawn reveals to Kim how her best friend has died from an overdose. Dawn’s upset to think that could have been her.

Paddy’s overjoyed when Marlon asks him to be his best man.

Dawn is initially unsure if she’ll attend the funeral of her friend. But buoyed by Billy’s support, Dawn resolves to attend. After the funeral, Dawn and friend Jade reflect on their past. Dawn knows it’s not a good idea when she agrees to go back to Jade’s. Upon arriving, Dawn finds a child at Jade’s threadbare house.

Dawn’s bewildered when a now drugged up Jade reveals the child (Clemmie) is Beth’s and Clemmie doesn’t even know her mum has died. Soon Dawn is unnerved when a dangerous man walks in.

Dawn tries to help Clemmie by offering to take her home with her for safety and even offers them money. But when it turns nasty, Clemmie grabs Dawn’s hand and after and exchange of money and her shoes Dawn and Clemmie leave.

When Dawn arrives in the village with Clemmie, Billy implores her to call social services and is worried when Dawn refuses. Billy concedes to letting Clemmie stay with them for one night. But can Billy convince Dawn to do the right thing?

Aware Jimmy will be home soon, Nicola knows she has to open up to him about the toll the attack has taken on her mental health.

Initially Nicola avoids the conversation by turning up for work at the cafe. But before long, Jimmy reels from hearing Nicola’s confession and resolves to be there for her.

Nicola feels stronger for his support. Back home, Nicola shares the video of her attack, calling for information on her attackers. Jimmy uneasily supports her decision.

Matty struggles with the fact he was absent for Holly’s death.

Mandy’s taken aback when Vinny tells her Liv’s mum has moved in. Later, Liv’s happy with Mandy’s offer to help find Sandra a job. And soon Mandy offers Sandra a job at the salon.

With the video of Nicola’s attack gaining more attention, Nicola is determined to bring the girls responsible down.

Bernice is shocked to see Nicola has posted the video of her attack online. Soon Nicola is armed with the name of one of her attackers and calls PC Swirling with the update.

At the Salon, Sandra is shown the ropes. But Bernice isn’t thrilled Sandra is shadowing her for the day. How will she get on?