Emmerdale fans saw two families’ long-running feud continue this evening as Belle Dingle (played by Eden Taylor-Draper) and Jamie Tate (Alexander Lincoln) took the next steps in their relationship and moved into Home Farm together. The Tate’s and Dingle’s have been rivals for decades, and Belle’s betrayal did not go down well with those at Wishing Well Cottage. To make matters worse, Sam Dingle’s (James Hooton) outburst cost him his job, but it was a comment Lydia Hart (Karen Blick) made that suggested Belle was forced into choosing Jamie.

“Sorry,” Sam said walking back into the cottage. “Stuffed it right up.”

“It’s not your fault, perhaps it was her ladyship pulling strings behind the scenes,” Lydia said referring to scheming Kim Tate (Claire King).

“No it was all Jamie – Belle backed him up,” her husband explained.

They were interrupted by Cain Dingle (Jeff Hordley) who walked in: “I got your text, what is Belle doing? 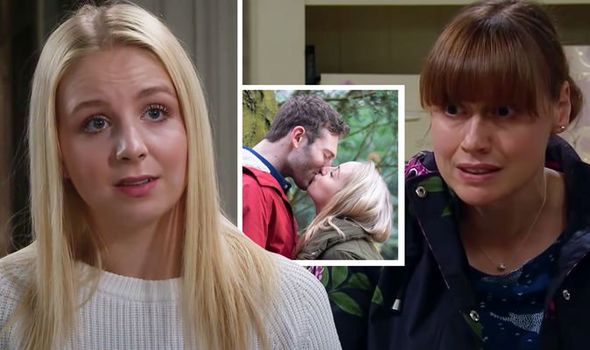 “What happened exactly – are you sure you got it right?”

“I tried to make her see him for what he is and make him come home,” Sam explained. “And me and him had a ruck and he fired me.

“I asked Belle if she was alright with it and she said ‘yes’, and told me to go.

“Now I’m not earning, I’m sorry,” he said to his wife and she replied: “Don’t worry about that now.”

Cain interrupted: “I’ll speak to Moira, she’ll get you some work up at the farm.”

“Cheers, that’s not everything though,” Sam added.

Worried, Lydia remarked: “Oh no, what?”

“She’s moving in with him. I still don’t see how she can turn against her own family and side with them, she knows better!” The frustrated farmer explained.

“There was no talking to her when she was with Dr. Bailey either, that’s when she had her breakdown,” Sam added.

“Maybe she’s off her meds?” Cain suggested and Lydia revealed: “Don’t go off on one, but her tablets are still on the bedside cabinet.”

“Right that’s it, I’m going to go speaking to her,” Cain hollered but Lydia stopped him and said she would ring Belle for a chat.

In a later scene, the veterinary receptionist arrived – much to her surprise – to a house full.

She claimed she had not taken her medication for one day, but Lydia did not look convinced.

Perhaps Belle is in fact pregnant with Jamie’s child and is moving in with him because that is the right thing to do.

To add to this, maybe she can’t take her tablets while with child?

After all, this would well and truly join the two families together.

Emmerdale airs Monday, Wednesday and Friday at 7pm on ITV.