The door remains open for Andrew Denton's return to the Seven network after the TV host suddenly pulled the plug on his popular chat show, Interview.

In a surprise announcement posted to Facebook on Friday evening, Denton – along with his Legacy Media co-executive producers Jon Casimir and Polly Connolly – revealed the team had decided to "axe itself". The cancellation also applied to the show's accompanying podcast. 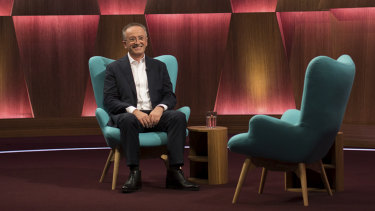 "It has been a delight to make the show for Seven, who have given the show every opportunity to shine, and have confirmed they would have recommissioned it for next year. We apologise for taking a different path," the statement read.

"We're proud of the conversations we've put on screen and into podcast, but it feels like the right time to move on."

The news was met with confusion by Denton's loyal fans over the weekend, with many taking to the program's social media pages to question the decision to end the show.

A Seven spokesperson, however, denied suggestions there was any strain behind the cancellation.

"We have loved and enjoyed every moment of Interview. Andrew and his team know the door is open any time he wants to talk," the spokesperson said.

Co-executive producer Casimir declined to expound on the reasons behind the decision, saying the team "said what we wanted to say in the Facebook statement".

A network source said that, despite the seemingly sudden announcement, Denton had approached Seven "some time ago" suggesting he needed a break from the show.

"We have a very good relationship… We always let him call the shots. If he says, 'Look, that's it, I need a break, I've loved it but I don't want to do it again next year exactly like this', that's it," the source said.

"In creative work, you can never force someone – like the opera singer who says I've got a cold; if she's got a cold, she's got a cold. We've got the greatest respect for them. The show might look easy for that hour, but the research and the effort and prep that goes into all that background, it's a big ask."

The show – which premiered on Seven in April last year, and featured headline-grabbing chats with Magda Szubanski, Angry Anderson, and Madonna – had achieved steady, if not spectacular, ratings across its two seasons, peaking with 634,000 viewers across the five capital cities in last week's season finale with Julie Bishop.