Shawn Levy, who directed Ryan Reynolds and Mark Ruffalo in Netflix’s ‘The Adam Project’, appears to tease the Avenger crossover with the Merc with a Mouth in the upcoming ‘Deadpool’ movie.

AceShowbiz –Deadpool may finally be a part of MCU in its next installment. Having been a part of the big Disney family since the acquisition of 20th Century Fox, the mutant could be teaming up with an Avenger in “Deadpool 3“.

It’s the movie director Shawn Levy himself who ignited the rumors with his tweet on Sunday, March 20. The filmmaker, who recently directed Ryan Reynolds and Mark Ruffalo in Netflix’s “The Adam Project“, appeared to tease the appearance of Hulk in the third Deadpool movie.

On his Twitter page, Levy posted an image of both actors on the set of “The Adam Project” with references to their Marvel characters. They lied on the grass with stickers of Deadpool and Hulk in view. “Little did I know…,” the helmer captioned the snap, tagging both Reynolds and Ruffalo and adding “#Deadpool”. 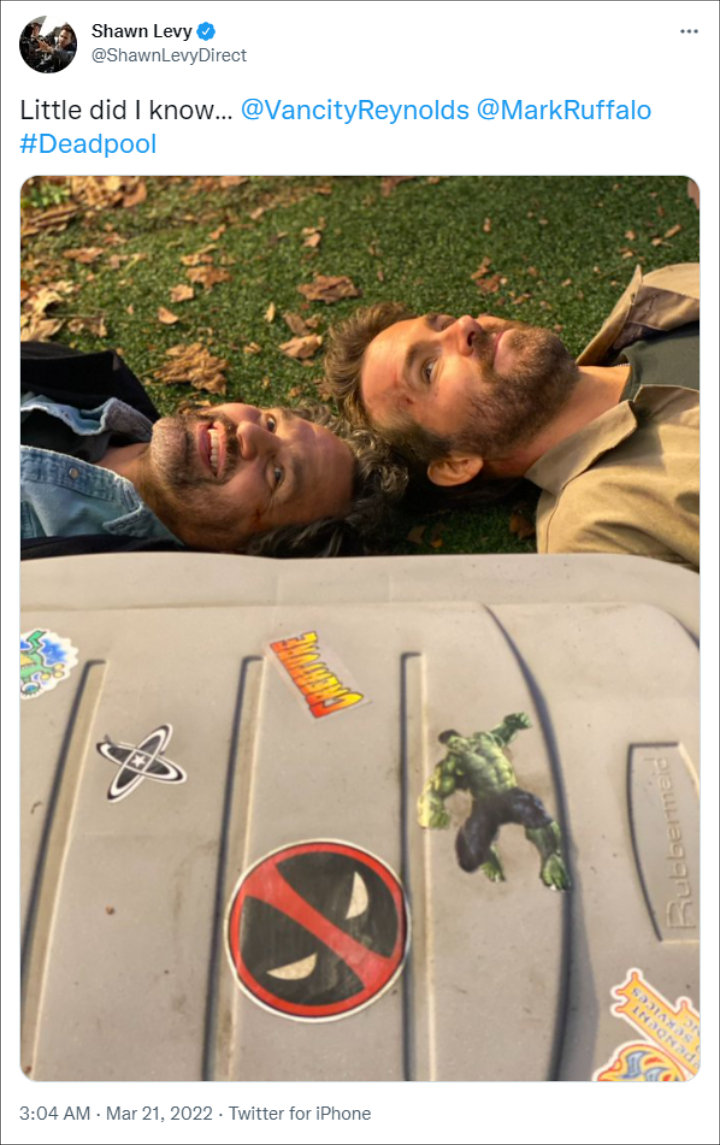 Needless to say, his tweet sent fans into a frenzy, with one gushing, “If Hulk meets Deadpool that would be awesome.” Another hopeful fan reacted to Levy’s tweet, “Would be epic.”

Hulk’s possible presence in “Deadpool 3” aside, there has been a push for Wolverine’s appearance in the Merc with a Mouth movie. If there’s anyone who could make it happen, Levy is the answer. The director recently talked to ComicBook.com about his desire to put Reynolds and Hugh Jackman in the same movie together.

“I’m not going to say where or how, but I absolutely will confirm my intention and determination to be the lucky son of a b***h who puts those two magnificent gods in the same movie together,” he said. “That will happen, and that will be me.”

Reynolds, meanwhile, is all for Levy handling “Deadpool 3”. “That would be amazing,” he told the same outlet in a separate interview. “I say write to Kevin Feige, care of Marvel Cinematic Universe at whatever Buena Vista Way. I don’t know where it is, but yeah, that would be nice. That would be a dream. That would be dream come true.”

It’s currently unknown when production on the new Deadpool film will begin as Reynolds is currently taking a little break from acting to spend more time with his family. He previously also teamed up with Levy in “Free Guy“, which was released in theaters in 2021.