BBC Breakfast’s Dan Walker and Louise Minchin welcomed DIY SOS host Nick Knowles onto the programme to chat about tomorrow night’s Children in Need special of the long-running show. Moments into the interview, however, Dan had to swiftly change the topic of conversation after the guest had brought up the presenter’s recently published book titled ‘Remarkable People’ as he was “not allowed” to speak about it “on the BBC.”

The interview had been plagued by technical difficulties earlier on in the show, meaning they had to halt proceedings until Nick’s sound had been sorted out.

Luckily, Nick was back on the programme right at the end of today’s show for another attempt at a chat.

Louise said: “We lost Nick Knowles a little bit earlier but fingers crossed he’s here and he’s going to tell us about the new series of DIY SOS which starts on BBC One tomorrow with a Children in Need special!”

“Yes I can hear you, can you hear me?” Nick asked, and the hosts confirmed they could. 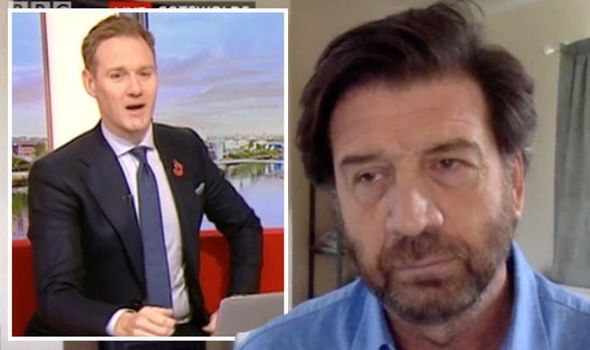 Viewers had been shown a clip from the upcoming instalment, which led Dan to remark: “We saw the little film of DIY SOS, it’s lovely to have you on because it’s a brilliant programme.

“And you know what it’s like, it touches the hearts of so many people watching it every week and this big build seems particularly special.”

Speaking of what was to come, Nick said: “It’s amazing for many different reasons but the heart of it is just the sense of having to build during Covid, again 100s of people volunteered.

“We couldn’t take everyone who volunteered, people were offering materials and it just goes to show what we can do when we get everybody together and do stuff,” he added, acknowledging the overwhelming response from members of the public.

“And we’ve got loads of examples of that from all over the country,” he noted before making an unfortunate slip-up.

Addressing Dan, Nick remarked: “In fact, your book is about that, isn’t it? About people coming together in communities to look after each other.”

But Dan had to shut Nick down over his comment, noting: “I’m not allowed to talk about that on the BBC, Nick!”