Speaking on Wednesday (May 26) on BBC Breakfast, Walker asked the MP why he had defended Cummings last year following his illegal trip to Barnard Castle amid fresh allegations he has made against the Prime Minister. Shapps criticised the questioning as a factor that dismissed other important topics to be discussed, such as rail investments.

“My Shapps surely this is a bit of spectacular backtrack,” Walker stated.

“Because this is a man who – when he was under fire a year ago for the trip to Barnard Castle you were one of those who came out on TV and defended him.”

“First of all I was actually on TV because I was doing the press conference that weekend to talk about a billion-pound investment for the A66 -” Shapps began before Walker cut in.

He asked: “Did you defend him or not?” Shapps replied: “I thought he was right at the time to stand by his family, to go into effective quarantine and that’s what he did. 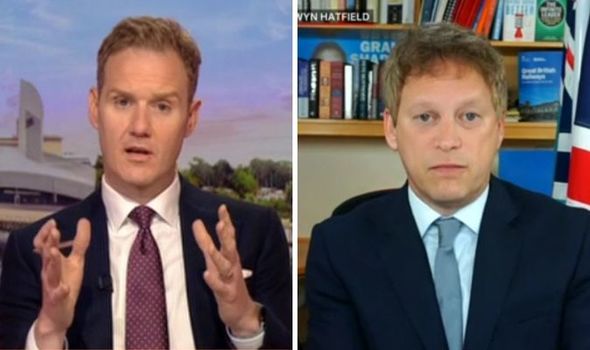 “I accept when you look back on it, it was a moment which in the public’s mind undermined the wider messages and I accept that.”

The MP continued: “But I thought he was doing what he thought was right by his family at the time.

“But I do find this obsession about one single advisor a bit odd. As I say, I’ve got announcements today – the reason I’m on your programme is to talk about over £400 million of rail investment, which is actually going to change peoples’ lives and journeys.

“Instead, we’re obsessed by this Westminster bubble, which when we get to actual elections which has been proven, people are more interested in the things which are going to have an impact on their lives like 73 percent of people having their first injections, 44 percent having the second injections.”