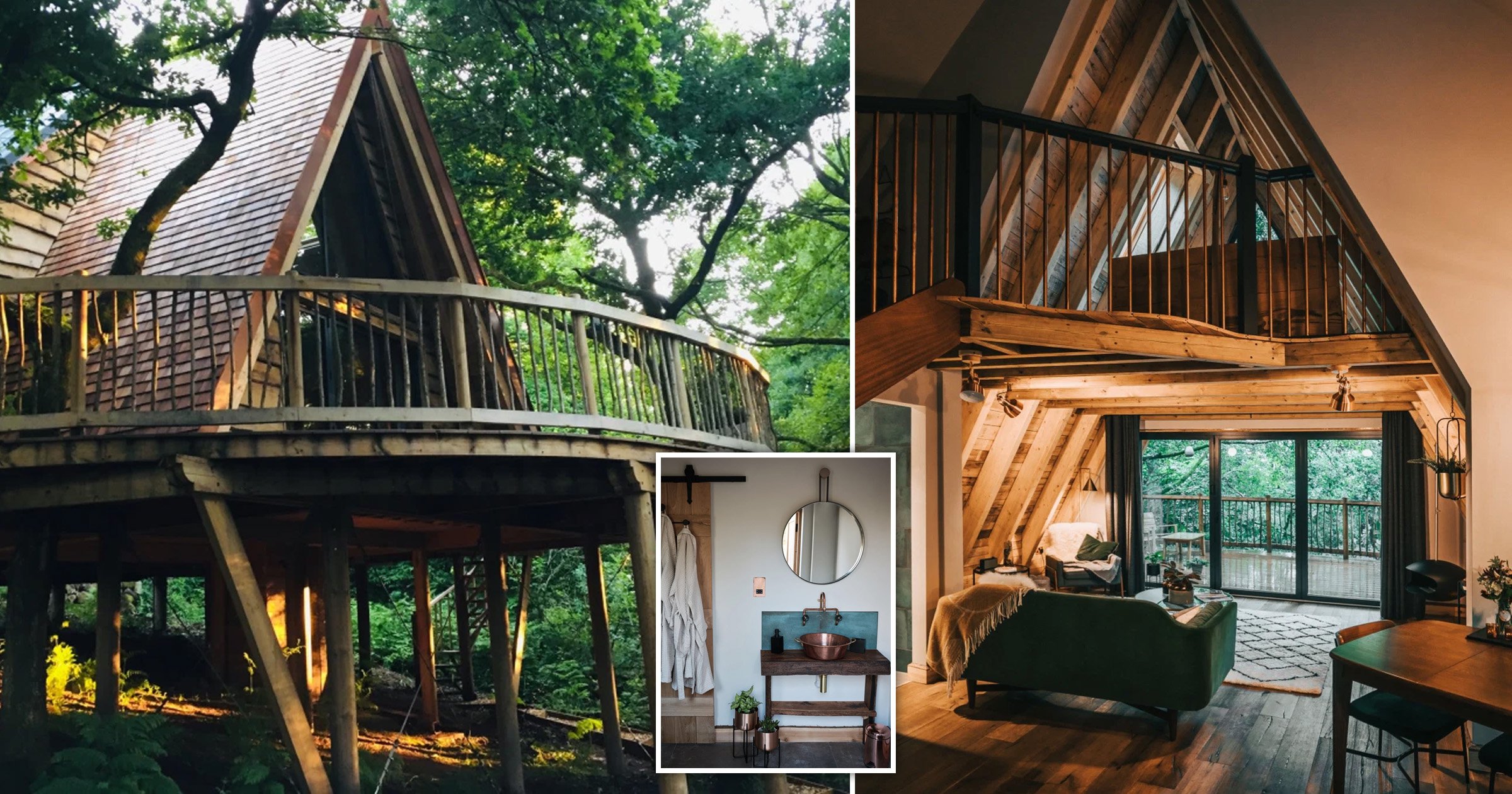 Many properties bill themselves as an escape from reality, but The Hudnalls Hideout truly fulfils the brief — requiring a torch, a map and a car-free ramble along dirt tracks to reach this perfect example of rustic-luxe treehouse chic.

Situated in the heart of a forest glade in the Wye Valley, this A-frame treehouse, the first of its kind in the UK, is a labour of love that sprang from Sarah and Ade Orchard’s round-the-world backpacking trip in 2004.

Inspired by the quirky B&Bs, cabins and campsites they stayed at in Sri Lanka, the Maldives, Singapore, Australia, New Zealand, the Cook Islands, the US and Canada, the couple came home dreaming of building their own woodland retreat.

‘We stayed in our first treehouse on Salt Spring Island in Canada and it opened our eyes to glamping before we’d even heard of the word,’ says Sarah, a marketing consultant.

‘We were also inspired by a converted church in New Zealand, with galvanised steel panels in the shower and slabs of kauri tree as kitchen worktops. It made us determined to create something similar in the UK.’

After ten years hunting for the right spot, they fell in love with the Wye Valley in Gloucestershire while on holiday in 2014.

‘It had to work from a lifestyle point of view as Ade likes fishing and I love horse riding, and the dramatic landscape here just hit the spot,’ says Sarah.

‘We’d house hunt at weekends and found lots of properties we couldn’t afford, so I applied to the BBC show Escape To The Country. Jonnie Irwin and the crew were amazing — they showed us a quirky house in a woodland location and we knew it was for us.’

The treehouse build started in 2019 and took eight months, with more than 100 tons of materials including main timbers seven metres long, moved mainly by hand due to a lack of road access.

‘The most renovation work we’d done before was to knock out a wall and extend a kitchen,’ laughs Sarah, ‘but we met glamping guru Kate Morel at The Glamping Show and found our treehouse builder through her.

‘We decided on an A-frame shape at the front with a more traditional shape at the back and a bedroom at the top of the A-frame so that you can feel up close with the birds in the treetops.’

Many supports were dug into the hillside by hand after Ade and Sarah did a survey to check where all the tree roots were. They had to remove just one diseased silver birch and designed the layout of the 11m-high, oak-clad cabin around two immature oaks which grow through the circular wraparound deck, inset.

Accessed by a suspended wooden bridge from a concealed forest track, you enter a cosy modern kitchen with dark wood cabinets and handmade open shelving in pippy oak.

Tactile natural materials abound throughout; debarked handrails on the staircase and upright spindles on the deck were repurposed from traditional coppiced hazel in the woodland, while the waney edge cedar skirting boards came from a local sawmill.

The living room is a cosy idyll with a 1970s-style suspended bioethanol fireplace and a green velvet sofa looking out on to the forest. Sheepskin rugs, cushions and faux fur throws create a cocooning atmosphere.

The nest-like bedroom above has apex windows where you can watch the birds feeding from bed and feel as though you are floating in the treetop canopy. There’s no TV or wifi — the only connection here is to nature.

In addition to a wet room with a copper rainfall shower for two, there’s also a decadent outdoor bathroom featuring an oversized copper bathtub and an oxidised steel screen that’s backlit at night, handmade by Dragonswood Forge in Herefordshire.

‘You can have a shower at home but having a bath outside on the deck is just wonderful and the copper keeps the water hot so you don’t get cold,’ adds Sarah. ‘The bath and fern screen are my favourite pieces while Ade’s is the birdfeeder at the top of the A-frame, which was the cheapest yet most effective thing we’ve done.’

The pair partnered with Made.com to create a modern, ambient vibe, opting for a colour scheme inspired by the surrounding moss and ferns to bring the outside in.

‘It’s very luxurious but we didn’t want it to be like a hotel room. I approached Made.com because their design-led interiors were the best Scandi/retro fit for our hideout vision.

‘All the furniture was unpacked at our house then walked down by us — we were pushing wheelbarrows filled with furnishings and crockery, trying not to break anything. I walked 28,000 steps that weekend.’

Outside there’s a stunning stained-glass hanging and you can practise yoga, learn how to make pizza in the wood-fired oven, forage through surrounding woodland, enjoy the services of a private chef or simply cosy up with a drink by the fire pit.

Ade quit his job as a research and marketing executive to run the hideout and they started renting it out on Valentine’s Day last year but had to close five weeks later due to the pandemic.

‘It was very frustrating after a project that was five years in the making,’ says Sarah, ‘but we’ve just reopened and the guests are very happy to be back.’ The treehouse even received the celebrity seal of approval on Channel 4’s Extraordinary Escapes when Sandi Toksvig and Prue Leith came to stay.

‘After the show went out, we took 50 bookings in two days and next year has filled up, too,’ says Sarah.

‘It’s a special space. We’ve had more time than we anticipated to stay in it ourselves over the last year and have fallen back in love with it.’

How to get your Metro newspaper fix

Metro newspaper is still available for you to pick up every weekday morning or you can download our app for all your favourite news, features, puzzles… and the exclusive evening edition!