Coronation Street viewers saw Shona Ramsey (played by Julia Goulding) return to Weatherfield a few weeks ago, after receiving treatment in Leeds for a brain injury she sustained as a result of the Christmas Day siege which saw her shot. Within moments of her appearing on screen, it was obvious how much the injury had changed her. But according to new soap spoilers, there is a chance she could regain all of her memory after an interaction with David Platt (Jack P Shepherd) next week.

For weeks, David sat by Shona’s bedside and held her hand, praying she would make a full recovery and open her eyes.

Well, she did the latter, but upon waking up, she failed to recognise those around her.

Following more tests, it soon became clear that Shona had suffered from memory loss – the extent no one really knows.

But one thing she was certain; she didn’t want to be anywhere near David. 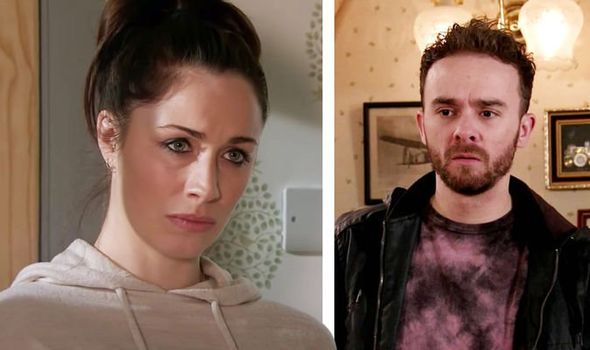 After much discussion, everyone decided the best thing for Shona to do was to move in with Roy Cropper (David Neilson).

During an interview with the actor who plays David, Jack spoke about this scene.

Viewers will tune in to see David and Shona leave the Bistro together: “Shona and David come out of the Bistro and Shona has Ray’s wallet,” Jack revealed.

“David starts laughing and Shona thinks he is taking the mick out of her so she throws the wallet and storms off.

“David catches up with her and explains they met because Shona stole David’s wallet.”

There will also be another occasion which suggests Shona is starting to piece together the puzzle of her and David’s relationship.

Other spoilers have revealed how Shona will make a pass at David.

It comes after she has a conversation with Gemma Winter (Dolly-Rose Campbell).

The mother-of-four explained how Shona and David had a great relationship before her accident.

Later that evening, Shona invites David to Roy’s flat, but he is left shocked when she tries to kiss him.

Viewers will see Shona suggest they go to bed in hope of re-jogging her memory.

Will he agree to go through with it?

It comes after the actress who plays Shona spoke about her memory and why she knows who Clayton is.

During an appearance on This Morning, Julia said: “It’s a funny one with Clayton, she remembers him as 14.

“That’s when he started being nasty because of the influence from his father.

“His mask begins to slip again and those evil little ways show through. I think she’ll get wise to his games,” she added.